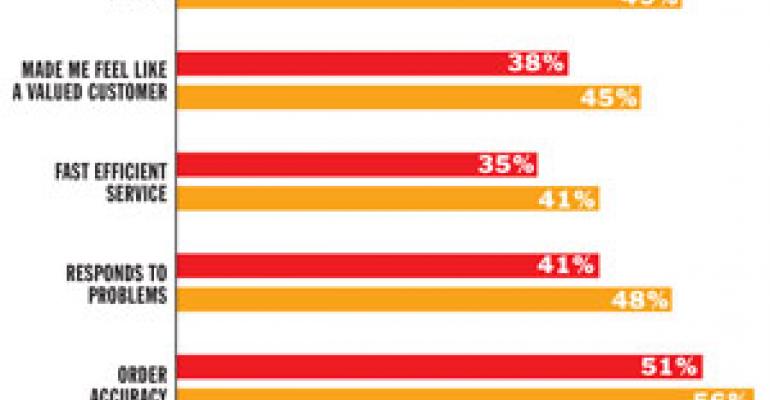 NPD: Good service is great for business across all segments

Deals and discounts may get cash-strapped consumers through a restaurant’s door, but excellent customer service is what will keep them coming back—even after the economy improves and menu prices increase, say officials at The NPD Group.

According to new data from the Port Washington, N.Y.-based market research firm, consumers rate service high on the list of reasons for visiting restaurants, despite the tough economy. But not all restaurants receive high marks in the area. Consumers are more satisfied with the service they receive at independent restaurants than what they experience at chains.

“Service is part of the value equation; it’s not just price,” said NPD analyst Bonnie Riggs. “Sometimes we lose sight of that. It does have an impact, and it does build loyalty.”

When consumers who cut back on restaurant visits were asked by NPD what would entice them back, service attributes were high on the list of responses. While “price discounts on a regular menu item” and “coupon for free item” were the biggest lures, followed by smaller “portions at lower prices,” another popular response was “polite staff.”

Respondents said that independents in both the casual-dining and quick-service segments delivered more pleasant experiences than chains, NPD found.

Not only are the most recent customer satisfaction ratings for casual-dining chains low, but NPD also found that they’ve been on the decline for several years.

“Not only am I paying more when I visit a casual-dining chain, but the service is not up to par when compared to indies,” said Riggs of many consumers’ perception.

It appears that consumers are showing their appreciation for casual-dining eateries that give good service by visiting more frequently.

In the quick-service segment, only major chains maintained traffic in the most recent quarter, mainly through unit expansion. Still, the data reveal that consumers do not perceive the big fast-food chains as doing as good a job with customer service as their independent competitors.

At $4.80, major chains have the lowest check averages in the quick-service segment, followed by small chains at $4.77 and independents at $5.61.

“The lower the price point, the lower the expectations,” said Riggs. “[QSR] will have to ante up when it comes to service.”

One reason chains may not be delivering service as well as they can is because many have cut their training budgets, observers say.

According to the “2009 State of Training and Development in the Hospitality Industry” report from the Council of Hotel and Restaurant Trainers, or CHART, in the past 18 months more than half of foodservice operators surveyed had reduced their training budgets.

“Especially in this economy, people are looking for a good experience…places that make them feel good, as opposed to just food,” said John Isbell, president of CHART, on why customer service training is more important than ever. “If [operators] are smart…they’ll hire the right people, train the right people.”

Tim and Nina Zagat, founders of the Zagat restaurant guides, agree that more training is the solution to the industry’s service woes. In a recent blog post, the couple said “service is the weak link in the restaurant industry.”

Consumers may not expect exceptional service at major fast feeders, but some quick-service chains have long been committed to training their employees to give it. Many also note that they have reaped the benefits.

At Prairie du Sac, Wis.-based Culver’s, crewmembers have always been trained to cheerfully bring customers’ orders to the table, offer to get additional items and bus tables, officials said. The commitment to guest service has helped the burger and custard chain achieve positive same-store sales growth despite the recession.

“If you’ve [only] got $5 to spend, where are you going to go to? The place that treats you well,” said James Blystone, Culver’s director of marketing. “[We train] our people that our guests are an extension of our family.”

To ensure that service is as good in Kansas City as it is in Phoenix, Culver’s has owner-operators in each of its 400 restaurants.

“That allows us to know our guests and know our communities,” said Blystone. “We spend a lot of time talking to our franchise business partners, making sure every guest leaves Culver’s happy.”

Recognizing the power of good service to maintain loyal customers, some savvy quick-service operators have recently adopted similar full-service-style practices. For example, a few years ago Carpinteria, Calif.-based Carl’s Jr. launched its now-famous Six Dollar Burger and, along with it, its Six Dollar Service program.

While the chain had always delivered guests’ orders to their tables, Carl’s crewmembers are now trained to offer drink refills, bus tables and open doors for customers.

“[These are] just small elements that add up to a better experience,” said Noah Griggs, executive vice president of training for the Carl’s Jr. and Hardee’s brands. “[Guests] come back, and its gives you a win-win.”

The program has been so successful at Carl’s Jr. that CKE has since rolled it out at the Hardee’s brand. According to Griggs, independent research reveals that both concepts’ service ratings have significantly improved since implementing program.