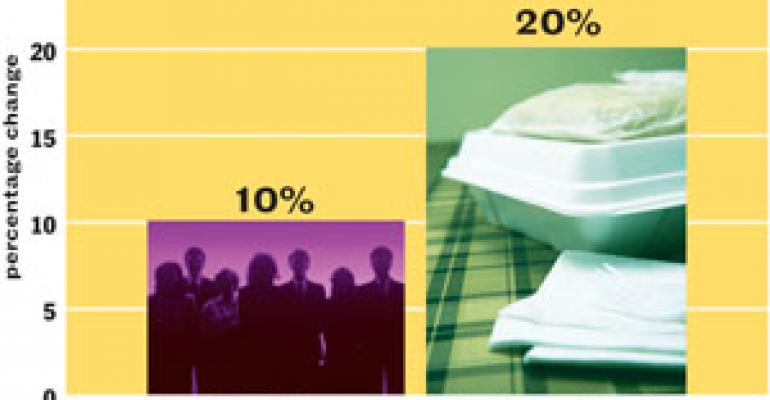 Operators may be consumed right now with putting butts in their dining room seats, but they should be figuring out how to get their food into the hands of consumers sitting at home, according to The NPD Group.

The number of restaurant meals eaten at home, either carried in or delivered, is expected to grow faster than any other category in the next decade, the Port Washington, N.Y.-based research firm reveals in its new report, “A Look into the Future of Eating.” In fact, the segment’s growth will outpace population growth.

According to the report, the population is expected to increase 10 percent between 2008 and 2018. During the same time period, the number of restaurant meals eaten at home is projected to grow by 20 percent.

“[Operators need to] understand that this is a growing trend,” said Ann Hanson, the report’s author and director of product development at NPD. “People are making trade-offs now, but these longer, fundamental behaviors will persist into the future.”

Among the convenience foods expected to become more important in the next decade are easy meals, such as fruit, snacks, yogurt and bars; and salty or savory items, such as snack foods, chips, crackers, popcorn, cheese, nuts, seeds, pretzels, curls or puffs, pickles, olives, and chips. By 2018 the number of both easy meals and salty or savory items consumed at home is expected to grow by 16 percent.

“As the population ages, levels of concern regarding food and nutrition are expected to rise,” Hanson said. “For this reason, better-for-you food options are forecasted to grow strongly over the next 10 years.”

Among the foods projected to decline in popularity over the next decade are quick-assembly lunch and dinner foods, which are dominated by sandwiches; certain breakfast foods; and side dish breads.

Not only are the foods eaten at home changing, but so are the people who order them. As Generation Y, or those people born between 1976 and 1989, ages over the next decade, the demographic is expected to show the largest percentage gain in eating restaurant meals at home.

Regardless of their ages, Hanson said consumers purchase restaurant meals to eat at home for convenience, and that desire for convenience can be met in many ways. For many consumers that means reducing or eliminating the amount of food preparation required. But restaurants aren’t the only businesses attempting to meet consumers need for convenience. Today’s consumers have a wealth of choices from which to purchase meals that require little or no preparation, including restaurants, grocery stores, superstores and convenience stores.

“To protect restaurant meals from competition…operators need to ask, ‘How satisfied are consumers with these meals? Are there ways to make [them] better?’” Hanson said. “[Carry-in and delivery are not] just about the food.… [It’s] the process, the experience.”

Many restaurant operators have recognized the growing importance of carry-in and delivery and are doing everything from rolling out interactive mobile-ordering platforms to making their menus more family friendly to delivering more complete meal packages.

To make ordering easier and more fun, Pizza Hut on July 15 announced the launch of a new iPhone and iPod Touch application targeted at its mobile-centric customers. The free app allows users to virtually build their own pizzas, choose their preferred style and sauce for the chain’s WingStreet chicken wings, and order items from the new Tuscani Pasta line. Because even a few minutes can feel like forever when you’re hungry, the app also features a game, Pizza Hut Racer, which users can play to pass the time until their food arrives.

“As more of our customers are integrating the iPhone and iPod Touch into their everyday lives, Pizza Hut wants to be right there with them,” Brian Niccol, Pizza Hut’s chief marketing officer, said in a statement. “As a longtime category leader in innovation, creating an App Store application is just one more way we are helping customers place orders in a way that best fits their mobile lifestyle.”

Pizza Hut isn’t the only major chain trying to make ordering easier through new mobile platforms. This spring Burger King launched an app that enables Whopper lovers to order from their iPhones. And in June, Dunkin’ Donuts launched the concept of a “Dunkin’ Run,” a new online form that facilitates group ordering and can be accessed from a computer or a mobile phone.

To grow its share of meals eaten in the home, Toppers, a 26-unit pizza delivery brand based in Whitewater, Wis., is trying to deliver a restaurant-style experience.

“When you get delivery, the customer isn’t in the store,” said Scott Gittrich, Topper’s chief executive. “They are not experiencing the brand, so your delivery person is the walking brand. It’s no different than a waiter.”

Toppers delivery people behave a bit like waiters, too. They bring customers their food and then offer them everything they need to enjoy a mess-free meal: paper plates, napkins, utensils and condiments such as grated Parmesan and hot peppers. They even tell customers about upcoming specials and provide irreverent giveaways, such as little plastic Army men, lip balm and humorous magnets.

“It’s fun to go out,” Gittrich said, “and it’s fun to have going out brought to your house.”

Fazoli’s, a quick-service Italian concept based in Lexington, Ky., is hoping to meet the needs of its carryout customers better by revamping its family meal offerings.

“We have started hearing how guests patterns are changing,” said Fazoli’s brand director Stacy Hettich. “They view taking it home as a less expensive way to eat at a restaurant.”

In April, the 250-unit chain began testing an upgraded menu of its to-go meals, adding more than 30 new items priced between $14.99 and $24.99. The meals, which feed four to six people, include salad as well as paper plates and utensils upon request. Since initiating the limited-store test, the incidence of family meals ordered has more than doubled, Hettich said.

“[Customers] want to remove any task or chore associated with dinner,” Hettich said. “They want to come home, eat it and be done.”