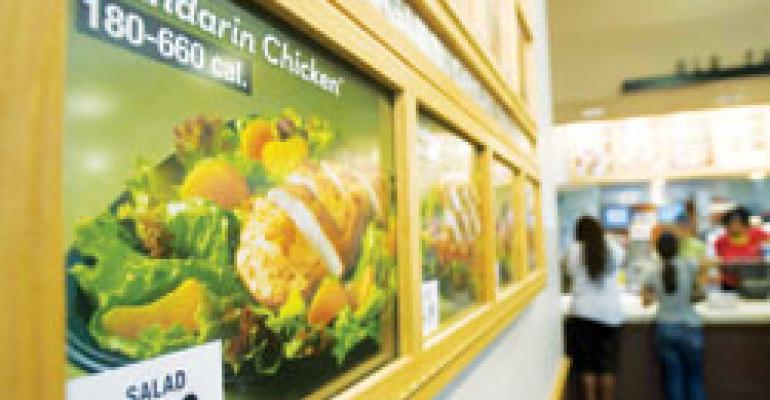 No big gains in the war on obesity, studies find

Two recent studies showing that menu-labeling initiatives and fast-food bans do not appear to be doing their intended jobs of improving eating habits—especially of lower-income people—are sparking discussion that more comprehensive programs are needed to curb the nation’s weight problems.

One of the studies, conducted by the Rand Corp., a nonprofit think tank that focuses on public policy, found that despite a year-old moratorium on fast-food restaurants in south central Los Angeles, residents did not improve their diets or reduce obesity, mostly because many of their food purchases are made at convenience and liquor stores.

The other study, conducted by researchers at New York and Yale universities, determined that only 54 percent of lower-income customers in New York, where menu labeling has been in effect since July 2008, said they noticed calorie postings on menu boards, and just 28 percent said the information affected their ordering.

“I really hate to say this, but I’m not surprised because—and this was one of our concerns in moving ahead with [menu labeling]—this information was and has been available for years,” said Rick Sampson, president and chief executive of the New York State Restaurant Association, which strongly opposed the mandate.

“There’s been food labeling on products in grocery stores for at least the last 18 years,” he said. “And even though all of the calorie content and nutritional information has been available all of those years, we still have an obesity problem. We’ve said all along that you can print the information and post it, but if the consumer is not educated correctly, the situation will never change. The government is trying to make this an industry problem and it’s ludicrous. Nobody, including the industry, is pleased with the problem of obesity.”

In Los Angeles, city council members last year passed the Interim Control Ordinance, which banned the building of any new quick-service restaurants in a 32-square-mile section of the city, including parts of South Los Angeles, Crenshaw, University Park, Baldwin Hills and Leimert Park. The ban was extended in June and is in effect until March 14, 2010, but could be extended again.

“The Los Angeles ordinance may have been an important first by being concerned with health outcomes, but it is not the most promising approach to lowering the high rate of obesity in South Los Angeles,” said Roland Sturm, the study’s lead author and a senior economist at Rand. “It does not address the main differences we see in the food environment between Los Angeles neighborhoods, nor the diet of residents.”

Despite earlier reports of a higher number of fast-food restaurants in the area, researchers said that the neighborhoods included in the ban had no more fast-food chain restaurants per capita than any other part of the city—though the area does have more small food stores and other food outlets serving high-calorie snacks and sodas.

The researchers concluded that more emphasis needs to be placed on reducing the consumption of high-calorie snacks and beverages.

In the New York study, called “Calorie Labeling and Food Choices: A First Look at the Effects on Low-Income People in New York City,” researchers looked at the ordering habits of customers frequenting McDonald’s, Wendy’s, KFC and Burger King in economically challenged neighborhoods in the city’s five boroughs.

Led by Brian Elbel, an assistant professor at the New York University School of Medicine, researchers found that not only were few people swayed by posted nutritional information, but receipts revealed that many actually ordered items with more calories even though nine out of 10 claimed they made better, more healthful choices because of the calorie postings.

“Clearly, obesity is a large and growing health problem, and quite simply, the methods employed to educate consumers haven’t worked very well,” Elbel said. “We wanted to look at New York because it was one of the first public policies implemented to try and change the way people eat.”

Elbel noted, however, that data for the study may have been collected too soon: the information gathering took place only one month after the ordinance went into effect.

“Maybe consumers needed more exposure to these labels,” he said. “They told us they went to eat fast food five times a week, and this was before the city started doing its education campaign. Information tends to be more influential when we see it over time.”

Margo Wootan, director of nutrition policy for the Center for Science in the Public Interest, said the study was not necessarily indicative of whether menu labeling is affecting ordering patterns because it did not look at a large enough sample of people.

“My first thought is that this is one little study in a whole body of evidence,” she said. “Scientists don’t look at just one study; they look at the totality of evidence. One other thing along those lines is this study’s limitations. It wasn’t representative of the whole population of New York; it only looked at a subpopulation in a couple of neighborhoods.”

Elbel said he and his team intend to continue tracking menu labeling and plan to widen their research to include other, more affluent neighborhoods to see what effect calorie posting is having on the residents who live there.

Wootan also noted that the majority of studies she’s seen to date show that sharing the information with customers in the restaurant is having a positive effect.

Sampson of the NYSRA remains skeptical though, noting that one reason it’s so difficult to change consumers’ minds is that “they want to do what they want, eat what they like, what makes them feel good, and that’s what they’re going to eat. We only give our customers what they demand. They dictate to the restaurateur what they will provide. And if we don’t give them what they want, they’ll go someplace else to find it. It’s not rocket science.”

Despite his study’s findings, however, Elbel said he believes that many consumers want calorie posting in restaurants.

“I do think some of this matters to them and it is making an effect,” he said. “That in and of itself is a good thing. It may just mean it needs to be coupled with some other interventions and public policies. We know education alone is not enough, but coupled with labels, it could work.”— [email protected]