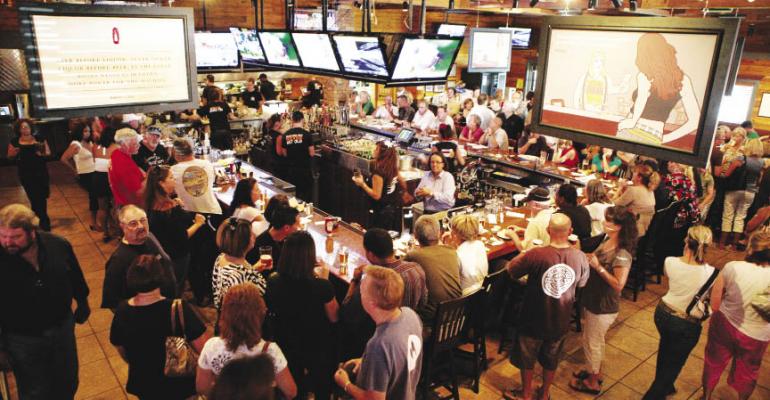 For casual-dining restaurants, extending operations into the wee small hours of the morning is becoming as standard as a Frank Sinatra song.

A growing number of casual-dining concepts are staying open past the typical 10 p.m. or 11 p.m. close, often keeping the doors and kitchen open until midnight or even 2 a.m.

Many Applebee’s Neighborhood Grill & Bars expanded their hours last year, and Red Robin Gourmet Burgers Inc. has added late-night happy hours over the past few months. Smokey Bones Bar & Fire Grill enhanced its evening offerings nearly a year and a half ago, and profitable operators like the 100-unit BJ’s Restaurants Inc. of Huntington Beach, Calif., have long offered late-night dining.

Officials with Applebee’s parent DineEquity Inc. earlier this month told analysts that about 80 percent of the casual-dining chain’s 2,000 locations are open until midnight or later, helping the late-night daypart account for 13 percent of sales in 2010. The late-night hours helped to boost higher-margin alcohol sales, officials said, noting that for the fourth quarter ended Dec. 31, 2010, alcohol accounted for 14 percent of the sales mix — the highest in Applebee’s history and an increase of 2 percentage points since late-night hours began earlier in 2010.

Expanding late-night hours is one way the beleaguered casual-dining segment can gain some momentum as it tries to recover from the recession, according to Chris Tripoli, founder of the A’La Carte Foodservice Consulting Group in Houston. The segment was particularly hard hit as consumers traded down to less expensive quick-service and fast-casual options.

“What these operators are trying to do is spread the dayparts to help recover sales from periods that have gotten extremely competitive,” Tripoli said.

“Sales in the fast-casual segment have grown,” he added, “and upper casual is very competitive, so the Applebee’s and Ruby Tuesdays have had some difficult times maintaining and increasing customer counts during traditional lunch and dinner hours. The expanded evening has the possibility of helping recover some of the lost volume.”

Gregory Flynn, chairman and chief executive of Apple American Group LLC, Applebee’s largest franchisee, said recently that “our late-night initiative has been really very effective. It is centered on driving traffic from 9 p.m. to close. All Applebee’s are staying open to midnight or later now. We’ve revamped some of our happy-hour offerings, and we’ve introduced a higher level of activity, with louder music and lower lights. Really refocusing on being a bar.”

Casual-dining restaurants, especially those in suburban areas, are well located to appeal to a cautious, post-recession consumer who wants to have fun, Tripoli added.

“Coming out of the recession, there seems to be an eagerness for the casual-dining segment,” he said. “But these customers are not going to dramatically change their habits. They aren’t going to drive into downtown or go to a nightclub. But they do seem to want to extend their existing buying habits.”

Tripoli expects some of that money to go toward entertainment as consumers seek to shake their recession blues. That makes expanded late-night hours a logical strategy for casual-dining operators.

“The whole ‘eatertainment’ thing is coming back,” he said. “It’s back with a slightly older customer that wants quality cocktails and food.”

The move by some casual dinnerhouses to expand late-night hours mirrors relatively low-cost efforts by other segments to grow their dayparts, Tripoli said, pointing to the proliferation of snack products by fast feeders.

“Look how brilliantly McDonald’s did it with the small-portion snack wraps,” he said. “They did not spend millions to develop and promote those items for lunch or dinner. They did it to expand their daypart, and they did it successfully. Casual-dining chains saw that it has worked in other market segments.”

Casual-dining operators also are taking a cue from competitors that are already profiting from later hours, said Tripoli, citing so-called “breastaurants” Hooters of Atlanta and Twin Peaks of Addison, Texas, and sports-oriented operators like Minneapolis-based Buffalo Wild Wings, all of which keep their doors open later than more traditional casual-dining operations.

Late-night hours and alcoholic beverages often go hand in hand, moving the casual-dining segment back to the fern bar roots many operators shunned when liability issues and increased awareness of the dangers of drinking and driving forced many to tone down their bar business.

Now, the need to boost sales is swinging the pendulum back. While operators say they are not ignoring families, they are going aggressively after the socializing adult.

Red Robin officials said in a recent conference call that for every 1-percent increase in the alcohol sales mix, the chain would expect to see a $6 million increase in profit.

In the past two months, Red Robin has debuted drink and appetizer specials during off-peak dayparts. The chain also launched an early- and late-night happy hour, as well as redesigned menus and point-of-purchase materials to highlight both alcohol and non-alcoholic beverages and promotions.

Smokey Bones, a 68-unit casual-dining chain based in Orlando, Fla., in 2009 saw an opportunity for sales growth in the bar, which in remodeled units had been visually separated from the main dining room and offered higher tables for better socializing. The company decided to keep its remodeled restaurants open later — closing between midnight and 2 a.m., depending on the market — and offer a special menu.

Some operators, such as Boston’s Restaurant & Sports Bar of Irving, Texas, have been in the late-night space for a long time and say they have found it lucrative.

“We recommend staying open until 2 a.m. in most markets,” said Randy Steinbrenner, vice president of sales and marketing at Boston’s. He noted that about 95 percent of the company’s restaurants are open after 1 a.m. Boston’s has 50 units in the United States and Mexico, and Boston’s 350-unit sister chain in Canada always has been open late.

“We do a big delivery service, so we definitely pick up late-night deliveries after other pizza chains close down,” he said. “We usually do that until 1 a.m. Since we’ve become known for being open late and since many of our restaurants are near hotels, we can do in-room delivery service for them or partner with them for late-night guests.”

Among the potential challenges is staffing, Steinbrenner said.

“Even in this tough economy we are in, that can be difficult — especially for the delivery drivers.”

Tripoli reiterated that labor costs are one of the only expenses in extended nighttime hours.

“If you are only staying open a couple of hours later, you have minimal labor,” he said. “Most of your fixed costs are the same. It’s not like insurance, utilities and rent are higher because instead of closing at 11 [p.m.] you are closing at 12 or 1 [a.m.] The fixed costs are minimal. The only thing you have is the variable labor.”

In some areas of the country, Tripoli added, later hours may require the extension of so-called late-hour beverage permits.

“Some rules and regulations may apply, but they vary state to state and region to region,” Tripoli said. “If you pull a license for late service of liquor, your liquor liability insurance might go up slightly. That’s a little hurdle to jump with your insurance and permit. [But] the hurdles are worth clearing because you are successful in entertaining your core customer.”

“There is a group in Austin, Texas, that just opened a couple of months ago, and they opened with a late-night program,” he explained. “Part of their package is an after-dinner program. They have bar bites and smaller portions of snacks that are available after 10 [p.m.] The main kitchen can close, but they stay open until 1 a.m.

“It’s a new niche. It’s a growing niche. I think it will be successful,” he said. “These restaurants are promoting a certain point of difference. Everyone is gnawing at the mainstream lunch and dinner customer, but these folks are saying clearly, ‘We’re in your neighborhood, and we’re open late for you.’”

To appeal to the consumer wanting to spend a little late-night cash, Tripoli suggested a restaurant should offer not only a late-night food menu, but also specialty beers and drinks.

“We’re coming back into recovery times. You’re seeing restaurants offering those specialty drinks as well as craft beers,” he said. “Your bar menu better have a beer list.”

Marketing a late-night menu requires not only advertising, but also word of mouth, Steinbrenner of Boston’s said. Some consultants recommend tapping into location-based social media like Foursquare and other forms of new media such as Twitter and Facebook to get the word out.

“Your staff can also help build up your late-night clientele,” Steinbrenner said. “Boston’s is known as a place where other employees in hospitality can come after their shifts and get a great meal and a drink.”

“My word to the wise is: ideate your plan. You work the plan and stick with it,” he said. “It’s not a quick build. You can do a reverse happy hour, but commit to it and put some marketing effort behind it.”

Steinbrenner noted that this round of late-night hours for casual dining harkens back to the segment’s early years.

“I’ve been in the business 25 years, and staying open to 2 a.m. back then was not the exception to the rule,” he said. “People have managed their business backwards. They’ve said, ‘We don’t have people here, so we’ll close.’

“But if you work at developing this piece of the business, there would be more opportunities to catch people after sporting events, after movies and things like that. People are missing the boat on this daypart.”