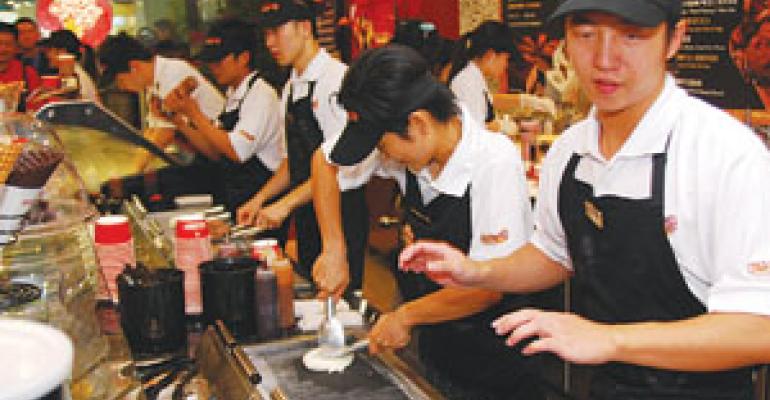 Morning daypart accounts for bulk of traffic in Chinese market

Operators looking to penetrate the fast-growing Chinese market will have to get up early in the morning to do it. Unlike any other country in the world, the morning meal drives the foodservice market in China, according to a new study conducted by The NPD Group.

“[It’s] so different from any other place in the world,” said Bob O’Brien, president of global foodservice development for the Port Washington, N.Y.-based research firm. “[There’s] no country we track…where meals before 9 a.m. are bigger than the lunch or dinner dayparts.”

In December and January, NPD looked into how Chinese consumers use restaurants. A sample of consumers in seven mostly coastal cities, including Beijing, Shanghai, Shenyang, Wuhan, Shenzhen, Tianjin and Chengdu, were surveyed over a two-week period. During the study, nearly every household made at least one purchase of a prepared meal or snack. In contrast, when NPD conducted similar studies in other countries, only about three-quarters of households purchased at least one prepared meal or snack during the two-week period.

Another difference in dining-out habits is apparent at afternoon- and evening-snack periods. While these dayparts have gained traffic in the United States and elsewhere, they barely exist in China. According to the data, less than 3 percent of foodservice traffic occurs between lunch and dinner, and none occurs after 9 p.m.

No matter when they eat, the foods most often purchased by the Chinese to eat away from home are steamed or pan-fried buns and soybean milk. Other top foods include fried-dough products, noodles, clay-oven rolls, boiled dumplings, milk, vegetable dishes, soup, and fried rice with meat or vegetables. Part of why the Chinese purchase foods such as buns at restaurants is because they require a lot of infrastructure to prepare and are not easily made at home, O’Brien said.

Credited as being the first fast-food chain to open in mainland China back in 1987, Louisville, Ky.-based Yum! Brands’ KFC now has more than 2,200 restaurants in 250 cities in mainland China. The chicken chain’s breakfast menu includes an assortment of products similar to Western breakfast items and traditional Chinese items such as congee, or rice porridge, and a fried-dough product.

Oak Brook, Ill.-based McDonald’s, which in 1990 opened the first of its now 900 restaurants in China, began offering breakfast in March 2007. The daypart now represents 6 percent of sales in China, said a spokeswoman. The menu features selected Western items, as well as new, localized additions such as the McPuff, a pocket filled with egg, tomato and peppers.

Looking to grab a piece of the booming breakfast market in China, Canton, Mass.-based Dunkin’ Donuts will launch its first store there in the Shanghai area in late summer. The chain plans to open a total of 100 new units in the next decade.

“We’ve had very significant success in Asia…given that success, we thought the time was right,” said Will Kussell, president and chief brand officer for Dunkin’ Donuts Worldwide.

Dunkin’ plans to serve its core menu of coffee, espresso, teas, frozen beverages and a variety of doughnuts, bagels and baked goods, as well as some customized items to suit local tastes, such as green-tea and honeydew melon doughnuts and mochi rings, or cake-like doughnuts made with rice flour.

Dunkin’s new units will have a variety of footprints, and some, including the first, will have a heavier focus on seating, according to the chain.

“There’s not a lot of home space, so it becomes more of a meeting place,” Kussell said.

Breakfast may be the biggest opportunity in China right now, but if the rate of expansion of Western ice cream, pizza and chicken chains is any indication, it certainly isn’t the only one. While Chinese consumers primarily are using foodservice outlets for breakfast, they also are patronizing chains more at lunch and dinner, largely in groups for special occasions, family outings and business meetings.

“The idea of leisure is still kind of unformed [in China],” O’Brien said. “To make an evening of it at dinner other than a more formal occasion is still a new thing.”

Among the many brands already experiencing growth at lunch and dinner is Louisville, Ky.-based-based Papa John’s. The pizza chain opened its first mainland China store four and a half years ago and now has 100 restaurants in 17 different cities.

“We see not only growth in sales, but in traffic count,” said Myles Felt, Papa John’s vice president of international, Asia and the Middle East.

While stateside Papa John’s is a quick-service pizza chain that does big delivery business, in China the units are 45- to 250-seat, full-service restaurants that also deliver. Dine-in or grab-and-go, the core pizza menu is the same in both countries with only a few additions to appeal to local tastes.

“[A visit to Papa John’s in China] is an occasion or a social event,” Felt said. “It reminds me of when my parents took me to Burger King 30 years ago. It was a special occasion. It wasn’t convenience food.”

Scottsdale, Ariz.-based Cold Stone Creamery, which is owned by Kahala Corp., opened its first unit in mainland China two years ago. It currently has 22 units and plans to open 10 more by year’s end. In China, the upscale ice cream chain’s busiest times are neither lunch nor dinner, but the hours just before the mid-day meal, a typical office break time, and just after the evening meal. Most consumers come in groups of three to four, the chain said.

“We’ve been fortunate…ice cream is pretty universally loved around the world,” said Lee Knowlton, president of Kahala Corp.’s international division. “[The biggest challenge] has been educating…consumers.”

To educate the Chinese about the concept, which features freshly made ice cream, create-your-own flavors and a staff that sings when tipped, Cold Stone has done little advertising and instead relied on such grassroots efforts as product drops; the power of local influencers, such as hotel concierges and news people; and grand-opening promotional events. Though the process has been slow, Knowlton says to date per-store sales in China are nearly double that of the chain’s U.S. stores.