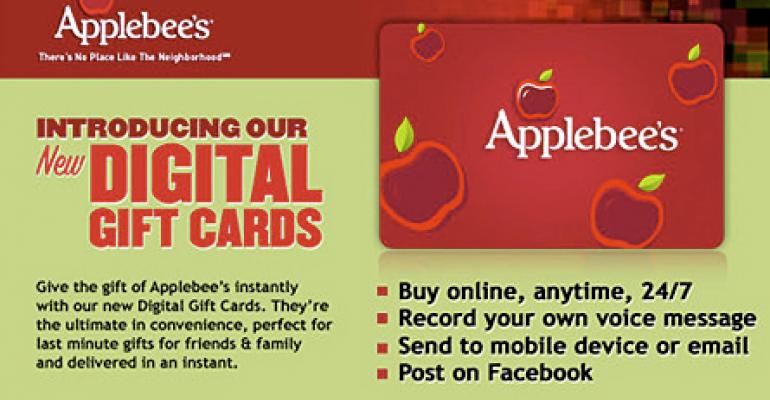 Applebee’s Neighborhood Grill & Bar has joined the virtual gift card game and upped the ante by making the service available from its Facebook fan page, as well as its website.

Several other casual-dining chains, including Chili’s Grill & Bar, Landry’s Restaurants, Ninety-Nine Restaurant & Pub, Ruby Tuesday and Uno Chicago Grill, offer so-called virtual gift cards, which can be purchased online and e-mailed to recipients. Some systems, such as the one used by Applebee’s, support the use of text-message notification to card recipients, though the virtual card itself typically arrives in e-mail.

Applebee’s and the Cold Stone Creamery chain of Scottsdale, Ariz., give buyers the added option of notifying virtual gift recipients via a post on their Facebook wall. While Cold Stone does not offer cash-equivalent gift cards on its Facebook page, it permits people to buy and send to others virtual vouchers for several of the chain’s signature mix-ins, shakes and smoothies, priced from $5.25 to $6.25.

Uno Chicago Grill of Boston proclaimed itself the first U.S. casual-dining chain to offer virtual gift cards in December 2008, when it pitched them to last-minute holiday shoppers.

Lenexa, Kan.-based Applebee’s said buyers may customize the chain’s virtual gift cards with personal photos and messages, including self-recorded audio tracks. Because the service is accessible online at www.applebees.com and www.facebook.com/applebees, it is available around the clock and may be used to order and pay for virtual gift cards that will be scheduled for e-mail delivery at a later date, said Bridget Moen, senior brand manager for gift cards at Applebee's Services Inc., or ASI.

ASI is the division of DineEquity Inc. that operates or franchises about 1,870 Applebee’s locations in the United States and another 230 in other countries and territories.

“Applebee’s gift cards are an easy, innovative and instant way to give family, friends and co-workers more of the food they crave,” ASI president Mike Archer said in a statement.

Most, if not all, virtual gift card programs are supported on the back end by third-party service providers, which charge restaurant companies a percentage of a transaction total up to a maximum amount, a set per-transaction fee, or both. Some providers also charge operators an initial set-up fee.

Typically, the recipient of a virtual gift card prints out a document with an account number, bar code or some other identifier for use at the restaurant.

In some situations, however, such as at the student-run Beans coffee shop at the University of Denver and the ShortStop convenience store group in Boulder, Colo., virtual gift cards codes can be sent to the mobile phones of recipients, who need only show a cashier the identification code for redemption purposes. Mocapay is the virtual card service provider for both of those operations.

Moen said Applebee’s virtual gift cards are part of its goal of providing as many ways as possible for consumers to experience the chain.

Virtual gifting options are seen by many merchants as a way to capture more gift card sales, as they permit last-minute purchases from literally anywhere a buyer can connect to the Internet.

Apart from the instant gratification inherent in virtual gift card transactions and the ability to personalize the message, buyers appreciate that there are no postage or shipping charges and, often, no handling fees. Those charges may still apply when ordering plastic gift cards or paper certificates online or by phone. Applebee’s, for example, charges $1.95 to $4.95 for handling conventional card orders, depending on the type of card – custom or standard – and shipping preference.