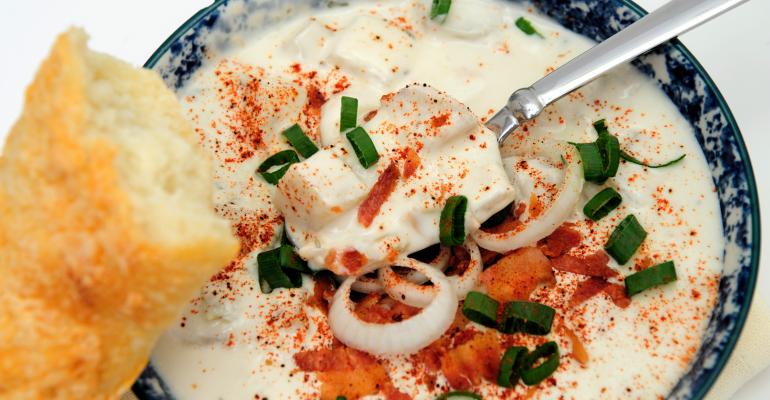 Seafood soup offerings are becoming more widespread, according to a recent report from the Foodservice Research Institute.

Surveying its MenuMine database of 1,490 chain, independent and non-commercial foodservice operators, the institute found that 21.7 percent of the operators currently have a seafood soup or chowder on their menus, up from 17.7 percent in 2005.

Also, more restaurants are calling their soups bisques and gumbos these days. Although 58.8 percent of menus with seafood soup call them “chowders,” that number has fallen from 61.4 percent in 2005. “Bisque,” by contrast, has jumped from 15.9 percent to 18.1 percent, and mentions of “gumbo” have gone from 11 percent to 12.7 percent.

“Soup” has become a less popular term, dropping from 10.8 percent of mentions to 9.3 percent.

Use of other words, like cioppino, stew and bouillabaisse, has gone from 0.9 percent to 1.1 percent.

Menus’ use of more eclectic words such as crawfish, turtle, cioppino, salmon and conch have dropped from 4.7 percent of menu mentions in 2005 to 2.7 percent this year.