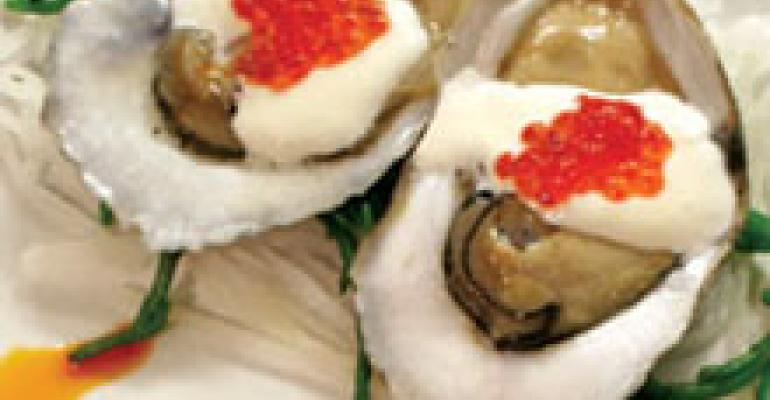 Afairly mild early winter and improved farming techniques have been a boon to oysters this year, particularly on the East Coast, where chefs are enjoying the good quality and low prices of the mollusks.

“They’re very good now, and the price has dropped a bit, too,” says Boston chef Ken Oringer, who serves them on the half shell with red ginger, ponzu, sea urchin and caviar for $4 apiece at Uni, the raw bar attached to his flagship restaurant Clio.

At Clio he shucks them and sears them on a plancha, “so they caramelize in their own salt.”

He makes a sauce using liquid silver, a compound actually made from silver that has a slight metallic flavor, which Oringer says accentuates the metallic nuances of the local Massachusetts oysters.

He mixes that with unfiltered saké, the oyster liquor and dashi. He plates the oysters with the sauce, a type of seaweed called sea grapes and a crispy brunoise of potatoes and chicharrones. He charges $17 for three large oysters.

“They are very good this year,” says chef Lou Lambert, who operates restaurants in Austin and Fort Worth, Texas. Lambert grew up in Port Arthur, Texas, on the Louisiana border, and was raised on seafood from the Gulf of Mexico, and he uses gulf oysters at his Lamberts Downtown BBQ in Austin and at Lambert’s Steak, Seafood and Whiskey in Fort Worth.

Lambert says he occasionally will serve the best-quality East Coast oysters raw on the half shell, but mostly he broils the gulf variety in preparations that are variations on oysters Rockefeller.

“Gulf oysters grow faster, and the perfect oyster for cooking is a big, plump gulf oyster,” Lambert says, especially at this time of year.

Oysters lose some of their meat when they breed, in the summer, he explains.

Seafood suppliers say West Coast oysters are consistent in price and quality compared to recent years despite some heavy rains that have caused brief closures in some areas, such as Washington’s Little Skookum Inlet.

Over the holidays he topped them with a sweet-potato cream. He has also dressed them in Romesco sauce.

He also sometimes makes what he calls “barbecued oysters.” For that dish he shucks them and puts the empty shells on wood-burning grills until they’re piping hot. Then he puts a compound butter with shallots and smoked bacon into the hot shells.

He drops the raw oysters into the sizzling butter and tops them with a tangy vinegar barbecue sauce before finishing them in the broiler. He presents them in rock salt on platters, and serves them with grilled bread and garlic butter.

Michael Gottlieb, chef of Bateaux in Port Royal, S.C., says the area’s famous May River oysters are much cheaper now than in years past.

“They’re in abundance, and they’re beautiful,” says Gottlieb, whose family owned Gottlieb’s restaurant in nearby Savannah, Ga., until it closed a few years ago. “They taste so good this year, it’s unreal.”

He says May River oysters are small and are good raw, but the Low Country custom is to put them in burlaps sacks that have been soaked in seawater and to roast them on a big steel plate over a roaring fire.

“Then we sit around and eat them with cocktail sauce,” he says.

But in the restaurant, he adds, “we’re a little more upscale.”

One popular preparation is oyster gratin. For that dish he lines a cast-iron skillet with South Carolina golden rice cooked with onion and garlic. He puts about eight shucked oysters on that and broils the dish until the oysters barely begin to cook.

Then he tops them with a compound butter flavored with salt, pepper, Parmesan cheese and a brunoise of roasted red pepper.

He broils them for a couple of minutes, then tops them with Parmesan cheese and breadcrumbs and finishes them in the broiler. The dish is priced at $9.

For special guests, he also does cornmeal-fried oysters. He soaks them in buttermilk, dredges them in a combination of cornmeal, panko breadcrumbs and flour seasoned with salt, pepper and garlic, and deep-fries them.

He serves them back in the shell garnished with crème fraîche and Iranian osetra caviar. He gives them away as a little treat, along with a glass of Champagne.

“If I had to charge for it, I couldn’t justify the cost on the menu,” he says, because of the caviar’s price.

At Lantern restaurant in Chapel Hill, N.C., chef-owner Andrea Reusing sometimes serves raw local oysters on the half shell as a special, topping them with crème fraîche and trout roe.

Chip Ulbrich, chef at South City Kitchen’s midtown Atlanta location, fries oysters, too. He likes to use sturdy gulf oysters, which have thicker shells that are less likely to crack when shucking.

He dips them in buttermilk and then seasoned flour and fries them until crispy, serving them on a bed of wilted spinach with crispy lardons and a creamy tarragon dressing. During last year’s Low Country festival, he baked them similar to the classic Rockefeller style, but with mustard greens instead of spinach or watercress.

Arnold Kruck, chef of the Park Avenue Club in Florham Park, N.J., says oysters in nearby Delaware Bay also are great this year. Fairly mild winter weather last month meant that the ones he’s getting from Cape May, N.J., are very clean, not muddy.

He serves them at the raw bar with a mignonette sauce, but he also experiments with different granités. A recent one was made with mustard, dill and vodka. Another had pickled red onion and scallion, and he is experimenting right now with a stout granité because that style of beer goes well with oysters.

He also serves oyster shooters, with cocktail forks so club members don’t feel like they have to toss them back, and baked oysters, as well as a potato-crusted oyster, using dehydrated potato instead of breadcrumbs. He serves those with a yuzu aïoli.