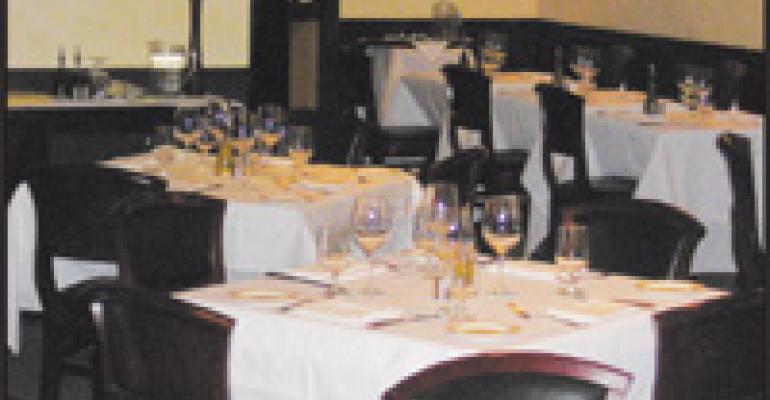 On the Menu: Visconti’s

Even though the Boston bar in “Cheers” was known as the place where everybody knows your name, Visconti’s aims to bring that kind of hospitality to the midtown Manhattan area, judging by the familiarities passed between patrons and management.

Greetings are made by owners Teddy Suric and Giuseppe Viterale, who frequently refer to patrons by name and proceed each salutation with a firm handshake.

“It’s just me and Giuseppe,” Suric says. “There’s no maîtred’, no manager, no hostesses yet, but we’re always here.”

With nearly 50 years of restaurant experience between them, Suric and Viterale are familiar with the midtown-area restaurant scene. They spent time working as waiter-captains at Montebello in 1993 and, more recently, managing restaurants davidburke & donatella and Cellini.

“Opening an Italian restaurant is like opening an American restaurant,” Viterale says. “Italian is basically becoming American cuisine, at least in New York.”

Executive chef Chicco Assante, formerly of New York restaurants Nello and Rosini’s, has developed a menu described as modern Tuscan. For today’s Italian cuisine to succeed, Viterale says, it has to be true to the distinct origin of the food—not just a broad geographic location.

“There is no such difference, north to south,” he says. “If you want to specify yourself, you have to do original cuisine, like from Sicily or Naples.”

Although Suric and Viterale claim that all the items have been performing well, they are quick to point out the tegamata di salsiccia appetizer as a customer favorite. The dish features a hand-made sausage that is pan-fried and topped with wild mushrooms and fresh herbs.

Assante, along with his 11-member kitchen staff, produces all of Visconti’s pasta dishes on the premises. One of the best-sellers currently is the risotto alla Chicco. Named after the executive chef, this plate of risotto is topped with scallops, shrimp, crab and aromatic herbs.

Another signature dish, Suric says, is the orecchiette served with oxtail and red-wine ragù, infused with wild porcini mushrooms. But even with a marquee menu, for an Italian restaurant to succeed its kitchen must be willing to adapt, Viterale says.

“We basically do anything you want,” he says. “Our kitchen is very flexible. If you don’t find it on the menu, we can make it.”

The bar area is a work in progress, the owners say. As for the wine list, Suric and Viterale have invested $100,000 in 140 selections.

“[A restaurant] is only as good as its wine list,” Suric says.

Suric and Viterale are also working to feature an extensive martini list at the 20-seat lounge area, including a signature beverage called the Viscontini. Both owners said the lounge is filled to capacity each day between 5 p.m. and 6 p.m.

The average dinner check at Visconti’s ranges between $60 and $65 including beverages, with nearly 120 nightly covers. Lunches average about 100 covers per day with a $50 to $55 check average.