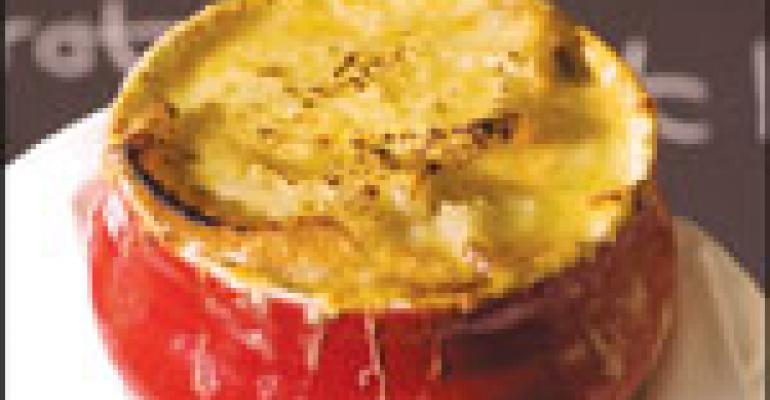 On the Menu: Comme Ça

Some of the words may be written in English, but the menu is thoroughly French at Comme Ça, chef David Myers’ new restaurant in Los Angeles.

Comme Ça seeks to recreate the experience of dining in a classic French brasserie, Myers says. The fare is absolutely traditional, with hors d’oeuvres such as soupe à l’oignon gratinée and escargots persillade preceding classic entrées that include bouillabaisse, coq au vin and beef bourguignon. The restaurant opened for dinner in October, with lunch added in November and breakfast in December.

“It was inspired by my love of brasserie cuisine. It’s what I want to eat,” says Myers, who has cooked with Charlie Trotter and Daniel Boulud, in addition to working in France.

Myers explains that opening Comme Ça was an alternative to his having to hop a plane to Paris or New York every time he got a hankering for authentic brasserie flavors.

Comme Ça comes as a stylistic change from Sona, Myers’ other L.A. restaurant, which is known for its innovative and ever-changing dishes and was recently awarded a Michelin star.

“Sona is totally a personal experience,” Myers says. “It’s all about whatever I want to create that day and whatever is best. It’s just about creation. This restaurant [Comme Ça], I really wanted to have as an experience that would bring back those memories of being in Paris.”

The Comme Ça menu is faithful to its origins—no personal twists to the dishes from Myers.

“I don’t think those classics need to be touched,” he says. “There was a certain beauty in the restraint of not changing them up or modernizing them in any way. It certainly can be done, but that was not my intention with that project.”

At the restaurant’s cheese bar, guests can purchase cheese at retail to take home or sit and enjoy a selection of French and American cheeses, all under the supervision of “Dr. Fromagier,” otherwise known as Todd Jasmin.

Myers says the cheese bar and cheese plates have been extremely popular.

“I think people in L.A., they love to eat this stuff,” he says. “I mean they work out, but then they go have a cigarette and a steak…and a scotch. The cheese bar is rocking.”

What are the best sellers?

In its opening week, Myers says the restaurant has been “chock full”, with some 200 covers per night in the 140-seat space. Desserts come from Boule, Myers’ nearby pâtisserie.

A set rotation of seven Specialités du Jour supplements the regular menu, with roasted chicken for two on Monday, choucroute garni on Wednesday and so forth. In addition, Comme Ça offers nightly specials—rabbit with mustard on a recent evening—depending on market availability. The set menu items are planned as year-round staples.

The menu “can go through all the seasons,” Myers says. “It’s not a seasonal menu like Sona. Sona changes every day. The specials [at Comme Ça] will change; that will be our platform for giving a bit of seasonality to it.”

While the menu is classic, “the ambience is where we put our twist on it,” Myers says. The restaurant includes a speakeasy-style bar, staffed by bartenders who evoke a 1930s mood. Another distinguishing feature is a chalkboard that runs the length of a hallway, adorned with chalk drawings by artist Jini Lyn Keasling along with quotations and recipes.

“We have a very innovative wine list that is exceptionally priced for what we’re doing,” he says. “The goal is we don’t want people to feel they need to bring in their own wine. We have affordable wine from all ranges for people to come in and enjoy. We just want them to be able to relax and have fun.”

In addition to offering premium wines by the glass and the carafe, the restaurant features “New Wine Tuesdays” for guest tasting.

Heading up the kitchen at Comme Ça is executive chef Michael David, a veteran of Michelin-starred restaurants in France and New York’s Daniel, Café Boulud and DB Bistro Moderne. He’s worked with Myers since day one at Sona.

“He’s completely versed in this type of cuisine, and it’s his real love,” Meyers says. “I couldn’t have picked a better person to do it.”

General manager Dominic Ta likewise has been moved over from Sona, “and then I also flanked chef Michael with two sous chefs from Sona as well,” Myers adds.

“So these guys are all getting primed up to be the chefs of the next Comme Ça’s when we do them,” he says.

Myers considers Comme Ça a concept that he wants to replicate. While he says it is not yet decided how many additional units or what other locations are planned, Myers anticipates that 2008 will see an expansion of Comme Ça.