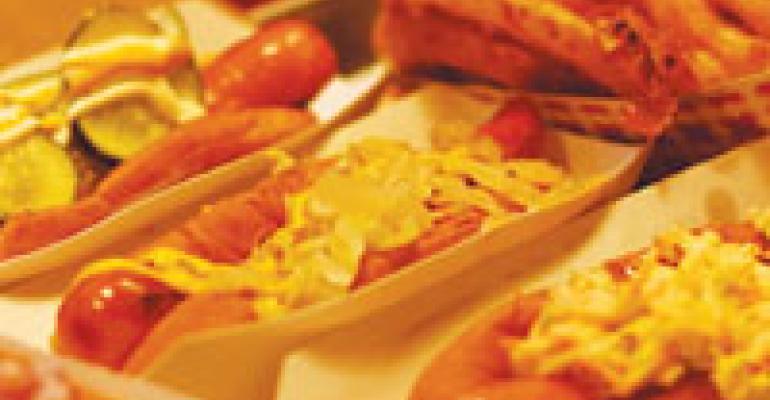 On the Menu: Bark Hot Dogs

Josh Sharkey spent most of his formative culinary years working in fine-dining kitchens, cooking with quality products, so he and partner Brandon Gillis wanted to bring the same kind of ingredients to Bark Hot Dogs, a one-unit fast-casual concept in Brooklyn, N.Y.

And they want to make sure their customers know about it.

“You know, the ultimate goal here is to make fast food transparent,” Sharkey says, “having fast food that you know where your food comes from.”

The co-owners of Bark have a menu that features a variety of hot dogs, plates of fries with chili cheese, gravy and a host of toppings and craft beers. Each table in the 32-seat restaurant also has a cardboard table tent that lists suppliers of meat, dairy products, fruits, vegetables and dry goods.

The menu is printed on recycled paper. It has a section called operational resources that highlights, among other things, where the restaurant recycles its cooking oil and how it gets regional wind power and low-impact hydropower from New York’s municipal power company.

Customer reaction has been positive. Sharkey also thinks pointing out such efforts helps guests get over the sticker shock of 4 bucks a dog.

“We are trying to show you where the meat comes from, how it is handled,” he says, “and it kind of gives them a relationship to what the cost is.”

Because many of the ingredients are expensive, Sharkey says making a profit is a similar challenge as it was at a fine-dining place. “In reality I have the same costs of some restaurants that are doing much higher-end food.”

“I think Americans, in general, associate fast food with something that is very cheap, that is mass-produced,” he says. “If we can get 10 percent of the people that would normally go to McDonald’s to come here, to change their minds, that is a big step.”