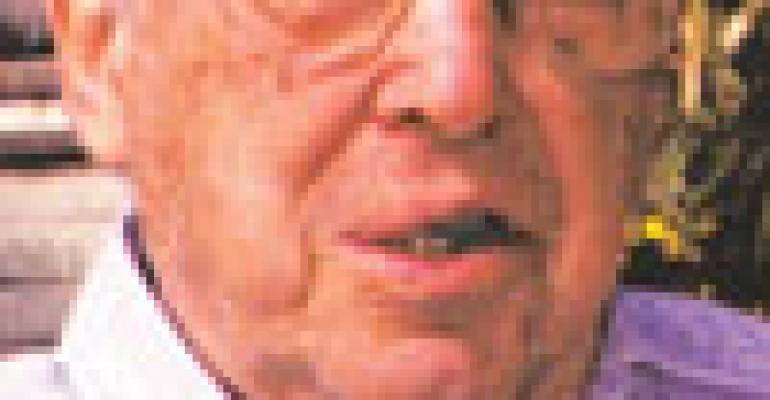 FRANCIS M. “FRANK” BARRETT, creator of the Ground Round casual-dining concept, died Nov. 15 in Brighton, Mass. He was 79.

Barrett’s foodservice career started in the mid-1960s as a management trainee at a Howard Johnson’s in Wollaston Beach, Mass., where he rose to senior vice president.

Barrett launched Ground Round in 1969, a concept that sought to attract families by appealing to parents as much as their children. He left Howard Johnson in 1973 to form a multiconcept company called Barrett Restaurant Group. It grew to 40 restaurants in four states, with such casual-dining concepts as The Charlie Horse and The Abington Ale House and Grille.

BOB BARNEY, a former chairman and chief executive of Wendy’s International Inc., died May 31 in Columbus, Ohio. He was 70.

A franchisee of Kentucky Fried Chicken in Athens, Ohio, and later vice president of KFC, Barney joined Wendy’s founder Dave Thomas in 1969. He became president of the burgeoning hamburger chain two years later. He became chief executive in 1980 and chairman in 1982. He retired in 1989.

Barney was named Operator of the Year by Nation’s Restaurant News at its Multi-Unit Foodservice Operators conference, and received the Gold Plate Award from the International Foodservice Manufacturers Association in 1986.

He is survived by his wife, Anita, six children, seven grandchildren and a sister, Marlene Simmerman.

JOHN BAUGH, the founder of Sysco Corp. in Houston, passed away March 5 at the age of 91.

He launched Sysco 37 years ago. Baugh and his wife, Eula Mae, had started a frozen-food distribution company called Zero Foods in 1946. In 1970, Zero and nine other companies had an initial public offering and formed Sysco, which was an acronym for Systems and Services Company.

Berns spent more than 50 years welcoming international heads of state, entertainment luminaries, the business elite and just about everyone else who came to dine at the “21” Club at 21 West 52nd St.

Berns was active in the New York State Restaurant Association and served on the board of the National Restaurant Association for nine years, during which time he helped to develop the NRA’s Educational Foundation. In addition, he served as a trustee of the Culinary Institute of America. Berns also helped to create Distinguished Restaurants of North America, or DiRoNA, the fine-dining organization that got its start as the Travel-Holiday Awards.

JOSEPH FRANCIS DESMOND, one of the first franchisees of KFC and Wendy’s and a past president of the California Restaurant Association, died Aug. 19 in Fresno, Calif. He was 86.

He is survived by two daughters, a sister, seven grandchildren and three great-grandchildren.

KELLY JO DOWD, who was one of the original Hooters’ Girls when the casual-dining chain first opened in 1983 in Clearwater, Fla., died May 24 in Palm Harbor, Fla., after a five-year battle with breast cancer. She was 42.

Dowd, a former Hooters Swimsuit Calendar cover girl, was also one of the first Hooters Girls to work her way up to general manager. After her diagnosis, she became an advocate for early detection, education and fundraising within Hooters of America Inc., parent company of the more than 430-unit casual-dining chain based in Atlanta.

In August, Hooters donated $250,000 to the Jimmy V Foundation for Cancer Research. The company has established a $2 million grant to the foundation in Dowd’s name.

Dowd is survived by her husband, Mike Dowd, and teenage daughter, Dakoda.

Evans’ career began in 1946 with the opening of a 24-hour, 12-stool truck-stop restaurant in Gallipolis, Ohio, where he served sausages made from hogs he raised on his farm. He formed Bob Evans Farms in 1953, and the company grew to become a maker of packaged foods sold in 40 states and parent of the Bob Evans restaurant brand, which has 579 restaurants in 18 states. Evans retired as president in 1986.

Evans is survived by his wife, Jewell, and five of his six children.

MARCIA S. HARRIS, president and chief executive of the Restaurant Association of Maryland, died Sept. 28 in Columbia, Md. She was 67.

Harris, who joined the organization in 1986, steered it to become the largest membership-based trade association in the Baltimore region with more than 3,000 members, 25 staff workers and an annual budget of more than $3 million.

Business journalist JACK HAYES, who was Nation’s Restaurant News’ Southeast bureau chief for 19 years, died Jan. 26 after an apparent heart attack at his home in suburban Snellville, Ga. He was 60.

Hayes began his 39-year career in journalism with the weekly Verona-Cedar Grove Times in Verona, N.J. He later was associate editor of Handyman, a national do-it-yourself consumer monthly based in New York. He then was Southeast bureau chief for HFD, a New York-based national retailing journal, and a freelance business writer before joining Nation’s Restaurant News in 1988.

Hayes is survived by his companion Kathy Brown; his sons Adam, Aaron and Abe; six grandchildren; a brother, Bill Hayes; and a half-sister, Dorothy Stefanick.

Herbst’s landmark guide, an encyclopedia of cooking terms and ingredients, was published in 1990 and is still in print under the name “The New Food Lover’s Companion.”

Following two revisions by Herbst, the guide’s number of definitions has grown from 3,000 to nearly 6,000 terms related to food and cooking. The book has sold more than a million copies and is the food-term reference book for several websites and magazines, including Nation’s Restaurant News.

Herbst is survived by her husband, Ron; mother, Kay Tyler, and her sister, Tia McCurdy, both of Galveston, Texas.

He is survived by his wife, Debra; mother, Jean; a sister; and a niece.

Foodservice industry veteran DAVID HIXENBAUGH, of Palos Verdes Estates, Calif., was killed in an auto accident in March while escorting his daughter to the University of Arizona.

Hixenbaugh was the former vice president of operations for Sizzler USA, based in Culver City, Calif., until his position was eliminated in January. Hixenbaugh was a regional director for Brinker International’s Romano’s Macaroni Grill brand before joining Sizzler in 2005. Prior to Brinker, he spent seven years in operations with California Pizza Kitchen.

He is survived by his wife, Betsy; his mother, Virginia; his daughter, Brittany; and son, Brandon.

Leading world beer critic MICHAEL JACKSON died of a heart attack in his home in London Aug. 30. He was 65.

Jackson, author of the 1977 book “The World Guide to Beer,” which has been translated into more than 10 languages, is credited with starting a renaissance of interest in beer and breweries worldwide. His TV documentary series, “The Beer Hunter,” which popularized his nickname, was filmed around the world and shown in 15 countries.

His work as a beer critic included writing for newspapers and gastronomic magazines.

He is survived by his partner, Paddy Gunningham; his stepdaughter, Sam Hopkins; his sister, Heather Campbell; and two grandchildren.

Seattle restaurateur GRETCHEN MATHERS died Aug. 7 from cancer. She was 66.

Mathers began her foodservice career after graduating in 1962 from Washington State University with a degree in foods and nutrition. She worked for Stouffer’s Restaurants, at the time one of the country’s larger collection of chains, and rose to a management position at New York City’s famed Top of the Sixes restaurant.

In the 1980s, she ran a successful catering business and cafeteria-style restaurant, Gretchen’s of Course, in Seattle’s Pike Place Market. Her business was later absorbed into Schwartz Bros., a multiconcept operator and caterer based in Bellevue, Wash.

THOMAS J. PARSELL, the co-owner of Magnolias Restaurant, Blossom Cafe and Cypress Lowcountry Grille in Charleston, S.C., died in September in a car accident. He was 63.

Parsell operated several successful automobile dealerships in the Charleston area when he decided to venture into the restaurant business, opening Magnolias in 1991 with his business partner, chef Donald Barickman. The partners managed the three restaurants under the Hospitality Management Group Inc. Both Magnolias and Cypress Lowcountry Grille were inducted into the Distinguished Restaurants of North America.

Parsell is survived by his wife, Suzi.

ALFRED PEET, founder of Peet’s Coffee & Tea and a catalyst for the premium-coffee boom of the past two decades, died at his home in Ashland, Ore., Aug. 29. He was 87.

Peet introduced many residents of Berkeley, Calif., to premium and specialty coffees when he opened the original Peet’s outlet there in 1966.Among the fans of his brews were the founders of Starbucks, who unabashedly studied Peet’s roasting style and coffee selection before launching their brand. They even featured Peet’s coffees early in the concept’s rollout.

When Peet retired in 1983, Peet’s Coffee & Tea, now based in Emeryville, Calif., was a national coffeehouse chain with locations across the country.

VINCENT SARDI JR., who for 50 years operated the landmark Broadway restaurant that bore his family’s name, died June 4 at age 91.

Sardi’s was frequented by Broadway stars throughout the 1950s and 1960s. Their presence drew enough hangers-on and celebrity gawkers to make the restaurant and bar a huge success, with sales topping the $1-million mark by the mid-1950s.

Sardi sold the restaurant in 1985 for a reported $6.2 million. The establishment floundered without him and ultimately closed. Sardi took it over again in 1991, and operated it until his retirement in 1997. His partner, Max Klimavicius, continues to run the business.

MICHAEL EUGENE SCHRADER, the longtime copy editor and cookbook reviewer for Nation’s Restaurant News, was slain at his home in Lauderdale Lakes, Fla., by an acquaintance on New Year’s Day. He was 68.

Schrader, who joined NRN in 1985, retired last year and moved to southern Florida. During his tenure at the magazine, he was charged with creating NRN’s style guide. Schrader also initiated a book review column called “From the Bookshelf.”

He is survived by two nephews, Scott Schrader and F. Dennis Schrader.

MARK W. SNEED, president of Phillips Foods and Seafood Restaurants, died of a heart attack July 16. He was 50.

Sneed rose from his first Phillips post as a director of restaurant training in 1986 to president of both its manufacturing and restaurant divisions in 1998. The Baltimore-based, family-owned company is a seafood supplier and operator of a namesake casual-dining chain in six Eastern cities.

He is survived by his wife, Candace, and three children.

DAVID TALLICHET, the founder of multiconcept operator Specialty Restaurants Corp., in Anaheim, Calif., died Oct. 31 after a battle with cancer. He was 84.

A former World War II pilot who maintained a lifelong fascination with aviation, Tallichet launched his career in the restaurant industry in 1958 with the opening of The Reef in Long Beach, Calif., a waterfront restaurant that remains in the company’s portfolio. Specialty Restaurants now includes 24 restaurants, including such brands as Baby Doe’s, the 100th Bomb Group and Castaway. Most restaurants either have aviation themes or are known for their prime waterfront or hilltop locations.

Tallichet is survived by four children, including John Tallichet, chairman of Specialty Restaurants, and Bill Tallichet, who is general manager of The Reef. He also is survived by his wife, Carol, and four grandchildren.

FREDRICA THODE, who was president and chief executive of the 100-plus-unit Hot Dog on a Stick chain based in Carlsbad, Calif., died Jan. 13 after a long battle with amyotrophic lateral sclerosis, commonly known as Lou Gehrig’s disease. She was 64.

Thode, a 27-year veteran of the chain, was named president in 2001 and chief executive in 2005. She began her career there as a receptionist. Encouraged by founder Dave Barham, she learned about finance, construction and all aspects of the foodservice business and worked her way up the corporate ladder.

She is survived by her husband, Jimmie, two children and three grandchildren.

International foodservice consultant and restaurant operator ANDREW YOUNG died April 4 in an airplane crash. He was 51.

During his 30-year career, Young owned and operated restaurants, including El Teddy’s in New York and Coffee Times, a small chain of New York coffee bars. He also worked for such restaurant companies as Victoria Station; Restaurant Associates, where he was director of restaurant development; and the George Lang Corp., where he was a partner and director of operations.

The Bobby Van’s steakhouse chain today is composed of seven units: the original store in Bridgehampton, four outlets in Manhattan, and two units in Washington, D.C.

He is survived by his former wife, Mariana.