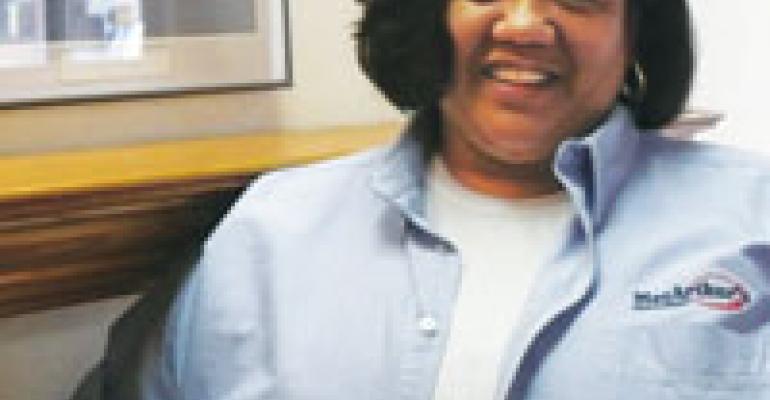 Sharon McKennie never wanted to be a chef. But in 1997, when her Uncle Mac decided to open MacArthur’s, a Southern-style restaurant in Chicago, she abandoned her dream of becoming a nurse and joined the team. Twelve years later, she’s the restaurant’s chef and manager, and she still has no formal culinary training.

McKennie says she aims to make people feel at home in the restaurant. That includes President Barack Obama, who used to be a regular. He would come to MacArthur’s and gather members of the local neighborhood to discuss community improvement opportunities. The restaurant staff would pay him little attention except when he needed to use the copy machine, she says.

“We called him the nerd guy,” she says. “We didn’t know his name. He was just your normal neighborhood guy with blue jeans and gym shoes and a T-shirt. He would come in with his newspaper, get something to eat and just chill.”

Today, tourists looking for a taste of where Obama used to hang out flock to MacArthur’s, and McKennie tells them of the regular neighborhood guy who was “not the kind of guy you’d think would be president.”

Obama isn’t the only celebrity to enjoy McKennie’s soul food. Musicians Kanye West, and R. Kelly, and basketball star Shaquille O’Neal have all been her guests.

And whether it’s a celebrity, a future president or a drug dealer who steps through the doors, she says, everyone is treated like family.

Where did you learn how to cook?

I used to cook at home for years. My mom had six kids, but she was like the family mom of the neighborhood. She was a stay-at-home mom, so all of the kids had to come home from school and wait at our house for their parents. We would end up cooking for a lot of people.

What do you cook at home now?

Usually when I’m away from the restaurant I try not to cook. I try to visit other restaurants just to get an idea of how everything else is going.

Do you have a lot of regular customers at MacArthur’s?

Yes. I know them on a first name basis. You kind of see them and check in [with them]. I’ve learned a lot and I’ve met a lot of people. So to me, it’s not really just about the food. When you make people comfortable, it’ll bring them back.

Never be afraid to try something new.

Why do you keep your prices so low?

Because we’re in a lower-middle class neighborhood, the owner felt it would be wrong to have a restaurant where the people living here couldn’t even eat. So we try to keep our portions moderate and our prices low so that the neighbors can come and sit down and eat.

How often do you change your menu?

Our side dishes change every day. We may add some side dishes just to see how people respond. We used to have just four meats and four sides, but now, on an average day, we have seven to eight meats and eight to ten side dishes. We just rotate them each day, but we always have greens, yams and macaroni.

Has President Obama come back since he was elected?

He hasn’t been here. But he has ordered food. And we respect his schedule. We’re just honored that he would still remember us.

What was his favorite thing to order?

Did you ever make anything special for him?

No, he never asked for anything special. And even when he announced that he would run for president, he was still the same individual. He’s never changed. After he would eat, he would get up and walk around and he would socialize. He would make you feel real comfortable.

Has the restaurant changed any since he was elected?

We get a lot of foreigners that visit us. At one point I think within a three-day time period we had someone from China, Japan, London and Montréal.

Title: chef and manager, MacArthur’s Restaurant, ChicagoBirth date: June 23, 1964Hometown: Chicago.Education: B.A. in Psychology from Northeastern University and B.S. in Nursing from the University of Illinois at ChicagoCareer highlights: running a restaurant business with no previous experience in the field; serving Barack Obama

Do you have a most popular dish?

We’re pretty well known for the macaroni and cheese. When Shaq comes he usually gets two large bowls of macaroni with fried chicken breast. As far as meats, we do a lot of fried chicken, but [also] a lot of smothered pork chops. I’ve always loved fried chicken because it’s something that we were brought up on.

How does your catering business work?

We just cook large portions of any item that we serve. For holidays people may want to cook their turkey and use our stuffing and greens. And we do a lot of Thanksgiving cooking for VIPs. We did R. Kelly’s Thanksgiving dinner. Last year we got to do [former Chicago Bulls player] Scottie Pippen’s dinner, and we got to do [a meal for] Derrek Lee from the Cubs.

Do you have any soul food secrets?

My mom and my aunt used to always say you just have to put the love and the care in what you’re doing. Be health conscious of others. We actually have cut back on some of our seasonings as far as sugar. Over 60 percent of our [staff] have a criminal background, so they’re used to working in a penitentiary or a facility where they feed a lot of people. They help me actually learn how to cook for large groups of people.

When did you start hiring employees with a criminal background?

From day one. I just feel people make mistakes, and if they’re given the opportunity to prove themselves, you can tell from the day you hire them if they really want to change. I’ve always lived on the West Side of Chicago, in this community, and I’ve never smoked a cigarette and I’ve never been to jail. So I think if I can live in the community and do it, others can, too. We work with them because we want to see them do better.