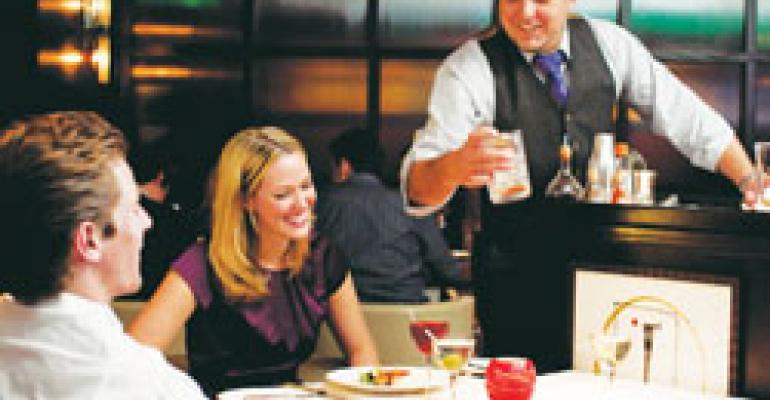 Whether it comes as a result of the enormous popularity of “Mad Men” or the current renaissance of the American cocktail, or perhaps a combination of the two, that quintessential cocktail hour classic, the martini, is back in vogue. By this I do not mean simply anything served in a martini glass, be it pink or blue or caramel-colored, but the simple yet ethereal combination of gin and dry vermouth, with perhaps a dash of bitters added.

In fact, part of the appeal of a martini is its delectable if sometimes frustrating simplicity: delectable because at its best it drinks like a cool rush of morning air; frustrating because sometimes miniscule variations in the proportion of gin to vermouth can spell the difference between great success and abject failure in the glass.

Still, there can be no doubting the resurgence of the martini as a go-to cocktail, evidenced by the renewed rows of cone-shaped glasses now dominating many a back bar and the clever promotions in place at a growing number of operations around the country.

Patrons can choose from premium vodka or gin for their martinis, served straight up or on the rocks, and all this largesse is available for a mere $35. Although obviously riffing on the expense account excesses of the 1970s, Fifty/50 coowner Scott Weiner says that most enthusiasts are curiosity seekers with the day off rather than bluesuited businessmen.

Echoing the fiscally prudent nature of the Fifty/50 offer is the special at Café Adelaide & the Swizzle Stick Bar in New Orleans, where lunch may be accompanied by one, two or three martinis—the maximum—each served at the most modest price of a mere 25 cents. Also available from Monday to Friday, these full-sized beauties are served from 11:30 a.m. to 2 p.m. As a bonus, the bartending team, led by Lu Brow, is recognized as one of the best in the city.

A somewhat different approach to the martini is taken at the Fifth Floor Restaurant in San Francisco’s Hotel Palomar, where during prime cocktail hours lounge patrons may choose not to belly up to the bar, but rather to have the bar come to them.

The focus of the rolling bar cart—think of it as a much more elegant version of the airline liquor trolleys—is definitely the martini, although lounge lizards may also partake of other classics, such as the Manhattan and Sazarac. Seven choices of gin and five dry vermouths are on offer, along with five different types of orange or grapefruit bitters for that old-school, pre-Prohibition taste.

With 175 different martini combinations, not counting versions that make use of a drop or two of varying bitters, it’s an abundance of choice that might make even the esteemed Mr. Draper blush.