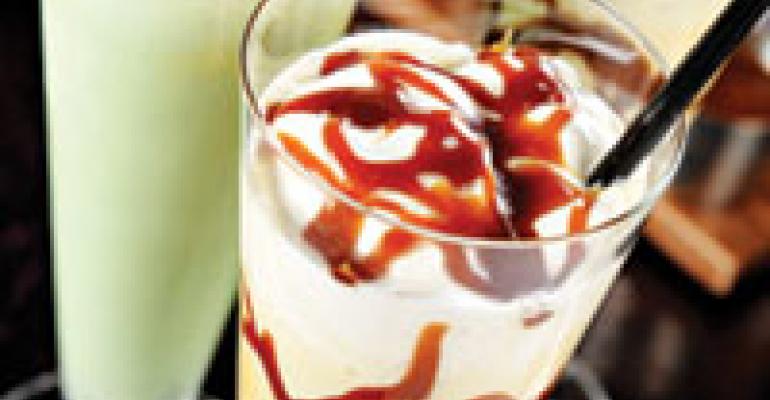 Offering chef-driven flair with a cherry on top, spiked milk shakes are emerging as signature adult beverages at several upscale burger concepts around the country.

Boasting names such as the Bourbon Malted, Grandma’s Treat and the All Nighter, these liquor-laced concoctions offer comfort-food appeal with a grown-up twist when paired with their longtime partner, the burger, operators say.

“In the food and beverage realm, it really doesn’t get more comfortable than a burger and a shake,” says John Rothstein, corporate beverage director of Laurent Tourondel’s BLT Restaurants, which has BLT Burger locations in New York City and in the Mirage Hotel & Casino in Las Vegas.

One of the notable choices at BLT Burger is the All Nighter, made with Kahlua, Baileys Irish Cream, espresso and coffee ice cream, Rothstein says. It is priced at $11.

“You’d be hard-pressed to find someone who doesn’t like milk shakes,” says Noah Ellis, beverage director of San Francisco-based Mina Group, which counts among its restaurants chef Michael Mina’s Bourbon Steak, where gourmet burgers are served in the lounge.

Ellis notes that burger concepts were growing even before the recession encouraged consumers to trade down from higher-priced restaurants.

The Bourbon Bar Burgers on the new Bourbon Steak chain’s lounge menu include Prime and American Kobe beef burgers as well as turkey burgers, both priced at $14; lamb and salmon burgers, both priced at $18; and a falafel burger at $12. They can be topped with an array of artisanal cheeses, farmer’s market vegetables and exotic sauces ranging from black-truffle aïoli to yogurt raita.

To create companion beverages equal to those elevated patties, Ellis looked in a direction different from his “serious” cocktails.

“I don’t think a Manhattan is something you want with a burger,” he says.

He teamed with corporate pastry chef Lincoln Carson on three dairy-based libations that are less sweet and more refined than the typical milk shake.

“We wanted something you could sip with a burger and fries and be satisfied, but not overwhelmed,” Ellis says.

Each shake has a base of three scoops of Tahitian vanilla ice cream, whole milk, and half and half. The milk shakes are spun in a spindle-style mixer and served in frozen footed pilsner glasses. Ellis estimates that the restaurants sell about one adult shake for every four burgers, amounting to a nice bit of additional income at $11 apiece.

The Bourbon Malted’s distinctive brown streaks are made by a few random squirts of salty caramel sauce on the inside of the frozen glass. As it is sipped, the caramel streaks melt and add flavor, Ellis explains. A similar salty-sweet nuance shines in 25 Degrees’ top-selling Salty Caramel shake, a blend of vanilla ice cream, bourbon, butterscotch and Hawaiian red sea salt, priced at $8.

“The touch of salt in the caramel really makes it taste great,” says Tim Goodell, who has 25 Degrees locations in Los Angeles at the Hollywood Roosevelt Hotel as well as in Huntington Beach, Calif., and Phoenix. On average, each unit uses seven to eight gallons of ice cream for shakes each day.

At BLT Burger, Rothstein says he sees spiked shakes as a continuation of the experimental mixology that is revitalizing classic cocktails like the Sidecar, Manhattan and French 75.

“We’re giving the classic milk shake a distinctive twist, yet keeping the alcohol subtle enough so that you still enjoy it as a milk shake,” he says.

In addition to the aforementioned All Nighter, another BLT Burger crowd pleaser is Grandma’s Treat, made with vanilla ice cream, Maker’s Mark bourbon and caramel, priced at $11.

The New York location sells 50 to 60 spiked shakes each week, Rothstein says, while the Las Vegas outpost cranks out around 45 per day to its visitors.

Also popular is the B-52, inspired by the shooter of the same name and made with Kahlua, Baileys Irish Cream and Grand Marnier, plus vanilla ice cream.

“One of the nice things about the Midwest is that people are open to trying things like these,” said Dalzell.