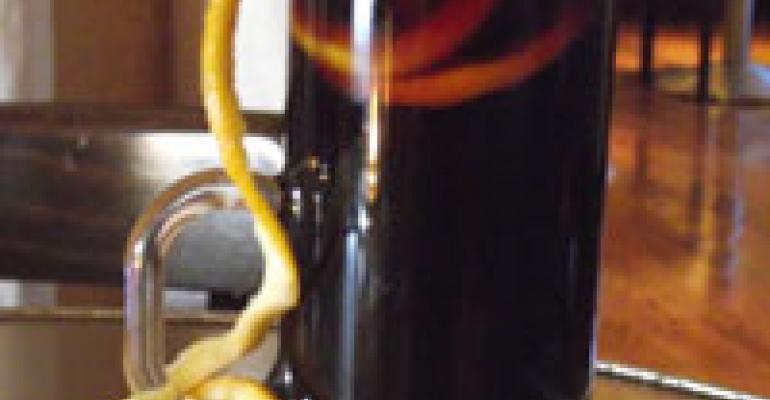 The appeal of spiked coffees is more about familiar, comforting flavors than the flamboyant techniques and exotic ingredients of today’s trendy cocktails. But with a tweak here and a twist there, some operators are refreshing the formulas and service styles of these popular and profitable after-dinner drinks.

Ironically, this comes at a time when packaged caffeine and alcohol combinations have come under regulatory scrutiny. The Food and Drug Administration recently ordered makers of certain caffeinated alcoholic beverages to remove the caffeine from their products amid reports that they were causing consumers, typically college students, to become ill or have blackouts.

In contrast, liquor-laced coffees have a long history as pleasant pick-me-ups and liquid desserts sipped at the table.

After-dinner warmers “strike a nostalgic chord,” said H. Joseph Ehrmann, proprietor of Elixir, a cocktail bar in San Francisco and director of the Boothby Center for the Beverage Arts there. “They tend to be very rich and creamy, sometimes sweet and oftentimes quite boozy. The thing about holiday drinks is that people want warmth and comfort at this time of the year.”

At JCT. Kitchen & Bar in Atlanta, beverage director Lara Creasy keeps the sweet and citrusy Café Brulot warm in a Crock-Pot slow cooker at the bar and sells it for $6 a mug. The drink, an aromatic combination of dark roast coffee, brandy, lemon and orange peels, cloves and cinnamon, is attributed to Antoine’s Restaurant in New Orleans. Although traditionally the brandy is ignited and ladled over the citrus peels in a silver bowl, Creasy handles the flaming more safely and efficiently in a pot in the kitchen. “I just re-ladle it with the orange peels before serving to make sure it has the full orange taste,” said Creasy. The JCT servers have dubbed warm libations like this “crocktails” to the amusement of patrons.

A cup of coffee or latte takes on the unique flavors of Mexican spirits, herbs, spices and chiles at the five Mercadito restaurants in New York, Chicago and Miami. For $7, a guest can spike the brew with a piquete, a shot of equal parts tequila or mezcal and house-made flavored simple syrup. Piquetes come in five variations, including one that combines syrup infused with hoja santa, an aromatic, anise-like Mexican herb, with tequila blanco. Another marries a a syrup of smoky, spicy chile morita with mezcal.

Service is a coordinated effort, with the barista brewing the coffee, the bartender pouring the piquete and the server toting both to the table. “We’re able to execute it very quickly,” said Paul Tanguay, co-founder of the Tippling Bros. beverage consultancy and a partner in Mercadito. “With the diversity of our flavored syrups, it makes for really cool, distinctively flavored coffees.”

At Againn, a gastropub in Washington, D.C., the drink called Café D’Oro, a combination of aged rum, orange liqueur, espresso, drip coffee, cream and brown sugar, priced at $10, gains an earthy nuance from a dash of house-made chicory tincture. The latter is made by infusing chicory root in grain alcohol in a Mason jar at the bar. “It rounds out the drink,” said bartender Jonathan Fellman.

Some operators tweak their customers’ beloved spiked coffees gently, if at all. “There are only so many things you can do with them,” said David Alphonse, vice president of beverage at Back Bay Restaurant Group, a 33-unit multiconcept restaurant company in Boston. “People associate certain brands with hot coffee or chocolate.”

However, Alphonse shows off subtle twists with the Milky Way Café, featured on the dessert menus of Joe’s American Bar & Grill and Papa Razzi, an Italian trattoria, priced at $7.75. It uses Baileys Crème Caramel liqueur, a line extension of Baileys Original Irish Cream and appealing to its fans, Alphonse said, along with chocolate liqueur and vanilla-flavored vodka. The latter adds flavor and depth without the sweetness of a cordial, he said.

Nearly all parties at The Melting Pot end the evening with a chocolate fondue and 30 to 40 percent also order specialty coffee drinks, reported Shane Schaibly, director of food and beverage of the Tampa-based fondue restaurant chain, which has 143 units.

The Melting Pot in Tulsa, Okla., menus 10 specialty coffees, each priced at $7, ranging from traditional Irish Coffee to Café Old Library, the latter laced with Drambuie and Tia Maria and topped with whipped cream and cinnamon.

“In the past few years, I’ve seen more adventurous takes on coffee drinks,” said Schaibly. “People trust their bartenders a lot more, which is cool.”