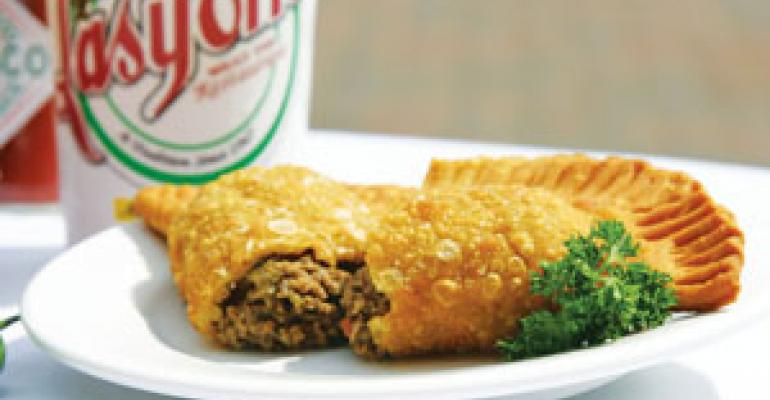 It was 42 years ago that James Lasyone rented the bottom half of a building that had been erected in 1859 and opened Lasyone's Meat Pie Restaurant.

The opening of Lasyone’s partially displaced the current occupant, the Mason’s Phoenix Lodge No. 38, which instead moved to the second floor and continued to meet despite the new tenant downstairs.

The opening also had larger ramifications. It put tiny Natchitoches, La., on the map and spurred a cottage industry built around its meat pie signature dish.

“People just go bonkers over it,” said Angela Lasyone, who owns the restaurant together with sister Tina Lasyone-Smith and their father. “It’s not like most other meat pies. Ours is shaped like an empanada but bigger, and our handmade dough is different, kind of crispy and flakey. It’s not a pie crust, but it’s not like an egg roll wrap or anything like that, either. It’s our own thing.”

The recipe, a closely guarded family secret, has been rhapsodized in such high-visibility publications as The New Yorker, Glamour and the now-defunct Gourmet. The 4-ounce pie contains 2 ounces of meat, and sells for $3.50. The restaurant serves more than 400 daily. An appetizer-sized version, priced at $12 per dozen, soon will be marketed to other restaurants.

Longtime Cajun-Creole menu favorites include a crawfish pie, $5.50; a Red Beans, Rice and Sausage dish, $6.75; a Fried Catfish Platter, $9.50; Homemade Chicken and Sausage Gumbo, $6.25; and on Thursdays Homemade Chicken and Dumplings for $6.50. The only change over the years, a concession to trends, has been the addition of some salads and sandwiches.

“I friggin’ love their meat pies,” declared Max Tucker, the manager of Tattoo Paradise on South Drive in Natchitoches. “I’m not originally from Natchitoches, and the first time I ever had one was in Lasyone’s. It’s one of the few places in town that makes them handmade.”

The restaurant clearly holds a special place in the hearts of locals, and for good reason. The sisters were born and raised in town, and most of their 14 employees have been there long enough to know the locals by name. “The atmosphere is great,” Tucker said. “You go in there and it’s like you’re part of something that is all Natchitoches. All they’ve got are Creoles working in there, so you get a good feel for backstreet Natchitoches. I can also sit by myself and nobody bothers me. I’m tattooed, I’ve got a big ring in my nose, and I still get good treatment when I go in there. It’s nice.”

Courtney Hornsby,director of programming and promotions for the city of Natchitoches, pointed out that “the original meat pie was Lasyone’s but Natchitoches has become well known for them in general.” Indeed, competitors have cropped up, and the town has become home to an annual September Meat Pie Festival, which features meat-pie making, eating and cooking contests. Several years ago, the state legislature even designated the town as “the Official Meat Pie Capital Of Louisiana.”

Lasyone’s “is a landmark,” declared David Stamey, a real estate agent in town. “When I’m touring people coming to Natchitoches as I do, and we’re looking for houses and I’m making my run through the historic district, it’s always the place I point out.” Louisiana’s only other historic district, he is quick to note, is New Orleans’ French Quarter.

A telling anecdote: “The brick-looking tile floor in our dining room, pardon my French, looks like it had been to hell and back,” Lasyone said. “In fact, where one of the waitresses — she’s been with us for 38 years — stands in front of her counter there is a big worn spot. Every time we’d talk about closing down for three or four days to have the floors replaced we’d mention it to these tourists, and they’d say, ‘Oh no, that’s part of the ambiance of the place.’ So we still haven’t changed the floor. Every time we talk about changing it everybody tells us to leave it.”

The sisters have been working on getting their meat pie mass produced, but so far haven’t found it easy going. “We’ve run into all kinds of barricades,” Lasyone said. “I’ll tell you, this whole start-up process for getting them mass produced is really complicated. Every [manufacturer] can do the meat; it’s having that dough capability.”

Finding a business partner of some sort is essential, she emphasizes, since she and her sister represent “the end of the line. Neither one of us has any children. When we’re dead and gone, it would be theirs.”