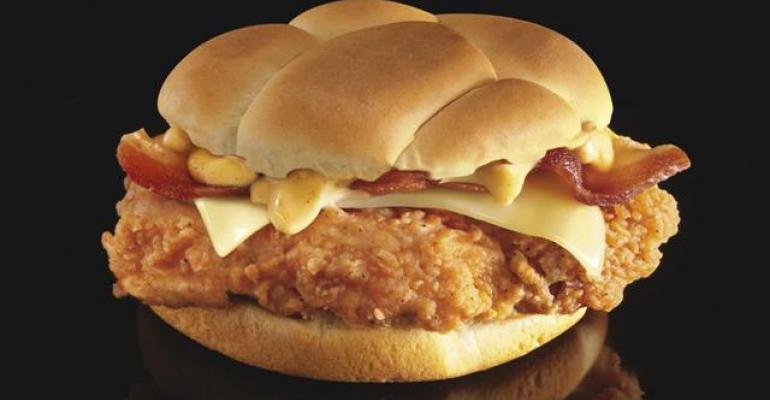 KFC’s Double Down gets a bun

KFC is set to debut next week a new version of its most successful limited-time offer, the Double Down, and this time the “sandwich” actually gets a bun.

The Doublicious, which Louisville-based KFC promoted to members of its e-mail club last week, will debut July 5, and the company already is calling it the chain’s signature sandwich.

The new sandwich targets fans of the Double Down, as KFC’s e-mail promotion remarked, “If you thought our sandwich without the bun was a hit, wait until you see what we’re doing with a bun!”

The Double Down was an instant hit, selling nearly 10 million and garnering a tremendous amount of consumer and industry attention. KFC expects the same from the Doublicious.

“The great thing about the Double Down — aside from the obvious fact that KFC has sold more than 10 million of them — is that it really got people talking about KFC and sandwiches, and that is continuing,” KFC spokesman Rick Maynard said Monday in an e-mail to Nation’s Restaurant News. “The Doublicious isn’t even in our restaurants yet, and there is already a tremendous amount of chatter about it.”

He also confirmed that the Doublicious was tested in the Providence, R.I., and Omaha and Lincoln, Neb., markets, as was the Double Down before its April introduction.

Among consumer and media chatter about the Doublicious are comments from authors and readers of blogs like Consumerist implying that the new sandwich lacks the innovative punch of the Double Down. KFC refuted the notion that a bun makes its newest product just another chicken sandwich.

“The bottom line is that America is talking about KFC and our sandwiches, and that is a very good thing,” Maynard said. “Once [Americans] get a chance to try the Doublicious, we think they’ll agree that it is as good or better than any chicken sandwich in the fast-food business.”

KFC, a division of Louisville-based Yum! Brands Inc., has more than 15,000 restaurants worldwide, including more than 5,100 units in the United States.