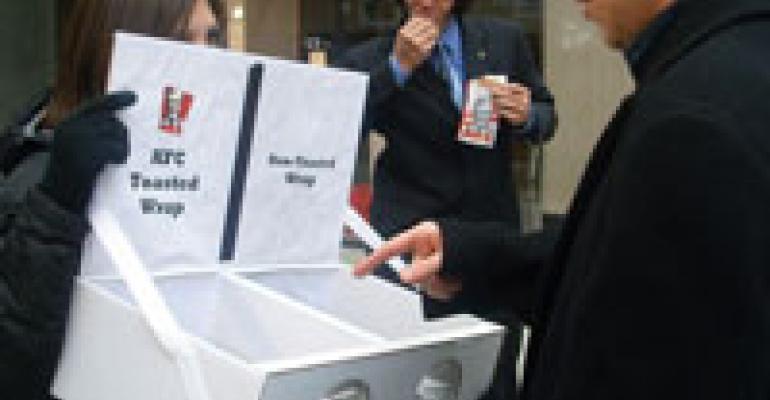 KFC’s new product is a flour tortilla containing a crispy, all-white meat chicken strip, lettuce, pepper mayonnaise and a three-cheese blend. Like McDonald’s Snack Wrap, which the burger chain has cited as an important factor for its financial success, the new Toasted Wrap is priced at $1.29. Unlike McDonald’s version, the KFC wrap is toasted on a grill press before serving. In regional taste tests, which did not identify the brands, consumers preferred KFC’s wrap to McDonald’s Snack Wrap with ranch dressing, according to KFC.

To promote the wrap, KFC has launched “touch tests” in Chicago, Miami and Columbus, Ohio, which ask consumers to touch toasted and untoasted wraps and state their preference based on touch alone. The toasting process gives the wraps a firmer consistency, KFC said.

Visitors to KFC’s website also can take the test and enter a sweepstakes to win a trip to the Bahamas.

Anew TV campaign, created by DraftFCB of Chicago, also is supporting the launch and introduces the new tag, “Life Tastes Better With KFC.”

The chain, a division of Yum! Brands Inc., has more than 14,000 units worldwide.