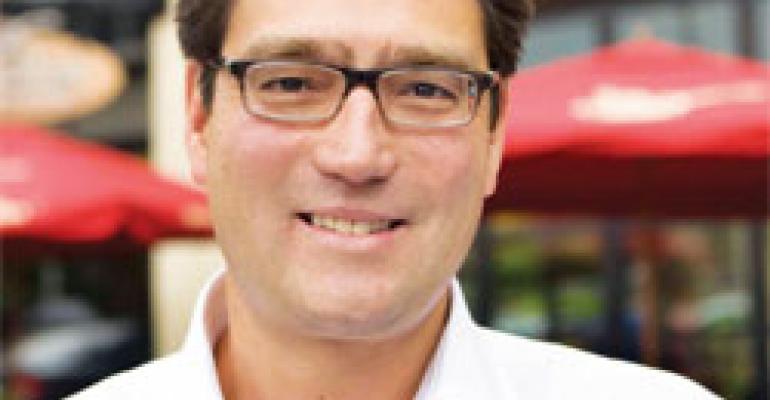 Look at Noodles & Company’s balance sheet and you might wonder in what recession-proof universe the chain operates.

Since Kevin Reddy was named chief executive in May 2006, the Broomfield, Colo.-based chain has enjoyed annual double-digit unit growth, with positive same-store sales growth every year and in 19 out of the past 20 quarters.

Since he joined the company, the chain has grown from 100 units to more than 245, and annual unit growth is shaping up between 15 percent and 18 percent for 2010, Reddy said.

Noodles & Company’s chief executive got his start in foodservice asking, “Would you like fries with that?” for a McDonald’s franchisee in his hometown of Pittsburgh.

After earning a bachelor of science degree in accounting from Duquesne University in Pittsburgh, he went to work for Ernst & Whinney, now Ernst & Young.
Soon after that, Reddy joined McDonald’s Corp. in a finance role as a regional comptroller.

Reddy soon realized that he didn’t find accounting to be particularly inspiring and moved over to operations. He started in the Washington, D.C., area as a field service manager, working with franchisees.

He later became a national director and then worked in operations in the Asia Pacific region.

Reddy returned to the United States, where he was running operations in the Raleigh, N.C., region when McDonald’s bought a minority share in a 13-unit burrito chain based in Denver with a hard-to-pronounce name but a lot of potential for growth — Chipotle Mexican Grill.

Reddy became a sort of liaison between McDonald’s corporate and Chipotle’s founder Steve Ells. Over time the burger giant became the burrito chain’s majority shareholder and then spun it off. By that time, Chipotle had been established as one of the country’s largest fast-casual chains.

Reddy said his job at the time was to “shepherd the relationship between [McDonald’s and Chipotle] and help put the infrastructure in place to make Chipotle scalable. And also to provide some integration and support.”

It worked for Reddy, too, who by then had moved to Colorado and become an expert in developing fast-casual restaurants.

“Lots of single-unit competitors have attempted the multiethnic noodle concept to varying degrees of success, but I haven’t seen another chain attempt it,” Imbergamo said of Noodles & Company.

Robust and diverse as the Denver fast-casual restaurant scene was, it was nonetheless inevitable that Reddy eventually would meet Noodles & Company’s chief executive, Aaron Kennedy.

A former brand manger for Pepsi, Kennedy founded Noodles & Company in 1995 to serve pasta dishes from around the world in a fast-casual setting — even though it wasn’t called fast casual yet.

“What I think has been most successful for Noodles, especially here in the Colorado market, is that each menu item is made to order and can be customized in terms of nutrition,” said Amanda Faison, food editor of 5280, a city magazine in Denver.

“It’s not unusual to overhear the customers ordering their Japanese pan noodles with half the oil or asking about their Chinese chop salad sans won tons and with the dressing on the side,” she added.

The business had grown from one unit in Denver’s Cherry Creek North neighborhood to a 100-unit chain when Kennedy brought Reddy on board.

He joined the company as president in April 2005, became chief executive in May 2006 and chairman two years after that.

“Hiring Reddy and others seems like a natural progression” for the company, Imbergamo said, “from entrepreneurial founder to professional managers.”

At the time, Kennedy had initiated a plan to franchise more restaurants, and when NRN interviewed Noodles executives in late 2004, chief financial officer Mary Beth Lewis said deals had been made to open another 155 stores, mostly franchised, in the coming years.

But Reddy put what he called “a strategic pause” on growth to evaluate the brand.

He streamlined the menu, removing some items and reorganizing the rest.

Reddy re-sorted the menu based on the dishes’ geographic origins and lowered prices. He also added a smaller-size option for each item and made every similarly sized item the same price.

“We wanted to focus on improving the guest’s experience,” he said. By making every item the same price, he reasoned, guests could order whatever they felt like without worrying about the pricing difference.

“We had a slight average-check dip at first,” Reddy said, “which we anticipated and forecast. But then we had some of the strongest guest count increases in the business.

“And we found that the average check rebounded quickly.”
That rebound was aided by the addition of desserts and appetizers and the introduction of combo meals. Those meals feature a smaller portion of noodles with whatever protein a guest chooses, plus a side soup or salad.

“For a little bit more money, they really have a nice balanced meal,” Reddy said.

The franchising initiative was scaled back, and currently only about 20 percent of the chain’s restaurants are franchised.

“We’ve concentrated heavily on corporate growth in recent years,” Reddy said. “Our margins are high enough that we can do that.”

He added, however, that the franchisees they have “have done a really good job improving results in the areas where they operate.”

Reddy indicated that as the economy strengthens and financing becomes more readily available, Noodles & Company might move toward more franchising.