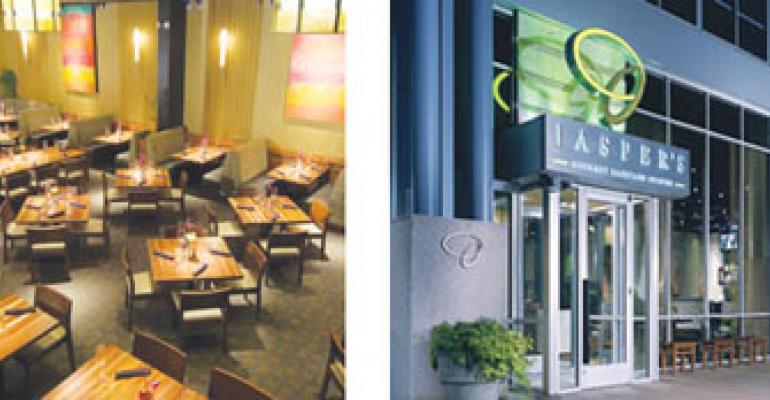 Jasper’s Restaurant, the upper-end casual-dining sibling to chef Kent Rathbun’s upscale Abacus in Dallas, is building a unit in San Antonio, taking its “gourmet backyard cuisine” to a fourth Texas market since debuting the concept five years ago.

Launched in Plano, Texas, in 2003, Jasper’s features a scratch kitchen that specializes in homemade salads and desserts, wood-grilled pizza, steaks, and seafood. Jasper’s opened in The Woodlands north of Houston in 2005, and the third outpost was introduced in Austin last year.

“Jasper’s menu reflects high-end items in an atmosphere of casual elegance,” Rathbun says. “Our service, style and decor all work together to deliver a five-star meal at affordable prices, allowing for our guests to enjoy an unsurpassed culinary experience.” The check average at Jasper’s runs about $45 per person, and the average unit volume is about $5.5 million. The units range from 9,000 square feet to 9,200 square feet in size.

Food of this quality can be called “backyard cuisine” only if its creator already is a celebrated chef like Rathbun, whose Abacus was a Nation’s Restaurant News Fine-Dining Hall of Fame winner in 2005.

“The inspiration came from my childhood memories,” Rathbun says. “The majority of recipes are from either my parents or grandparents, and I wanted to recreate those memories for all to enjoy in an upscale atmosphere.”

When The Woodlands store opened, Allison Cook, restaurant critic for the Houston Chronicle, said the concept “is whip-smart for an upscale suburban Texas milieu.”

“‘Gourmet backyard cuisine’ may sound too cute,” Cook says, “but Jasper’s playfully combines aspects of a posh steakhouse, a buffed-up barbecue joint and a glorified plate-lunch cafe in a way that speaks to Texas palates.”

As backyards go, few have such inspirations as a noted American artist.

Rathbun says his more laid-back restaurant fits into the way Americans are dining, even in a tough economy.

“Jasper’s is a nonstuffy approach to fine food, an affordable restaurant for those who enjoy and appreciate chef-driven concepts,” he says.

Jenny Taylor, activities coordinator at the 34-acre Market Street lifestyle-mixed-use shopping center located north of Houston, says Jasper’s is “one of the favorites not only at Market Street but in The Woodlands.”

The patio plays an important role at Jasper’s, tying in not only the “backyard” positioning but also taking advantage of the Sun Belt’s temperate evenings in spring, summer and fall. Rathbun says ample space for patios will be an important component of future Jasper’s units.

While originally positioned as an upper-end casual-dining restaurant, the Jasper’s outside of Houston and in Austin are more upscale.

“It’s definitely one of the finer dining choices here,” Taylor says. “They have a unique focus that is very urban-inspired, and the decor is very ‘naturesque’ inside. That allows for the feeling of dining outside when you’re inside.”

Rathbun says he’s proud of the atmosphere his team was able to create.

“The design, including the kitchen as each focal point, was also very important to me when developing Jasper’s,” he says. “I wanted to make sure the design was modern, yet comfortable, and the artistic interpretations of natural elements into the overall design scheme exemplify the gourmet backyard cuisine concept.”

Critics have fallen for the design.

“The contemporary setting is gorgeous,” Cook says of The Woodlands restaurant. “Stone, glass, metal and wood mesh in a moody palette that is as sexy as industrial design gets. The room, which is subdivided by an open fireplace and glass partitions showcasing grasses in silhouette, strikes just the right note of high-style informality. Men will find it manly. Women will find it sleek.”

The bar also gets high marks.

“And who could resist the glamorous outdoor lounge, its long, high table lined with flickery hurricane lamps?” Cook asks. “Young Hollywood would eat this setting with a spoon. The Woodlands’ young residents—its middle-aged residents, too, for that matter—keep it hopping way past the traditional suburban witching hour of 9 p.m.”

Jasper’s also was designed to meet the needs of business guests, providing areas that are private and equipped with high-speed and wireless Internet access for presentations.

But the food is what keeps the customers coming back, Taylor points out. The menu is unique, she says, noting her favorites are the Asian chicken salad and the steaks and prime rib.

Best sellers on the menu include blue cheese potato chips, proscuitto-wrapped shrimp and grits, pan-seared salmon with grilled asparagus risotto, and Texas peach-barbecued pork tenderloin with bourbon-cream corn. The tenderloin was a dish originally created for the menu at Abacus that migrated to Jasper’s when it first opened in Plano.

Taylor says she also is impressed with the service, which she calls well trained and very helpful.

But Rathbun says his pride lies in the ability to serve a large number of guests and execute the meals at a quality level.

“I am extremely proud of the fact that each of our locations have the ability to serve a huge volume of guests high-end food,” he says.