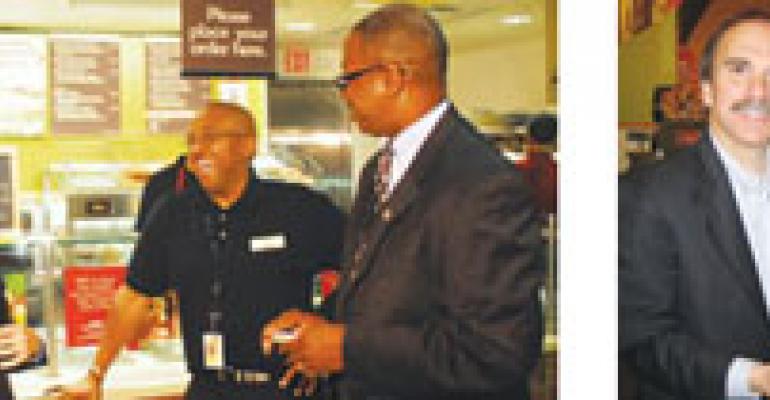 James Greco, chief executive of Bruegger’s Bagels, says he could have wound up in any industry, but a fluke opportunity set him on the path to an 18-year foodservice career.

Initially, Greco followed his father’s footsteps into law. The two practiced together for several years until his father’s retirement, then Greco decided he would prefer to be in business.

“I knew I liked it, and I liked it better than law,” he says. “So I started doing consulting for companies that had business and legal problems.”

He landed a consulting position with a fruit-juice-processing facility in Ellington, Conn., which had been hobbled by bad management decisions and a Florida freeze that had damaged orange crops and sent juice prices skyrocketing. Within a few months, he was named chief operating officer.

“I earned stock as part of my compensation,” Greco says. “We were able to grow the company, and then merge with a competitor, and then eventually sell the business. That was five years later.”

Next he organized a group of investors to acquire an ice cream manufacturer. Six years later, while selling that company, he discovered Burlington, Vt.-based Bruegger’s.

“Bruegger’s founders had hired a firm to help them sell the business, and my friend got me the materials, and I remember reading through them and thinking, ‘What a great opportunity,’” Greco says. “It was a brand that had been suffering a bit in the past couple of years, but I thought it was a diamond in the rough, and that with some new attention it would blossom.”

When Bruegger’s Bagels was founded in 1983, bagels were considered an ethnic food. At the time less than one-third of Americans had ever tasted one. By the 1990s, bagels were ubiquitous, and Bruegger’s and its competitors were growing like wildfire in the race to win market share.

“There wasn’t time or effort put into product development or renovating units,” Greco says. “So there were units that were very old and tired-looking and a menu that was—no pun intended—stale.

“I thought that by addressing those issues—renovating new units, creating new products and putting a lot of effort into marketing—that it would pay dividends. And indeed it has.”

“He started out as an attorney, and to my way of thinking that training has allowed him to stay very focused on the brand and what needs to be done to enhance the brand,” Lombardi says.

Proof of Greco’s success lies in “a great track record of increasing same-store sales over the past five years,” Lombardi adds. “He’s assembled a very good team of people, and I think the brand’s strength continues to increase, not just in consumer awareness, but in unit-level economics.”

Greco says that when turning troubled companies around he prefers to set clear, short-term goals so his team will see where they are going and what progress is being made.

“I find the best thing to do is to initially divide up the strategy into pieces and have short, 90-day or 120-day time periods,” Greco says. “It makes it easier for people to grasp what we are doing.”

While the problems that propel a company into trouble can be different, those problems tend to impact the businesses in the same way, Greco says.

“[Struggling companies] tend to ignore marketing and their facilities because they don’t have the time or money to pay attention to it,” he says. “But that damages relationships with customers.”

So new product innovation and marketing are where he sets his sights when aiming for a turnaround, he says.

“Usually, the solution involves product development, upgraded facilities, marketing and repairing customer relationships,” he says. “It’s also important to build back morale amongst the team members, because it can get pretty bad after several years lacking innovation. It is demoralizing for them. So building back morale is often one of the first things you have to do.”

Since Greco joined Bruegger’s in 2002, the chain has grown to 290 units, the decor has been updated to recall a New England farmhouse, and the menu has expanded to include breads, wraps and sandwiches.

“The marketing message is based on food innovation, and maybe on subtle reminders that Bruegger’s is a place that people like to come back to again and again,” Piper says. “We focus on bringing back favorites, and on emphasizing new innovations, like the sandwiches we’re making on bread that we bake. We keep [the message] extremely simple to try to keep in line with the product itself.”

One of the most successful new-product rollouts has been that of fresh-baked bread.

“About a year ago we said, ‘If we were to do something beyond bagels, what should we do?’” recalls Philip Smith, corporate chef and director of new products and services. “We did some research and were told we should do bread. We thought, ‘Should we bake this bread or buy it, because there’s a lot of good bread out there.’ And they said, ‘Oh no, you’re bakers.’ So we started baking our own bread.”

The new, house-made bread is used for the chain’s sandwiches and paninis, including a breakfast panini made with egg whites, Swiss cheese, peppers, onions and tomato sauce, which has fewer than 350 calories.

“It’s a healthy breakfast,” Smith says. “It doesn’t have the usual ham, sausage and bacon on it, and it has a lot of flavor.”

Smith says part of his job is corralling all the ideas Greco comes up with.

“Greco’s pretty dynamic,” Smith says. “There’s a lot of personal energy, and he throws out ideas in a spitfire fashion. It’s our job to corral them and explore them and see if they make economic and culinary sense for our brand. He’s a great idea generator.”

Piper, who has been with Bruegger’s for two years, agrees.

“He’s a very sharp guy,” he says. “He’s very committed and knowledgeable, and he seems to have an almost encyclopedic knowledge of our industry. He loves competing with the best-in-class in the industry and seeing if we can get our game even just a little bit better.”