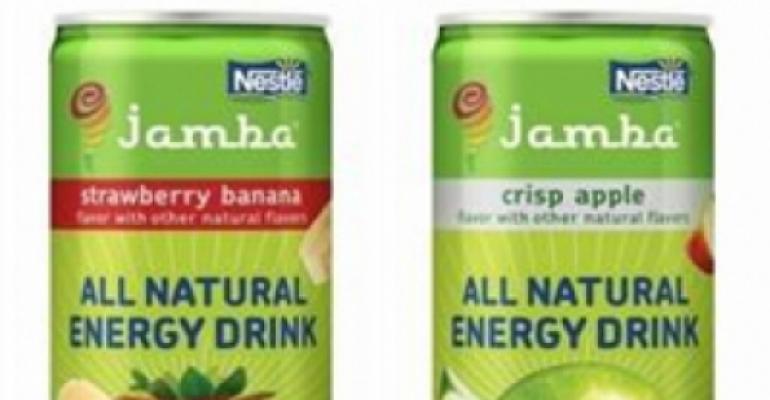 Jamba Juice is splitting with Nestlé USA to take control of a line of branded energy drinks in a move that marks the next phase in the smoothie chain’s plan to become a global billion-dollar consumer products brand.

Emeryville, Calif.-based Jamba Inc. said earlier this month that it has acquired the product formulation and intellectual property for a line of Jamba All-Natural Energy Drinks developed under a licensing agreement with Nestlé. Terms of the deal were not disclosed, but Jamba said it is expected to close by June 20.

The line of bottled drinks, which includes three flavors, was launched last year among retailers in the Northeast. Jamba hopes to expand the line nationally.

James White, Jamba Inc. chief executive, said Wednesday that the move is the first step in a planned shift away from licensing to allow the company more control over the growth of its consumer packaged goods, or CPG, platform.

“We’ve previously used only licensing agreements for our consumer packaged goods products,” he said. “As we enter into the new phase of our approach to CPG, we’ll explore joint venture, co-pack agreements and other sales and distribution arrangements to provide us with increased control of our CPG products and enhanced returns.”

The move is reminiscent of Starbucks’ split with former licensing partner Kraft Foods last year, which allowed the coffeehouse giant to bring its packaged coffee distribution in house. Starbucks followed the breakup with aggressive growth of other CPG product lines, such as the VIA Ready Brew instant coffee, K-Cup packs and Evolution Fresh bottled juices.

For its Jan. 1-ended first quarter, Starbucks reported a 72-percent increase in revenue for its CPG category alone.

For Jamba, the growth of CPG has long been part of the transformation plan for the smoothie chain.

A former Safeway executive, White was recruited by Jamba Inc. as chief executive not only to turn around the Jamba Juice chain, but to also to leverage the brand’s retail potential, he said.

Like Starbucks, Jamba is going after a piece of the estimated $50 billion health-and-wellness category, which includes a wide runway for “on-the-go products,” White said.

“People want better-for-you options wherever they are,” he said. “You’ll see us fine-tune our portfolio of beverages with some new categories.”

The new JambaGo self-service outlets, which the company is testing in schools and other nontraditional locations, also offer an opportunity for more branded to-go products, he said.

Earlier this year, Jamba bought Talbott Teas, a boutique premium tea company based in Chicago. Starting in the fall, Jamba Juice stores will begin offering Talbott tea, both as brewed beverages and packaged products. The teas will also be sold “selectively” elsewhere.

White said the company may continue to have some licensing agreements within its CPG portfolio, but the goal will be to have more control over the platform’s growth, “to grow faster or make it more profitable.”

Over the past year, Jamba has tripled its CPG royalty stream, which is expected to reach about $3 million this year.

Other than the energy drinks, the chain’s branded products include a frozen home-smoothie kit, a line of fruit-infused coconut water beverages in partnership with Pepsi Beverage Company, all-natural fruit cups and a line of Brazilian super-fruit shots.

Within three to five years, however, White predicts Jamba can build its CPG platform into a billion-dollar business.

White said Jamba’s relationship with Nestlé has been “very strong and collaborative,”

But given the size of the giant global manufacturing brand, White said he was concerned that, “Jamba will not always be a top priority.”

The energy drink line has not been without challenges. Jamba first introduced the energy drinks in 2008 with Nestlé, but the beverages were pulled citing manufacturing problems. It took another two years to get the latest version to market.