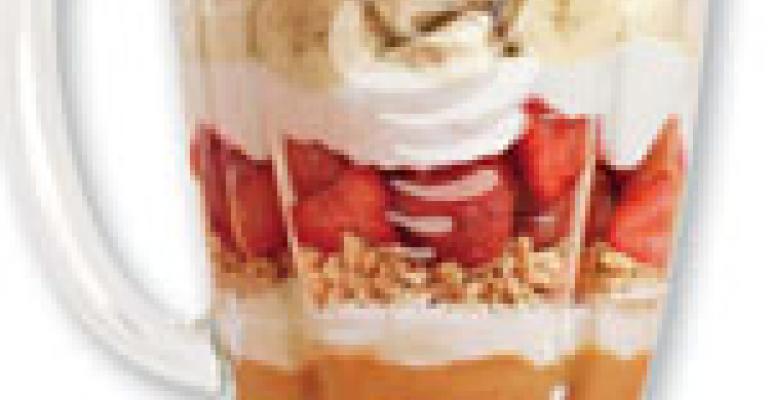 EMERYVILLE CALIF. Jamba Juice smoothie shops nationwide have experienced sluggish sales as the company’s stock has fallen into a tail-spin, is pinning turnaround hopes on new breakfast offerings being showcased in a free-smoothie promotion this week. —Jamba Inc., whose

But looming rollouts of new smoothie offerings by bargain-pricing chains like McDonald’s, Jack in the Box and others are expected to pose the same kinds of challenges for 707-unit Jamba Juice that analysts believe Starbucks Coffee could face as McDonald’s ramps up its chainwide roll-out of lower-priced espresso drinks. —Jamba Inc., whose

Jamba officials conceded to a gathering of nearly 1,000 general and district managers in Grapevine, Texas, recently that the economy is posing big challenges for specialty drink operators. —Jamba Inc., whose

Same-store sales at the franchisor’s more than 500 outlets fell 3.3 percent in last year’s fourth quarter, said Jamba president Paul Clayton. In California alone, same-store sales were off 4.7 percent, though outside of California they increased 1.7 percent. —Jamba Inc., whose

“The economic environment has been challenging and has impacted our store-level economics,” Clayton told the managers last month, about the same time as the Emeryville-based company’s announcement of a 10-unit cutback in planned corporate-store openings for 2008 put Jamba’s stock in a dive, driving it to a total decline of 38 percent for the year. —Jamba Inc., whose

However, Clayton told conference attendees that he thinks the chain is well-positioned for the future as it seeks to evolve from a smoothie-oriented brand to one that encompasses a range of lifestyle attributes. —Jamba Inc., whose

“Being a ‘healthy-living’ concept rather than just a smoothie concept will help us distinguish ourselves from competitors in the market,” Clayton said in an apparent reference to the planned launches of smoothies and smoothie-like drinks by lower-priced competitors. —Jamba Inc., whose

To differentiate itself and to firm up its marketing position in a “healthy-living” segment, Jamba launched its breakfast menu last month systemwide. Among its items are yogurt blends, reduced-fat baked goods, Omega-3 cookies and a spoonable Chunky Smoothie with fruit, organic granola, peanut butter, soy milk and nonfat yogurt. With breakfast, the chain’s usual array of freshly squeezed juices and protein and vitamin add-ins for smoothies continue their featured billing. —Jamba Inc., whose

“We are on a breakfast mission,” said Paul Coletta, Jamba’s senior vice president of marketing and brand development. “We’re encouraging America to make breakfast a priority, and feel the difference a healthy breakfast can make in their day.” —Jamba Inc., whose

Promotion of Jamba Juice’s breakfast launch will be funded from the company’s $13 million budget this year for marketing, Coletta said. —Jamba Inc., whose

To introduce existing and potential new customers to the new menu, Jamba Juice outlets systemwide were gearing up to serve free breakfast smoothies April 8. That day would mark the kickoff of the chain’s higher-sales spring and summer season, said Karen Kelley, senior vice president of operations. She said stores were staffing up for an expected turnout of up to 900 customers each that day, substantially higher than usual. —Jamba Inc., whose

Meanwhile, Jamba is developing several new prototype stores that will enhance the chain’s “freshness cues,” Coletta said. Part of the change would be to put more fresh produce in front of the customer and employ Earth-friendly materials such as bamboo. The company is also considering the use of new “green” materials for its cups as replacements for polystyrene, though that was still being researched, he said. —Jamba Inc., whose

Jamba had accelerated its expansion in recent years, adding 49 company stores in 2006 and 99 in 2007. But last month the company said it planned to add only 45 to 55 new corporate branches this year, down by 10 stores from formerly stated plans that included expectations franchisees would open 35 to 45 outlets. —Jamba Inc., whose

Word of the growth-plan reduction pushed Jamba’s stock down 8.4 percent to $2.28 in trading March 14, marking its lowest ebb since the company went public in June 2005. The price rebounded to $2.65 by the end of the month, but still was off substantially from its 52-week high of $10.89. —Jamba Inc., whose

“We expect the economic environment to continue to be challenging in 2008, thus we have decided to slow our growth of new company-store openings to enable us to focus on store-level performance,” Clayton said. —Jamba Inc., whose