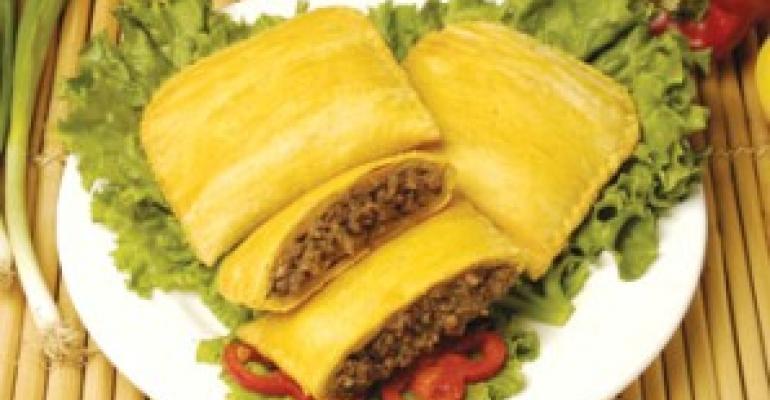 American consumers are constantly on the go, grabbing meals when they can, eating at their desks and in their cars. The success of recently launched chicken snack wraps at the major fast food chains reflects that. McDonald’s, KFC and Wendy’s have all launched such snacks, and Burger King has tested them, selling them for less than $2 and reporting robust sales in the mid-afternoon. According to NPD Foodworld, a consulting company based in Port Washington, N.Y., that is the fastest growing daypart.

But the United States is not alone in developing food for diners on the go, and the rest of the world just might have something to offer.

Sharon Hudgins, author of “The Other Side of Russia: A Slice of Life in Siberia and the Russian Far East,” published by Texas A&M University Press in 2003, points to Russian piroshkis, a type of Russian empanada, or its cousins, the lamb-filled chebureki found in some of the Asian countries of the former Soviet Union.

“And don’t forget roasted potato chunks, garnished with mayonnaise or fried onions or sautéed mushrooms, wrapped in cones made of pages torn out of books or magazines, sold by vendors on train platforms along the entire Trans-Siberian Railroad route,” she adds.

Find a substitute for the ink-stained paper, and there might be some appeal for diners who want a lower-fat break from fries.

“It is a disk of fried dough, often the size of a dinner plate, and is traditionally topped with sour cream, grated cheese and garlic, although it can be topped with other things as well, even jam.”

Kebabs and other meat skewers span the globe, from Malaysian satay, slathered in coconut milk, to spicy sticks of beef or mutton grilled by the Uighurs of western China.

One of the most popular street foods in Beijing, host to this summer’s Olympic games, is the jian bing. For that item, a large crêpe similar to those available in Paris is topped with an egg that is cracked over it on the griddle. The crêpe is then flipped over to cook the thinly spread egg. Meanwhile, the other side is spread with hoisin sauce, plus the option of hot sauce. A stick of unsweetened fried dough is placed on top, the crêpe is folded into quarters, wrapped in paper and handed to customers to eat as they walk.

A few items that started overseas have taken hold regionally here in the United States. In New York City, a crop of shops offering kati rolls have sprouted in recent years.

It’s really more like a wrap, made with a whole-wheat pan-griddled paratha, which is then stuffed with marinated chicken, lamb, paneer—a mild type of cubed cheese—or other items, sometimes with potato, garnished with raw onions, chaat masala, finely chopped cilantro and chutneys of mint and tamarind.

Some people claim that the kati roll originated in Calcutta in India’s Northeast, but the West Indian city of Bombay has a cousin, the Frankie, made with another wheat flat bread, the chapati, which is dipped in an egg wash, grilled and then stuffed with similar ingredients as the kati roll.

Another contender is the Jamaican patty.

Golden Krust, based in the Bronx, N.Y., claims to be the country’s largest patty chain, with 115 units in New York, New Jersey, Connecticut, Florida, Atlanta, Philadelphia and Maryland.

Traditionally, according to the chain’s literature, Jamaican patties are made with spiced ground beef, although the chain also offers curry and jerk chicken patties, as well as vegetable, fish, shrimp and tofu versions.

“These are gaining strong recognition and momentum among consumers,” it says.

The patties are baked on English speaking island and deep-fried in Latin America and Caribbean islands. In Jamaica, it is eaten as a sandwich filling, with cheese, on a sliced, sweetened, coconut-flavored roll called coco bread.

A regional delicacy that flourishes in northern Minnesota and Michigan’s Upper Peninsula is the Cornish pasty.

Pronounced pass-tee, the item originated in the British county of Cornwall.

Tim Tikkanen, executive director of Main Street Calumet, which promotes events in that Upper Peninsula town, including the annual PastyFest, says the hand-held pastries were brought to the area in the 1840s, following the discovery of copper in the area. Skilled miners from Cornwall arrived to ply their craft.

“Every ethnic group brought their foods with them,” says Tikkanen. “Over the generations, with the intermingling of the ethnic groups and cultures, they adopted each other’s foods and said, ‘Hey, that’s pretty good stuff.’”

Upper Peninsula native Patty Tyler makes the pasties at Cherokee, a restaurant owned by her son and daughter-in-law Aaron and Lisa Tyler in Muskegon, Mich., which is not in the Upper Peninsula.

She mixes ground beef with potato, onion and rutabaga.

“You definitely have to have some rutabagas in there,” she insists. “If you don’t have a rutabaga, then it’s not a real original pasty.” The uncooked items are wrapped in a dough that’s somewhat more substantial than a piecrust, and then baked. They’re eaten with brown gravy or ketchup, or occasionally mayonnaise. “But they’re fine all by themselves,” she says.

“There’s different ways to make them,” she says. “Some people use cut up chuck meat, but I like the meat to be evenly distributed with the potatoes. It makes a nice, solid meat pie,” she says.

Tyler also makes what she calls a Celtic or Scottish pie, which is made with sausage instead of beef—although she says some sausage can be added to a Cornish pasty—and cabbage instead of rutabaga.

Tikkanen says that turnips are a common addition to the local pasties.

“Some people have stronger sentiments than others,” he says, “but the Cornish people will kind of bristle if you add carrots to them.… Some of them will say that’s a Scandinavian additive.”

The fifth PastyFest, which started in 2004, will be held June 27-28. It includes a pasty bake-off in three categories—individual, commercial and nontraditional. In that last category, contestants have made breakfast pasties, Mexican pasties and others.

Versatile and appealing as pasties might be, Ming Tsai, chef-owner of Blue Ginger in Wellesley, Mass., and host of public television’s “Simply Ming,” is going in a different direction at the 50-seat lounge he added to Blue Ginger this month. There he is serving Ming’s Bings.

The ones Tsai refers to are hamburger bun-shaped dumplings made from hot-water dough, a traditional Chinese dough made of just flour and water that is used in a variety of dumplings.

“You roll out the dough into rounds, place the filling in the center and seal the dough around the filling to create sort of a hockey puck-shaped dumpling,” Tsai says. “Then, you sear both sides in a pan coated lightly with oil. Pour in water, cover with a lid and allow them to steam. You then remove the lid, allow them to recrisp and serve.”

Tsai was raised on bings stuffed with gingered pork, and those are available at Blue Ginger, but he also is offering a bacon cheeseburger bing, a roast duck bing—available with foie gras for guests who want it—and a wild mushroom vegetarian bing.

“We’ll also have a rotating bing of the week,” he adds.

He’ll be serving them with his signature Asian slaw dressed with shallot-pommery mustard vinaigrette, for about $10.

Simpler hand-held food is catching on as well. Alan Yossri, who runs a coffee cart in the upscale Brooklyn, N.Y., neighborhood of Park Slope, has started offering $ 1 hard-boiled eggs, along with the more traditional cinnamon rolls, bear claws and maple logs, at the request of his diet-conscious customers.

The chain sells two of them for $1.59, and is currently selling about 50 orders per week, up 15 percent from a year ago.