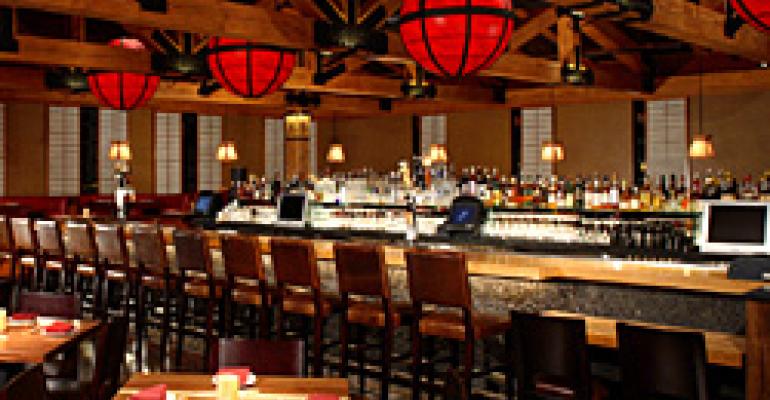 Four months into the opening run of Taneko Japanese Tavern, customers are "blown away" by exotic Japanese craft beers, and they're also taking to sake, shochu cocktails and a big-name, California-dominated wine list, according to Scottsdale, Ariz.-based P.F. Chang's China Bistro Inc., which unveiled its take on Japanese casual dining there last fall.

"Guests who try the restaurant really enjoy it," said development partner Rich Sullivan, who is joined in that role by chef Paul Muller. "They love the quality of the food, and they're really embracing the entire beverage program."

Both men are company veterans. Sullivan is one of the creators of the P.F. Chang's concept, while Muller is the former culinary operations head of both Chang's and its lower-priced sister brand, Pei Wei Asian Diner.

The concept's food-to-beverage ratio is 73/27.The sales contribution of Taneko's four types of alcoholic beverages is 12 percent wine and 5 percent each of sake, liquor and beer.

When it comes to beer, an izakaya staple, Taneko has a deeper and more esoteric selection than its typical Japanese counterpart. The headliner of the 17-item brew list is Hitachino Nest, a limited-availability, craft-brewed Japanese beer. There are seven kinds: Hitachino Nest White Ale; Ginger; Weizen; Classic Ale; Sweet Stout; and Red Rice — each in bottles, priced at $7 to $8, plus a seasonally changing draft brew priced at $7. Other selections include Japanese brands like Sapporo Draft, at $5, Kirin Ichiban Draft, $4, and Asahi Select,$4, which are widely distributed in the United States.

Customers are reacting "very favorably" to Hitachino Nest, Sullivan said. "They're blown away when they try it." The favorite is Classic Ale, which he described as "full-bodied and very approachable" in character.

When it comes to sake, another izakaya mainstay, Americans are on unfamiliar ground. For guidance, Taneko arranges 16 brands of the Japanese fermented rice beverage into three categories based on rice milling percentage. Higher-quality sakes are brewed from more highly milled grain.

The three quality levels are Junmai sake, made with rice milled to 70 percent of its original size; Junmai Ginjo, with rice milled to 60 percent; and Junmai Dai Ginjo, milled to 35 percent. A fourth group, Specialty Sake, has brands that stand out because they're unfiltered, cedar-aged or unusual in some other way.

Serving the sakes chilled in wine glasses rather than in traditional ceramic cups "makes a huge difference in the aroma, flavor and subtleties," said Sullivan. "People say they didn't know that sake could be so fragrant, so wine-like."

In addition, Taneko has a full bar that offers familiar American cocktails as well as house specialty drinks made with shochu, a Japanese spirit distilled from fermented sweet potatoes, rice or other starches. Drinks like Ropponngi Fizz, $8, made with shochu, lychee, yuzu and fresh citrus and Hibiya-tini, $9, with shochu, Japanese cucumber and fresh lime, feature the clear spirit, which resembles vodka but is less potent. It typically has an alcohol content of 25 percent, while vodka is usually 40 percent or higher.

"The adventurous diners are jumping on it and embracing it," said Sullivan. "Other people just want their Scotch on the rocks or Stoli with soda. We don't try to drive them in any particular direction."

Taneko's wine list also departs from the izakaya model in quantity and quality. The main list numbers 56 selections, more than half from California, drawn from well-known vineyards and production zones. "We have a Brancott [New Zealand] Pinot Noir, we have Washington Merlot and Central Coast Chardonnay," said Sullivan. "Even within Napa and Sonoma, we went specifically to Russian River, Carneros and Stag's Leap for wines we appreciate."

"In Japan, or in Japanese places in New York or L.A., wine selections are truly limited," said Sullivan. "They want to push you into beer or sake. But we believe that the consumer wants nicer wines with the dining experience."