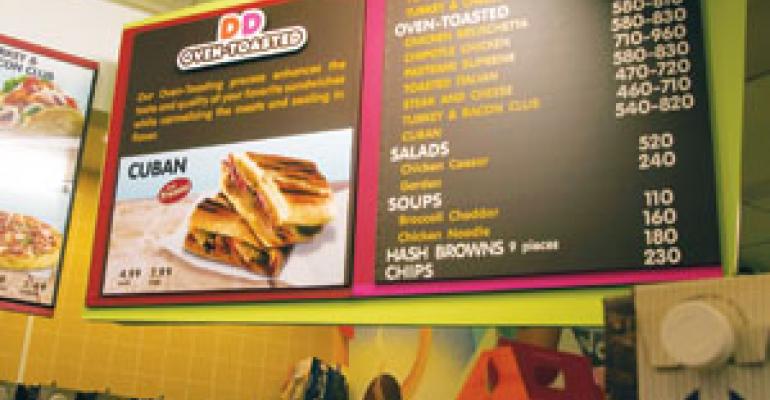 One standard for all. That’s the new battle cry as the restaurant industry faces a growing patchwork of city, county and state mandates requiring chain operators to post nutrition data on menus and menu boards.

While many agree nutrition disclosure is a good idea, foodservice industry lobbyists in the past have opposed a one-size-fits-all approach to menu labeling, arguing that restaurant operators need flexibility to communicate such information.

Now the industry is rallying behind proposed federal legislation that would create one standard for menu disclosure at chain restaurants nationwide. Supporters say it creates a level playing field.

Currently, chain operators with units in New York City, where rules were enacted in July, face the challenge of compliance with different regulations in the metropolitan areas of Seattle and Portland, Ore., where mandates are scheduled to be enforced early next year. Last month, California became the first state to adopt a menu-labeling mandate, overriding different rules adopted this year in San Francisco, Santa Clara and San Mateo counties.

All such local efforts, however, would be pre-empted at the federal level if a bill introduced last month by Sen. Thomas Carper, D-Del., is signed into law. Known as the Labeling Education and Nutrition, or LEAN, Act, the measure would require restaurant chains with 20 or more stores nationwide to post calorie counts and offer additional nutrition data at the point of sale.

The proposal, which was co-sponsored by Carper and Sen. Lisa Murkowski, R-Alaska, has the support of the National Restaurant Association, the National Council of Chain Restaurants and the International Franchise Association, all of which now are pushing for national uniformity.

The LEAN Act provides a year for drafting the regulations, a year for gathering input and suggested revisions from the industry, and six months for restaurants to comply. However, if Congress approves Carper’s bill, state and local laws would be pre-empted immediately after the bill is signed into law.

“As a former governor, I know there are issues that can and should be handled at the state and local level, but healthy nutrition and obesity are national issues that cry for a national solution, and our bipartisan legislation provides a platform to gather everyone to the table and begin that national discussion,” he says. “This bill is not going to magically solve our obesity problems, but I do believe we have a responsibility to give Americans, more and more of whom are eating outside the home these days, the tools they need to make healthy, educated choices.”

The Carper-Murkowski bill is not the only proposed piece of federal legislation that addresses nutrition labeling, however. Rep. Rosa De-Lauro, D-Conn., and Sen. Tom Harkin, D-Iowa, earlier introduced menu-labeling measures into the U.S. House and Senate, respectively. De-Lauro’s bill would require certain chain restaurants to list calories, saturated and trans fats, and sodium content on printed menus, and calories on menu boards. Harkin’s measure would require restaurants with 20 or more locations to disclose calories, grams of saturated fat and trans fat, and milligrams of sodium on menus.

The foodservice industry does not support either Harkin’s or De-Lauro’s bill.

Under the LEAN Act, chain restaurants and grocery stores using menu boards would be required to disclose calorie counts either on the menu board, a sign next to the board or on a poster that consumers can read while in line.

Restaurants with menus must list calories either directly on menus or provide the information on an insert, appendix or supplemental document.

Regardless of how they listed menu choices, the applicable chain restaurants would be required to make available upon request additional information on 10 other nutrients for each regular menu item. The information, mirroring what is required for packaged foods, would have to be provided in writing at the point of sale.

The bill also includes language that protects restaurants from liability if they comply with the law.

For now, however, operators in some jurisdictions are in a sort of limbo, planning as best they can for compliance at the local level, despite the potentially shifting political landscape ahead.

Some operators have chosen not to wait for legislation to be enacted, however. Yum! Brands Inc. said its U.S. brands—KFC, Taco Bell, Pizza Hut, A&W All-American Food and Long John Silver’s—would voluntarily list calorie data on their menu boards in all domestic company-owned locations. Yum will urge its franchisees to list calorie data on their units’ menus as well. The Louisville, Ky.-based company said the information would begin to be phased in this year and completed by Jan. 1, 2011. Yum officials also are calling for uniform federal guidelines based on the recently passed California regulations for menu board labeling.

Portland-based Elmer’s Restaurants Inc., which operates 35 restaurants under the Elmer’s, Mitzel’s American Kitchen and Taprock Northwest Grill brands, has units in Seattle, Portland and California, all of which may be following different rules for nutrition disclosure next year.

Menu-labeling mandates have been adopted in Washington state’s King County, which includes Seattle, as well as Oregon’s Multnomah County, which encompasses Portland.

The Seattle-area mandate went into effect Aug. 1, though full enforcement is not scheduled until Jan. 1. In Portland, enactment is scheduled to begin in January, but restaurants will have a six-month grace period to comply.

Restaurant operators in Multnomah County are waiting for health department officials to hammer out details on the rules there, which will apply to chains with 16 or more units.

County commissioners passed a “policy order” requiring chains to post calorie information on menus and menu boards, with additional information on saturated and trans fats, carbohydrates, and sodium available upon request at point of sale, though operators can use a variety of methods to convey that information, including brochures, posters or menu inserts.

Further details are scheduled to be hashed out in public hearings through October and November, with final rules expected in December. Meanwhile, the Oregon Restaurant Association is lobbying for state legislation to be introduced in January that would at least allow for the same rules statewide in the absence of a national standard.

In Seattle, the nutrition disclosure mandate applies to chains with 16 or more units, but the rules there also are flexible, allowing restaurants to choose among various methods to communicate nutrition information, including supplemental menus, inserts, an appendix or even electronic kiosks at the table. An estimated 1,700 restaurants in King County will be impacted.

“We may not like the idea of having to comply with one or two or three different ordinances or laws, but we’ll have to,” says Jerry Scott, Elmer’s vice president for operations, development and administration. “There’s definitely a need for federal legislation.”

At this point, too much is uncertain to even determine the cost for impacted units within the Elmer’s chain, he says.

“The devil’s in the details,” he says.

Even operators in just one of the impacted jurisdictions say they are holding off on compliance until necessary.

“We’re still in the discussion stage” about how to comply, says Tucker McHugh, vice president of the Seattle-based Caffe Appassionato chain.

Five of the chain’s 15 units are in King County, but McHugh says there are plans to apply the same nutrition disclosure tactics systemwide in anticipation of a federal mandate.

“Once one community gets a stronghold in doing this, it’s just a matter of time before it goes national,” he says.

In California, where operators with units in San Francisco and neighboring Santa Clara and San Mateo counties had been preparing to comply with menu-labeling mandates in the three jurisdictions, the issue of compliance is no longer in flux. Local efforts will be superceded by the recently passed state legislation, beginning Jan. 1.

As a result the California Restaurant Association dropped its legal challenge of ordinances passed in San Francisco and Santa Clara counties.

Signed by Gov. Arnold Schwarzenegger on Sept. 30, the menu-labeling mandate in California was a compromise forged with help from the CRA, which won the addition of several key provisions to ease compliance for chain operators.

“It’s the best we could have gotten and it’s a law whose time has come,” says CRA president and chief executive Jot Condie.

Under the bill, chain operators with 20 or more units in the state will be required on July 1, 2009, to disclose calorie data for standard menu items directly on menus or menu boards, or they can choose to offer that plus data on fat, sodium and carbohydrate content in brochures that would be available on request at point of sale.

However, by Jan. 1, 2011, all affected restaurants would have to post the calorie information on menus and menu boards. Industry officials say most operators would choose to post calorie counts in July and be done with it.

Uncertainty remains, however, given the potential federal legislation.

The chain spent roughly $10,000 to $15,000 for the nutritional analysis. Adding calorie counts to the menu would not be difficult, he said, given menus are reprinted fairly regularly.

Yard House would not be required to comply with the menu-labeling mandate because not all of the chain’s 20 units are in California, but Herrmann said his and other chains will feel compelled to do it anyway.

“It’s what the consumers are looking for,” Herrmann says. “I think anybody in the prepared-foods business should participate because, if you don’t, it’ll look like you’re hiding something.”

This story is part of the "Industry Issues" special report, dealing with topics specific to the industry for the November election. Non-subscribers can purchase the full story by clicking here.