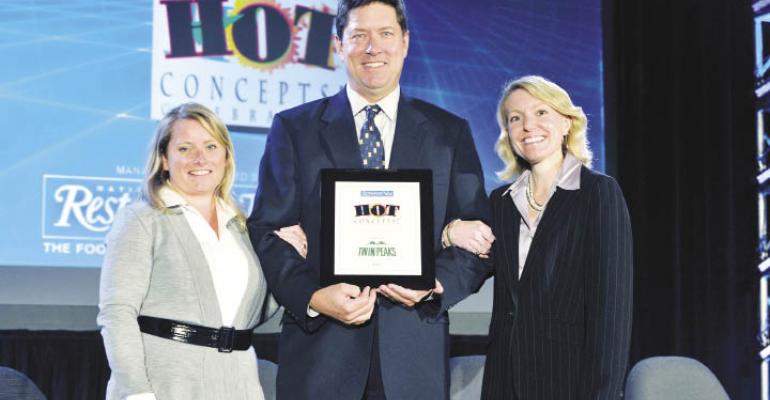 Striking up personal connections with customers is key to standing out from the competition, said executives from this year’s four Hot Concepts! Award-winning chains.

Though the winners — a sexy sports bar, a classic burger joint, a wine-driven casual concept and an eco-friendly pizza chain — may seem to have little in common, they were quick to zero in on this shared strategy during a panel discussion at this year’s MUFSO conference.

“It’s business 101. You’ve got to engage them,” said Mark Begelman, chief executive of Pizza Fusion, an environmentally oriented pizza concept based in Fort Lauderdale, Fla. “There needs to be that ‘wow’ factor when they walk in, but, more importantly, that ‘wow’ factor when they walk out — something intangible. That’s what’s going to make them tell their friends and come back.”

Begelman’s 19-unit chain aims to build a reputation with customers as a forward-thinking and eco-conscious brand that makes a positive impact in the communities it serves. All of its stores are LEED, or Leadership in Energy and Environmental Design, certified, and organic ingredients are used whenever possible.

“If businesses don’t lead the way on green, who will?” Begelman asked.

Cooper’s Hawk, a four-unit wine-focused casual concept, keeps guests coming back with its wine club, a paid loyalty program that is now 18,000 members strong. Members pay $18.99 a month, which entitles them to one bottle a month of an exclusive, members-only wine, a free birthday meal and special events, among other perks. The program gives guests a VIP experience, and nearly guarantees repeat visits, he said.

“You have 18,000 members visiting on a monthly basis,” McEnery said. “The mechanics of that program have driven same-store sales increases.”

For Twin Peaks, winning over customers comes from providing an escape from the drudgery of the everyday. The sports bar caters to its primarily male audience with hearty bar food, a masculine hunting lodge motif and attractive, scantily clad waitresses.

Dewitt said the chain strives to keep customers coming back by helping to turn everyday events, say an NFL game, into cause for celebration. By establishing Twin Peaks as a go-to destination for sports games, holidays and other occasions, the chain becomes part of fond memories and is more likely to benefit from repeat visits.

Shake Shack has benefited from two macro trends — consumers trading down and the rise of the “better burger” — but Swinghamer said the chain isn’t content just to ride those waves. Instead, it focuses on being a good community member in the markets it serves, something that will outlast fickle trends.

“We’re trying to stay true to who we are,” he said. “We’re more than just burgers. We create an environment where people want to be with other people.”

Shake Shack, which is known for long lines at its New York locations, allows customers to check if there’s a crowd at its Madison Square Park location on its website with a real-time “Shack Cam” before heading to the store. It’s just another way to keep the chain top-of-mind for guests when they’re not in the restaurants, Swinghamer said.

Creating connections with customers can have benefits beyond just increasing sales, he added. Indeed, it can help clarify the direction in which the brand should evolve.

“Give [customers] a way to communicate with you,” Swinghamer said. “They’ll tell you what to do.”