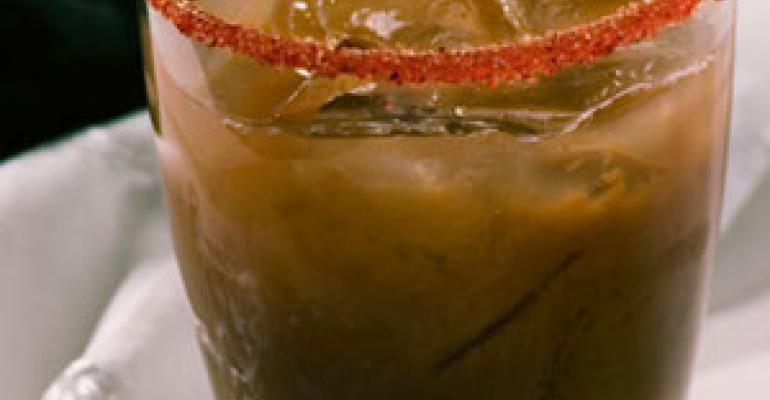 The heat is on at the bar

Ranging from a tingle to a flat-out burn, the sensation of heat on the palate is the bartender’s new toy.

The tool kit for dialing up the spice at the bar includes chiles in various guises, fresh ginger and other Asian spices, according to mixologists.

“There is kind of an upturn of spicy cocktails,” said Thomas Gullo, mixologist at Zengo in Santa Monica, Calif., one of the 23 eateries in New York City-based Richard Sandoval Restaurants. “Some people are sick and tired of a typical margarita or a mojito and they like some muddled jalapeno or togarashi spice to step it up.”

Zengo has a leg up in this area because its bar and kitchen borrow from Latin and Asian cuisines. Its Tamarind-Togarashi Margarita shows the twin cultural influences. It is flavored with house-made tamarind purée, spiked with silver tequila and served in a glass rimmed with togarashi salt, made by combining togarashi, a piquant Japanese seven-spice blend, with salt and other seasonings.

“You have the spiciness of the togarashi, the slight smokiness of the tequila and the flavor of the tamarind which is a little bit earthy and a little sour,” Gullo said.

Gullo pegged the heat level as “moderate.” However, he keeps a batch of serrano chile-infused sour mix for patrons who want more burn. “You can always add heat, but you can’t take it away,” he said.

Tad Carducci, part of the cocktail consulting duo called the Tippling Bros., reported “a huge spike in cocktails with heat in the past year.”

“Chiles affect the body of a cocktail and all the expressions of it,” he said. “Chiles also elicit the same feelings in a person as being in love does. They flush the face and make the lips swell, all those things that we associate with being infatuated or in love. Obviously, most people enjoy that feeling, so I think there is a correlation.”

A cocktail that showcases such a tinge is the Smokey Pablo, a combination of reposado tequila, morita chile syrup, mango purée, lime and blueberry purée. It is a specialty of the Mercadito Mexican restaurants of which Carducci is a partner, with five locations in New York, Chicago and Miami.

At Anvil Bar & Refuge, you don’t have to be a fire eater to enjoy Pliny’s Tonic, even though the cocktail includes a house-made tincture of intense habanero chiles, said mixologist Bobby Heugel.

Pliny’s Tonic is made with gin, lime, simple syrup, muddled cucumber and mint leaves, and two dashes of habanero tincture, which is made by soaking 60 habaneros in a liter of neutral grain alcohol for a week

“When you taste the cocktail, it is very refreshing and light with a cooling sensation from the mint,” Heugel said. “Then the heat of the peppers surprises you at the end. You are like, ‘Wow, I am surprised by a component in this drink.’”

Of course, Heugel isn’t the first or the only practitioner of chile-laced libations in the Southwest. Dallas-based celebrity chef and restaurateur Stephan Pyles, for one, has been in the game for years. His restaurant Stephan Pyles offers the signature Pina Diablo, based on an infusion of chopped pineapples, serrano chiles, fresh mint, vanilla, cinnamon, and brown sugar in three types of rum, soaked in a five-gallon jar at the bar. It produces a heady liquor that is shaken and served up with a chunk of marinated pineapple for garnish.

“We tell them that it is going to be spicy, but they like the spiciness of it,” said managing partner/owner George Majdalani. “Some people even ask for one of the serranos from the jar.”

Drinks with heat “are steadily increasing in popularity” at Boka Restaurant & Bar in Chicago, said Ben Schiller, mixologist of the contemporary American spot. “Everything that is a food trend, the bar is just playing catch-up to.”

To give a drink zing, Schiller said he usually adds a syrup made with equal parts fresh ginger root juice and sugar, on occasion made even livelier with the addition of Thai bird chiles.

In Los Angeles, the Italian-inspired Bar Toscana is no stranger to the spicy drink trend, either. Bar manager William Perbellini gives the Pepe Martini a zesty edge by muddling in two or three jalapeno-stuffed olives. He also makes a tequila drink called the Mexico Piccante with a muddle of jalapeno slices, micro basil and cucumber.

“Very often people ask for something spicy because they want to discover new tastes that are different from the sweet, sugary, fruity drinks,” Perbellini said.