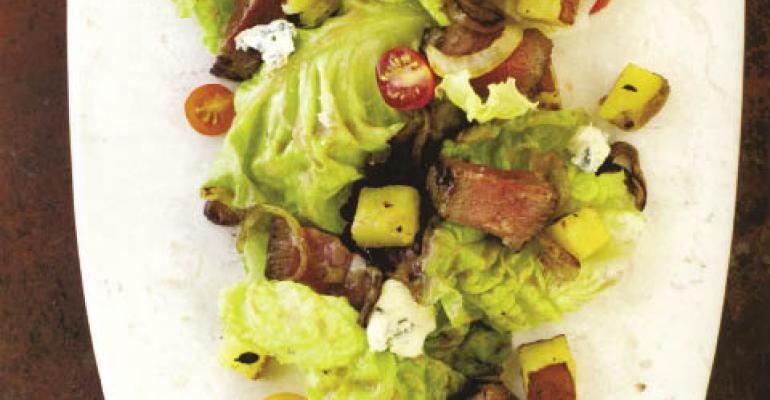 When John Bornoty opened The Big Salad in 2008, he expected customers at the Grosse Pointe, Mich., restaurant to be excited about the concept’s fresh, filling salads.

But he had no idea his namesake dish already had a famous fan — “Seinfeld” character Elaine Benes. Bornoty, a former software engineer who watches little television, said he wasn’t aware that Elaine’s meal of choice, a “big salad,” was the theme of an episode until numerous customers asked if he was inspired by the comedy.

The pop-culture connection may have given the business added attention, but Bornoty, who is scheduled to open two more units in Michigan this year, said he saw potential for the entrée salad market all along.

Salad concepts’ inexpensive operations — there’s no need for ovens, chefs or cooks — their image of healthfulness and the ability to let patrons customize their meals all make the segment ripe for growth, he said.

Other chains are banking on increased interest in main-course salads as well. Orlando, Fla.-based The Capital Grille is serving a Mediterranean Chicken Salad at six of the chain’s 40 locations, said Jim Nuetzi, the chain’s corporate executive chef. The dish is doing so well at lunch that he included it on his proposed menu of the Beverly Hills, Calif., store that’s set to open its doors this month.

And he’s holding a place for the salad on the new companywide menu scheduled for a September launch. The dish features cooled chicken strips that are marinated in thyme, garlic and olive oil and then grilled. The chicken is tossed with olive-oil-cured black olives, pepperoncini, roasted tomatoes, feta cheese, field greens and olive vinaigrette. Onion pita croutons add a crunch to the $12 salad, which is served in a 12-inch bowl.

“It has been extremely successful, and enthusiasm from guests has been very high,”  Nuetzi said.

All of the elements come from the same pantry station, he added, as opposed to dishes that combine warm and cool elements being coordinated from different departments of the kitchen. So it’s a little faster and easier to assemble than the popular 10-ounce grilled-sirloin salad, a $21 lunch entrée composed of the warm meat, greens, grilled asparagus, roasted tomatoes and Roquefort dressing.

Both dishes sell well because they have a healthful image, he said.

“It is enormously popular at lunch when people like to eat food that they perceive to be lighter,” Nuetzi said. “When I joined The Capital Grille 12 years ago, we sold a lot more heavy entrées at lunch.

He said salads also capitalize on two other trends The Capital Grille’s diners crave: customization and experimentation. So many Capital Grille diners request a protein with their tomato and mozzarella salads that Nuetzi asked his IT department to add buttons on the ordering system so servers could easily punch in an added side of grilled chicken or grilled steak to any existing dish.

Many diners also use salads as a way to sample more exotic ingredients.

“They want to experiment and try different things,” Nuetzi said.

And operators are listening.

According to the firm Datassential’s MenuTrends, grilled salmon is the new grilled chicken for entrée salads. Of the 4,500 chains and independent restaurants surveyed, the number of chains offering grilled salmon as a salad protein rose 14.3 percent between 2009 and 2010.

Daring to be different

Diners aren’t the only ones looking to experiment. Chefs are playing with various flavors and textures in their salad offerings.

“We like to be a little different,” said Christopher S. Gatto, executive chef and vice president food and beverage of Boston-based, 165-unit Uno Chicago Grill, where a chicken Milanese main-course salad has been a longtime hit and a new line of chopped salads were recently added to the core menu. The Milanese salad sells for about $13.29 and the new chopped salads are priced in the $9.79-to-$10.49 range.

“The beauty of a chopped [salad] is you get the taste of everything in one bite,” Gatto said.

One hit salad on the menu at San Francisco-based Mixt Greens, which has eight locations in California and the Washington, D.C., area, is the Bachelor salad, an unconventional mix of lettuce, warm grilled Prime flat-iron steak, warm herb-roasted potatoes, cherry tomatoes, blue cheese and balsamic vinaigrette, topped with caramelized onions.

“I designed this salad at Mixt Greens to win over men and get them to start eating salads,” chef-partner Andrew Swallow said of the $11.95 salad. “Putting these ingredients together almost forces them to try it. It’s one of the best sellers at the restaurants.”

But he will not divulge how he keeps the potatoes warm during service. He says he’s been copied a lot already, and his technique is one of the tricks of his success.

On the more adventurous side, he serves a Maui salad with butter lettuce, coriander-crusted seared ahi tuna, avocado, cherry tomatoes, mango, cucumber, red onion and mango-citrus vinaigrette, topped with crushed macadamia nuts for $10.95. “The idea behind this salad came from one of my favorite sushi rolls made here in San Francisco: avocado, mango and macadamia nuts,” he said.

“People are into eating really good salads,” Swallow added. “I don’t think salads are going to come and go. They are only going to be more in demand, because they’re healthy.

“[Customers] are really enjoying a salad as an entrée and having them for lunch and dinner. It fills them up. And people are blown away by how big our salads are.

“A burger will put you to sleep,” he said. “But a salad isn’t going to interrupt your process.”

Four more Mixt Greens locations are expected to open before the year-end, and another eight to 10 are planned in 2011.

You want it, you got it

Customization is the name of the game at Maitland, Fla.-based Sonny’s Bar-B-Q.

“If it’s not on the menu, just ask for it,” is the policy at the barbecue chain’s 129 stores, said Monique Yeager, director of public relations. Guests can order any of the barbecue meats over any salad.

On the regular menu Sonny’s Garden of Eatin’ Big Salads sell on average for $7.60, depending on the market. They feature a warm meat, such as char-grilled chicken, fried chicken tenders or smoked turkey, and a spring mix of greens with candied pecans, dried cranberries, cherry tomatoes, cucumbers, green peppers and croutons.

Back at The Big Salad, Bornoty gives folks what they want, but he shuns warm and cool mixtures on one plate because he said a salad should be cold.

He recently had success with the precooked cold Big Baja Chicken Salad as one of his rotating monthly salad specials, so he added it to his regular menu.

Though first-timers gravitate toward signature salads listed on the menu, most regulars prefer build-your-own salads, Bornoty said. In fact, 80 percent of guests customize their own.

“They love picking their own ingredients,” Bornoty said.