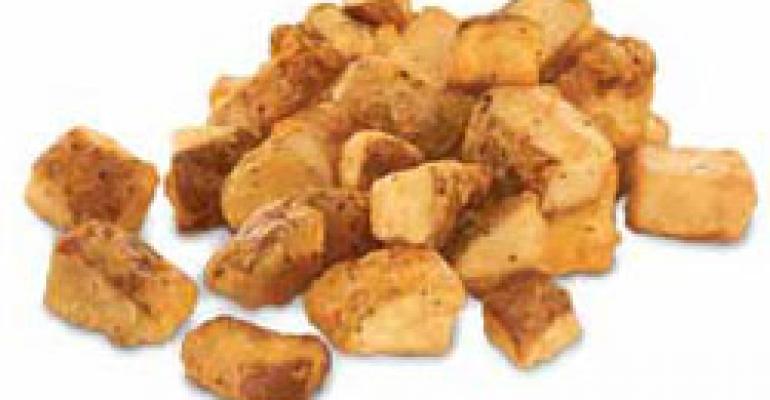 ST. LOUIS Hardee's said it has added two breakfast items in an effort to elevate its morning lineup the same way the chain's Thickburgers put its lunch and dinner menus on par with casual-dining competitors.

The Ham & Three Cheese Burrito combines diced ham and cheddar, American and Swiss cheeses with two folded eggs in a warm flour tortilla. The Country Potatoes side dish, which replaces Hardee's Hashround potato item, features cubed chunks of skin-on potatoes seasoned with salt and pepper. The burrito and the potatoes sell for a suggested $2.69 and $1.09 each, respectively. They're also available together in a small combo for $4.29.

The new items are the latest that Hardee’s has introduced to bring its breakfast menu more in line with the fare at sit-down restaurants. The chain's other offerings have included Made from Scratch Biscuits and the Country Breakfast Burrito, a 920-calorie entrée complete with hash browns and sausage gravy rolled in a tortilla.

“Our famous Made from Scratch buttermilk biscuits have always been very popular, but we still had a few opportunities to further narrow the gap with sit-down restaurants on our breakfast menu,” said Brad Haley, executive vice president of marketing for St. Louis-based Hardee’s. “So, we have taken a very popular breakfast omelet and made it easy to eat on the go with our new Ham & Three Cheese Breakfast Burrito, and what better complement to a great diner-style breakfast entrŽe than our new Country Potatoes.”

Hardee’s still faces stiff competition from quick-service and family-dining players as it tries to make inroads with a more premium breakfast lineup. Denny’s, for example, earlier this year launched its Real B-FST 2GO program, complete with domed takeout containers that allowed its breakfasts to remain warm for up to 30 minutes. Denny’s also ran a marketing campaign all year disparaging “phony” breakfasts sold at quick-service chains. Despite that, stalwarts in the fast-food segment have introduced successful breakfast items this past year, such as McDonald's with its Southern Style Chicken Biscuit.

Hardee's, which has 1,912 units, is a division of Carpinteria, Calif.-based CKE Restaurants Inc.