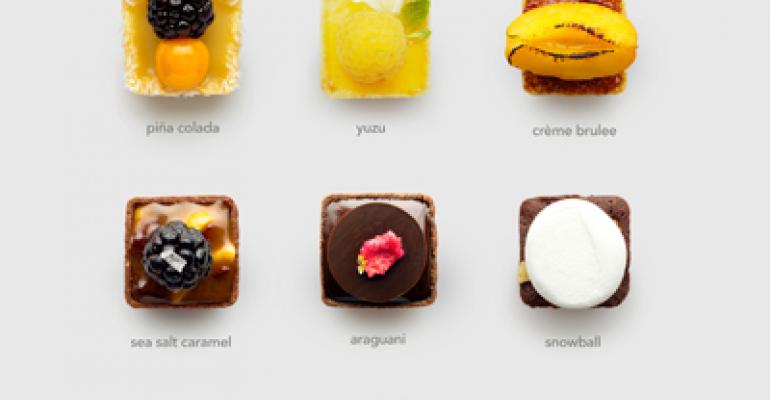 Going beyond the cupcake

Even as the now-public Crumbs cupcake chain was making its debut on the Nasdaq last week, pastry entrepreneurs already were predicting the trend’s demise, saying American consumers are ready to move on.

In Los Angeles, for example, where arguably the gourmet cupcake craze began with the debut of the first Sprinkles in 2005, two new pastry concepts aim to steal cupcake market share with innovative sweets that break new ground, such as exotic mini tarts and a more healthful baked donut dubbed a Fonut.

And even Sprinkles, the now 10-unit cupcake concept based in Los Angeles may be forging into new territory. The cupcake operators are reportedly launching a new ice cream parlor concept called Red Velvet adjacent to their original cupcake bakery in Beverly Hills, Calif.-- though a spokeswoman for the company declined to comment.

That’s not to say cupcakes are going away.

New York-based Crumbs, which was founded in 2009 and has 35 locations, said it plans to grow to about 200 locations in the top 15 markets across the country by the end of 2014.

And most major cities have some version of upscale cupcake shop, many of which offer mini or maxi versions of the childhood favorite, as well as other variations on the theme.

Still, Waylynn Lucas, the former pastry chef of The Bazaar by Jose Andres and Patina in Los Angeles, would be very happy to call it quits for cupcakes.

“I think cupcakes are overly sweet and dry,” she said. “I’ve been hell bent on ridding the world, or at least my world, of the cupcake craze.”

Lucas is a few weeks away from opening her bakery concept called Fonuts, an upscale coffeeshop that will feature the high-end beans of a local roaster, as well as her new donut-like creations for which the concept is named.

The goal is to create an artisanal coffee shop that has great coffee and great baked goods — a rarity in Los Angeles, Lucas contends.

Trained in the ways of molecular gastronomy, Lucas has developed steam/baked versions of both cake-style and yeast-raised donuts that rival the light, fluffy texture of the typically fried real thing without deep frying.

She makes no promises yet about being low in calorie — not until the products have been thoroughly tested. But she assumes they are a more healthful alternative by nature of not being fried.

The shop’s dozens of flavors will include both sweet and savory Fonuts, from the traditional to avant garde. A savory Fonut, for example, includes a rosemary and olive oil version that looks like a classic powdered donut, but the powder is actually made with olive oil and tapioca malodextrin.

“I love the idea of taking familiar flavors and presenting it in a way you’ve never seen before,” she said.

The shop also will offer a gluten-free and vegan banana bread, and some teas and lattes. But the goal is to keep the concept simple and build a fan base for Fonuts, which Lucas contends could have a much broader audience than cupcakes.

“Men love donuts,” she noted, while cupcakes tend to appeal more to women.

Not far from the Los Angeles location of Fonuts is the new Früute in West Hollywood, another new concept based on the simple idea of mini tarts.

Branding specialist Yolanda Santosa said she loves tarts, but they’re often only available in one or two flavors and in large sizes.

Hoping to expand the category, Santosa partnered with her mother and sister, to launch Früute, which opened July 2. On the menu is a line of tiny tarts in exotic flavors, each no bigger than an egg, made with organic flour, milk and eggs.

The classic fruit tart, for example, includes three single berries — a blackberry, and a red and yellow raspberry — on a vanilla custard in a vanilla crust.

A citron version features lime-spiked custard in a pistachio crust, topped with meringue; and the pina colada includes pineapple, coconut and rum in a coconut-sprinkled crust topped with a blackberry and a gooseberry.

Some are not fruit tarts at all, veering more toward the petit four.

For example, one version features tiramisu made with a coffee liqueur in a chocolate crust dusted with cocoa dust and topped with a dark-and-white chocolate straw.

The budino features butterscotch pudding in a chocolate crust topped with a caramel macaroon; and the “Bailey’s puff” includes Irish cream with chocolate pearls in a vanilla crust, topped with tiny profiteroles and drizzled with chocolate.

Santosa said the upscale pricing reflects the top-quality ingredients and artful design of each pastry.

“Mini desserts are the next big thing,” she said. “Everyone wants to curate what they eat, and they want flights of different flavors.”