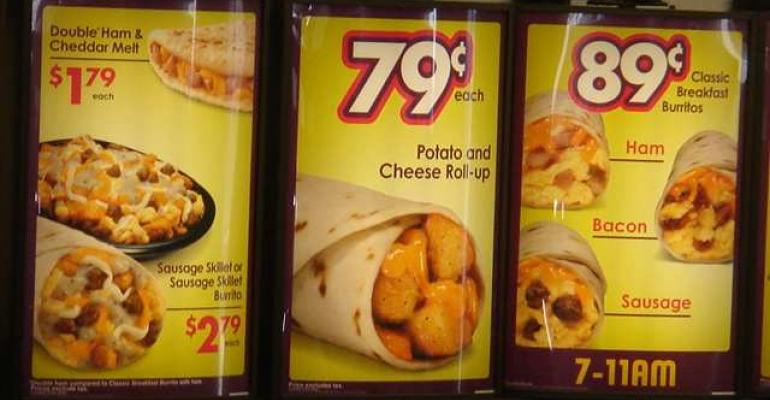 A glimpse at Taco Bell breakfast

Taco Bell won’t be the first chain to mine the morning daypart for sales growth, but at least one analyst has said breakfast could propel the fortunes of the country’s largest quick-service Mexican brand and its parent company, Yum! Brands Inc.

Irvine, Calif.-based Taco Bell has tested breakfast before, but now the chain is expected to introduce a permanent menu for the morning daypart at its 5,600 restaurants in the United States some time in late 2011 or 2012.

Quick-service competition for breakfast is fierce, with Subway the latest brand to debut a breakfast platform taking on early risers McDonald’s and Burger King. But analyst Mark Kalinowski of Janney Montgomery Scott Capital Markets in New York said Taco Bell’s positioning as the segment’s largest Mexican brand, and its market leadership in value pricing, have it poised to capitalize on the morning meal.

“Obviously, a nationwide breakfast launch is not assured of rousing success — just ask Wendy’s,” Kalinowski wrote in a research note Tuesday. “Nevertheless, the long-term opportunity for Taco Bell is so large, and Taco Bell’s differentiated brand positioning [is] such a potential help, that over the long run we believe that Taco Bell will get it right, creating value for shareholders in the process.”

Kalinowski’s observations came following the tour of a Taco Bell location serving breakfast in Tucson, Ariz., one of only a few test markets.

“Over the last 20 years, when Taco Bell has previously tested breakfast, it emphasized a higher flavor profile and/or food quantity,” Kalinowski wrote. “With this test, though, value, including value pricing, seems paramount.”

Kalinowski holds a Buy rating on Yum Brands and Janney Montgomery does seek investment banking business with the Louisville, Ky.-based company. Kalinowski does not personally hold any shares of Yum Brands.

Several menu strategies are in play with Taco Bell’s offerings, including:

• Value-priced items, like the Potato & Cheese Roll-up for 79 cents, three varieties of Classic Breakfast Burritos for 89 cents and a Hash Brown for 99 cents. These offerings closely mirror the 79-, 89- and 99-cent items on Taco Bell’s “Why Pay More?” menu. Kalinowski noted that the value items are displayed most prominently of any products on the breakfast menu.

• Products created with partner brands, like Cinnabon Delights for $1.49, a Morning Wrap and Morning Biscuit, both made with Jimmy Dean sausages, selling for $1.79, and Seattle’s Best Coffee, available in a regular size for 99 cents and a large size for $1.49.

• Four different combo meals for $4 each.

The analyst shared in his research note that, while Taco Bell has tinkered with breakfast offerings before, the new menu in test has performed well. Management had shared with Kalinowski that some Taco Bells in California had been serving a hold-over breakfast menu introduced years ago, and that when the new menu was introduced, breakfast sales increased about 60 percent on average.

McDonald’s and Burger King, both of which entered breakfast in the 1970s, generate about 25 percent and 14 percent, respectively, of their domestic sales from breakfast. Burger King and Subway both have tapped Seattle’s Best to upgrade their brewed coffee, while McDonald’s continues to bolster its McCafé line of espresso-based premium coffee.

Taco Bell management told Kalinowski that the chain would complete the national rollout of breakfast if the daypart proves able to add at least $65,000 to $70,000 in annual sales per unit, the analyst noted.

“In the short run following this anticipated launch, we look for breakfast to represent a low-to-mid single-digit percentage of sales for the Taco Bell brand in the U.S.,” he wrote. “However, over the long run, breakfast has rather large potential for the foremost quick-service Mexican brand.”

According to Nation’s Restaurant News’ most recent Top 100 census, Taco Bell had estimated systemwide sales of $6.8 billion in the United States in fiscal 2009.