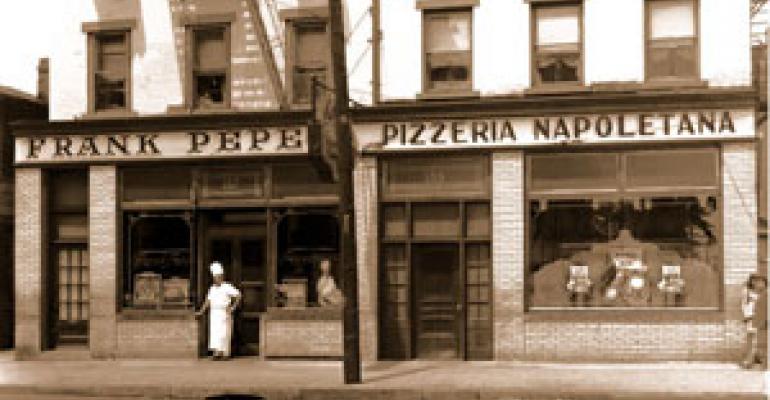 Pizza is the most popular delivery meal in the United States, but one of the first restaurants in the country to serve it actually did so to avoid having to take food to people’s homes.

Italian immigrant Frank Pepe, born in 1893, moved to New Haven, Conn., as a teenager and after the First World War got a job working at the Sargent lock factory.

“He didn’t care for it,” said Francis Rosselli, one of Pepe’s seven grandchildren, all of whom are currently active in the restaurant company’s operation.

So Pepe got a job in a bakery, and in 1925 he and his wife Filomena leased a building with a coal-fired oven and started their own bread-baking business.

“But he couldn’t read or write,” Rosselli said of his grandfather. At that time, bread was delivered to people’s homes, and Pepe had trouble remembering all the addresses he needed to go to.

So instead, he started making food that people would come to his shop to eat.

Burros said that, having been raised on the pizza of Connecticut, she doesn’t bother with the stuff in New York.

“It’s really all about the crust,” she said, noting it has to be paper thin to the very edge, “a chewy, crisp crust and a floury bottom.”

In their book “Roadfood,” Jane and Michael Stern describe the scene at Pepe’s: “Bombs of dough are flattened on a marble table, clouds of spice are strewn in an instant, and six-foot wooden baker’s peels inject pizzas deep into the wood-fired oven. It is a hypnotic scene, untouched by time or fashion.”

But the restaurant has, in fact, evolved.

In 1938 Pepe let his lease lapse and bought a bigger building next door. He applied for a license to sell beer in 1939 and had to convince the authorities that his operation was, indeed, a restaurant, and not a bakery, despite his gigantic bread oven.

“He was one of the first to establish a so-called bakery as a legitimate eatery, where people would sit down,” Rosselli said.

Pepe left the business to his two daughters, Elizabeth and Serafina — he had no sons — who ran the restaurant for several decades. In 1981, they bought the original building that their father had leased, where the original oven was still in place.

That building, known as The Spot, is open when extra seating is needed — five evenings a week most of the year, seven evenings in the summer.

The sisters passed the business on to their seven children in the mid-1990s, and the next expansion didn’t come until a decade after that.

“We’ve always been courted with possibilities of expanding our business,” Rosselli said. “We realized that we had some potential in terms of the strength of the brand, and we also knew that we were getting a little older. But we’d made the decision that if we were going to expand, we’d need to bring in professional management.”

So in 2005 they hired restaurant veteran Ken Berry, who has been a Roy Rogers franchisee and an independent operator.

He moved fairly quickly. In 2006 the family opened its second unit, in Fairfield, Conn. A third unit opened, in Manchester, Conn., in 2007, and last year locations opened in Yonkers, N.Y., and at the Mohegan Sun resort and casino in Mashantuckett, Conn.

Burros expressed despair that a Connecticut icon was expanding, but, although not providing details, Berry says his new customers aren’t complaining.