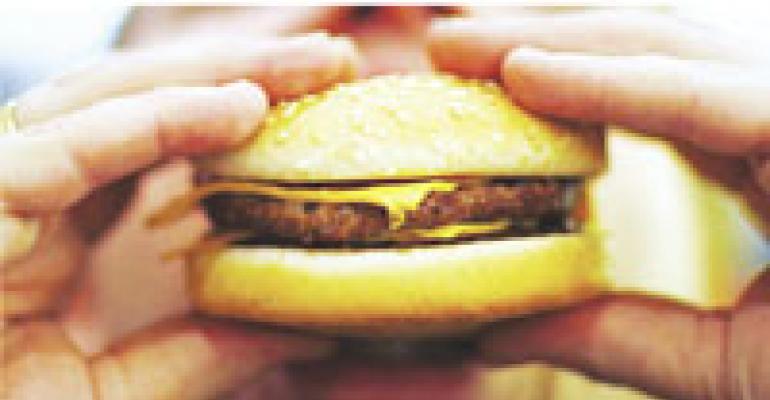 Julia Child, the grande dame of American gastronomy, often would vent her frustration at those individuals who demonized ingredients like butter, cream and salt, claiming that they led to health problems.

“Everybody is overreacting,” Child told a New York Times reporter back in 1989. “If fear of food continues, it will be the death of gastronomy in the United States.”

A year later, she was still fighting the same battle.

“We must be able to make some sense out of the health issues so that people can calm down and enjoy food again,” she advised a crowd of chefs, restaurant owners and connoisseurs at the Food & Wine Classic in Aspen, Colo.

An inspiration to several generations of American chefs and restaurateurs, Child remained a force for moderation in all things culinary until her death in 2004 at the age of 92. But in spite of her decades-long support, the restaurant and food industries find themselves under even more intense fire these days from critics who assail them not only for the food they prepare and sell, but also for what some critics claim is their culpability in making the United States an unhealthier place in which to live.

“The nation is intensely concerned about the obesity problem and poor nutrition in general,” said Dr. Kelly Brownell, director of the Rudd Center for food policy and obesity at Yale University in New Haven, Conn. “When one looks at the obvious places where change could occur, specific items like sugar-sweetened beverages and restaurant foods come into clear focus.”

As obesity rates climb and health and nutrition concerns dominate the headlines, restaurateurs find themselves grappling with a dizzying array of “fear of food” issues, including menu labeling; the reduction of sodium, sugar, fats, trans fats and acryl-amide in foods; alcoholic beverage consumption; sustainability; animal welfare; and food safety and restaurant inspections.

Adding further levels of difficulty to an already challenging environment, some critics and lawmakers insist that the only way to address such issues is through strict legislative or regulatory mandates, arguing that voluntary compliance inevitably fails. In other instances, the restaurant industry has found itself a target of opportunity in the courts and the media, as lawyers and activists charge chain operators like McDonald’s and KFC with contributing to the nation’s health problems by marketing fat-laden food to children and cooking food in trans fats.

While health and nutrition have always played a role in restaurant operations, never before has the industry been called upon to defend itself on as many fronts as it finds itself doing today. The relationship between the American public and the food-service community clearly has undergone significant changes in recent years.

“Who talked about the restaurant industry’s place in the American diet 30 or 40 years ago?” said Dr. Michael Jacobson, executive director of the Washington, D.C.-based Center for Science in the Public Interest. “Nobody paid much attention to it before. But the industry has grown.”

Part of the industry’s problem is of its own making, a number of observers say. Over the years restaurants have gotten much better at giving Americans what they want while exponentially increasing points of sale and customers’ accessibility to food. The foodservice industry’s share of the food dollar nearly doubled between 1955 and 2010, increasing from 25 percent to 49 percent, according to the National Restaurant Association. Meanwhile, restaurant sales exploded from $42.8 billion in 1970 to $580.1 billion in 2010, the NRA says.

“It’s a victim of its own success,” said Rick Van Warner, senior partner with Parquet Public Affairs, an issues management and public-affairs firm in Orlando, Fla.

Today, Americans, who are dining out more than ever before, get at least one-third of all of their calories from restaurant food, Jacobson estimates, up from about 23 percent in the 1970s.

“The industry [in the ‘60s and ‘70s] was so much smaller than it is today, and there were more mom-and-pop-type restaurants,” he said. “It used to be a special treat to eat at a restaurant, and most people didn’t go very frequently. Now it’s a way of life. We’re more reliant on restaurant food. It’s become part of the culture.”

These days, he continued, the industry is dominated by large chains and corporations that are concerned with upholding a sunny public image, which makes them easier targets for activists looking to broadcast their message with the maximum amount of media bang.

“There was no leverage in going after Joe’s Diner,” added Jacobson, whose group once famously characterized a popular chain entrée as “a heart attack on a plate.” It was a sound bite heard around the world.

Nutrition activist groups like CSPI have benefited substantially from the rise of the Internet and the public’s seemingly endless appetite for news and information.

“The Internet has given activist groups the ability to organize and communicate in ways they didn’t have before,” said Rick Berman, president of Berman and Co., a Washington, D.C.-based research and communication firm with an emphasis on food and beverage issues. “Put those two together, and you have a more powerful adversary with a much richer target environment. You have an entire community that can be networked, and you don’t have to lick stamps or put stuff in envelopes to get international attention.”

It’s also easier for critics to get their message out now that news cycles have gone 24/7, said Scott DeFife, the NRA’s executive vice president of policy and government affairs.

“Stations need to have a constant stream of news about something,” he said. “So every aspect of the [restaurant] industry is getting greater attention.”

As a result, public opinion “is crystallizing much quicker, and then politicians are forced to act on it,” Berman said. “It’s the evolution of public opinion on steroids.”

As our culture has changed, so too have consumers’ attitudes toward the restaurant industry. Americans have come to view large international brands like McDonald’s, Burger King and Pizza Hut as being a part of “American big business,” which instantly makes their motives suspect to some.

“With the economic decline and Enron-type corruption and greed, a lot of Americans tend to look at businesses with suspicion or disdain,” Van Warner said.

Even for the majority of consumers who prefer to view restaurants as benign or even friendly entities, many have come to expect a certain type of behavior from them.

“Customers expect more and different things from the industry,” DeFife said, citing nutrition labeling as an example. “There is a greater desire on the part of the public for more information about what they are consuming.

“They’ve gotten used to it in the packaged-food area. So they naturally have started to wonder about other sources of their meals.”

Some observers debate that point, however, maintaining that the American consumer really hasn’t changed all that much.

In any case, restaurateurs and chefs are reminded daily that Americans are overweight and that they themselves are contributing to what has come to be known as the “obesity crisis.” While diet has long been a concern for many Americans, the obesity argument conveniently gathers several high-profile, nutrition-related issues under a single, powerful banner, effectively fueling them all with an added urgency.

According to government figures, two-thirds of American adults are either overweight or obese, which health advocates say leads to such problems as certain kinds of cancer, heart disease and diabetes. A recent government report said the country is on target to spend $344 billion dollars on obesity-related health care costs by 2018.

Increasingly, nutrition activists are laying the blame at the restaurant industry’s doorstep.

“When people eat outside the home, they tend to eat worse and consume more calories,” said Yale’s Brownell. “They don’t know how many calories there are in the food they’re eating.”

“When [CSPI] first started analyzing the dishes [in the ‘90s], we were flabbergasted by what people were eating,” he said. “Calories, fat and salt all jumped out at you. Some were high in fat and some were low in fat, but everything was loaded with salt. And you had sandwiches with 1,000 calories.”

Critics of the industry often cite serving sizes as being among the chief culprits.

“The portion sizes are too large,” Brownell said. “Large portions and [value] pricing encourages people to eat larger amounts than they need to.”

Marketing for restaurants also factors into the debate, Brownell said.

“Marketing tends to emphasize the worst options,” he said. “I don’t see McDonald’s marketing apple slices or salads as much as they do other items. And much of it is directed at children. It’s easy to see why government officials are concerned.”

Restaurateurs, however, are quick to argue that critics often choose to disregard a critical aspect of the problem—American’s growing sedentary lifestyle.

Certainly, legislation is perceived by many to be a magic-bullet solution to the problems of health and nutrition. Over the past several years, lawmakers have introduced numerous measures at the federal, state and local levels that impact foodservice operations. One of the most dramatic legislative encounters of recent years has been over menu-labeling initiatives. Although the federal government previously exempted the restaurant industry from The Nutrition Labeling and Education Act of 1990, states and municipalities more recently resurrected the issue, forcing the industry to seek a compromise position in the nutrition-labeling provision attached to President Obama’s sprawling health care reform law.

Meanwhile, in municipalities like New York and Los Angeles, growing concerns about food and diet have prompted officials to form food policy task forces to investigate what steps can be taken to address the issue.

The same week the Institute of Medicine reported that most Americans consume dangerous levels of sodium, the National Salt Reduction Initiative—led by the New York City Department of Health and Mental Hygiene in partnership with cities, states and national health organizations—unveiled its proposed targets to guide a voluntary reduction of salt levels in packaged and restaurant foods. Four restaurant chains—Subway, Starbucks, Au Bon Pain and Uno Chicago Grill—were among the companies that responded, vowing to reduce the amount of salt in their menu items.

“Salt is clearly the next battleground,” Jacobson said.

Some observers are quick to note, however, that “the next battleground” is not precisely a new one. Knapp recalls that Hilton Hotels offered a low-salt menu in its restaurants during the 1960s.

In fact, Knapp is skeptical about any “nanny state” legislative solutions to perceived nutrition concerns.

Wherever the truth lies, nutrition and health advocates have zeroed in on the restaurant community and are not about to let it slip quietly into the background again.

“We’re seeing a greater number of advocacy groups with food agendas that are using the obesity crisis for a variety of reasons—animal rights, fast-food-free zones, higher taxes on sugary beverages,” Berman said. “And after sodium, it will be something else.

“As they get larger and more ubiquitous, activist groups need to have continuing agendas. They’re not going to go out of business.”

Clearly, as the battle lines join in these polarizing times, many in the restaurant industry sorely miss Julia Child’s distinctive voice of moderation.

“We should enjoy food and have fun,” Child told The New York Times 20 years ago. “It is one of the simplest and nicest pleasures in life.”

However, most observers would agree that the food and nutrition debate has progressed well beyond extolling the simple pleasures of food, and whether the foodservice industry likes it or not, there is no turning back the clock to more innocent times.

“We’re not going back from here,” Jacobson said. “The restaurant industry will be seen as part of the problem for a long time.”—[email protected]