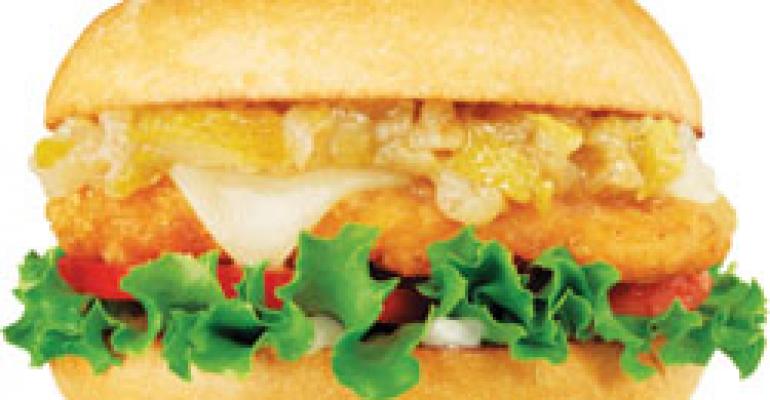 With the economic recovery likely to be slow in 2010, value will be top of mind when consumers decide where and what to eat.

But chefs and trend prognosticators expect longer-term factors to be in play as well. Those include a growing appreciation for all things local—from ingredients to cuisines—the continued need for convenience and, above all, good flavor.

Value—Noting that his segment has benefited from customers trading down, Jeff Harvey, president and chief executive of the Burgerville quick-service chain based in Vancouver, Wash., said, “Guests today are watching their wallets more closely than they ever have before when eating out.”

A National Cattlemen’s Beef Association survey confirms the importance of value. The NCBA asked consumers last July about their priorities when buying food. The number of customers who pointed to value was up by 6 percent compared to May 2007. The International Food Information Council, in a survey conducted in 2009, found 74 percent of customers said price had an impact on their purchasing decisions, and 43 percent said it had a “great impact.”

Jim Doak, director of research and menu development and executive chef of the quick-service chain Culver’s Butter-Burgers and Frozen Custard in Prairie du Sac, Wis., says part of the brand’s product development process now includes designing items that can be delivered in smaller sizes if officials see a demand for it.

Small plates—Value is not the only reason for smaller portions. Kevin Higar, director of operator services for restaurant consulting company Technomic, says the nation’s aging population also is a factor because people eat less as they get older. At the same time, he says, people like to surround themselves with family and friends during these stressful times, and the style of ordering many small shareable items lends itself to that.

Higar also expects to see more flights of small items. Wine flights that allow customers to try multiple varieties have been popular for a while and are becoming more widespread. They are offered on P.F. Chang’s wine list, for example. Beer flights are becoming more widespread, too, and Higar has seen flights of items as unexpected as bacon and pancakes.

Even protein flights are expected to spread. Volt in Frederick, Md., offered a rabbit trio in 2009, for example. And other restaurants have used that strategy to offer value propositions to guests by combining premium cuts of meat—beef filet, for example—with less expensive ones, such as short ribs.

Premium items—During many recessions, consumers who can’t afford big luxuries do treat themselves to small goodies. In response, Doak says, Culver’s this summer is launching premium mixers for its concretes, the chain’s version of milk shakes.

“Before, we were worried about how to execute volatile products like avocado, but now we know we have to do it,” he said, adding that as the Ridgeland, Miss.-based chain expands into the Southwest, he’s looking into more Mexican elements such as chipotle ranch and guacamole cream dressings.

For a growing number of customers, food that seems better for them—whether lower in saturated fat or higher in antioxidants—also qualifies as premium.

Burgerville’s Harvey says premium items are of particular use in QSRs to encourage customers to trade down from pricier concepts. To that end, the chain has expanded its menu to include monthly seasonal premium items. In December those items included a crispy chicken sandwich with Oregon D’Anjou pear chutney and Tillamook Swiss cheese on a toasted Kaiser bun.

Local/regional items—Burgerville has long been a specialist in offering local, seasonal ingredients, particularly in its milk shakes, but taste for local is expanding.

“I think we’re going to spend a lot of time debating the balance of local, seasonal, regional and international,” said restaurant consultant Clark Wolf, adding that the industry moved beyond the “fad” phase of local ingredients, which involved “stunts” like 100-mile dinners in which all food came from within 100 miles.

“Local” gives people a sense that they’re helping their neighbors while providing a sense of security about the origins of their food, Technomic’s Higar said.

Comfort—Regional specialties also are a type of comfort food, another category expected to be popular in 2010. Higar says one way this trend is expressing itself is with breakfast items, which now are being offered throughout the day with increasing frequency. Chicken and waffles enjoyed popularity in 2009, and similar items are likely to pop up on menus in the coming year.

Simplicity—Tying in to the comfort food trend, but also speaking to the maturation of the American palate, many chefs and restaurateurs are seeing a craving for straightforward food. Foodservice research company Mintel predicts “classically simple” dishes with touches of nostalgia to be popular in coming years—classic combinations and little bits of decadence such as bacon, lobster, classic cocktails and doughnut holes.

Culver’s is responding with a chili-cheddar burger currently in test as well as a chicken Cordon Bleu sandwich.

Wade Wiestling, vice president of culinary development at The Oceanaire Seafood Room, based in Minneapolis, says his customers are looking for food that is without pretense but made from excellent products. It also helps if the products are a little bit new, he notes, such as blue king crab.

Convenience—Chefs and consultants expect an explosion in the popularity of food trucks in 2010. Higar says this trend is further fueled by the large number of recently unemployed people who want to be entrepreneurs. “Trucks require less capital” than full-blown restaurants, he says. Twitter allows those trucks to tell customers where they’re parked.

Wolf adds that food also is improving at stadiums and airports and could come soon to a theater near you, which could prove challenging for restaurants that cater to pretheater and preballgame crowds.

Taste—Despite the bad economy, and even as consumers attempt to eat more healthfully and get their food quickly and conveniently, good taste trumps everything.

“What the public is asking for is great flavor and great quality of products and, oh, by the way, it should be healthy for us,” said Stephen Bulgarelli, vice president of research and development at O’Charley’s.

He says the Nashville, Tenn.-based chain is getting away from limited-time offers and focusing on improving its core products. It recently rolled out a newly designed menu.— [email protected]