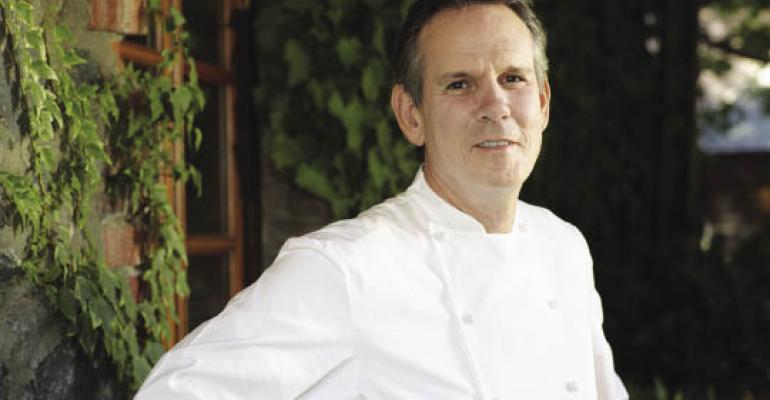 One of Thomas Keller’s favorite axioms is, “Try to do a little better than you did the day before,” and a quick glance at the self-taught chef’s list of achievements would seem to indicate that he probably follows his own advice.

Keller is the only American-born chef-restaurateur to have earned two three-star ratings — for The French Laundry and Per Se — from the Michelin Guide. He was named Best Chef in the United States by the James Beard Foundation in 1997, and 10 years later was honored again with the foundation’s Outstanding Restaurateur Award. Many critics call The French Laundry in Yountville, Calif., the best restaurant in the United States, while The New York Times recently said Per Se was the best in New York.

Keller has opened nearly a dozen restaurants and bakeries, penned several cookbooks, designed dinnerware, produced his own private-label wine and even consulted on two first-run films — Adam Sandler’s “Spanglish” and the animated “Ratatouille.”

And, just incidentally, many would add, Keller also raised the level of American gastronomy, elevating the luxury dining experience through a finely tuned balance of culinary excellence and meticulous service.

“I would say that Thomas is the most important American chef of the last 25 years,” said John Mariani, food and travel correspondent for Esquire magazine. “While he has followed French classic lines, in some respect he created a new cuisine — American haute cuisine — and the ramifications have been global.

“If you were to ask gastronomes in Europe to name one American chef,” Mariani said, “they would likely say Thomas Keller.”

“Dining at The French Laundry is an amazing multicourse experience,” said Tim Zagat, co-founder and chief executive of the Zagat Survey. “It’s a total experience. A lot of people would agree that he is the No. 1 American chef.”

While Keller never attended culinary school, he got an early start in the business, first washing dishes and then later cooking at a Palm Beach, Fla., restaurant managed by his mother. Later, he took a job working for chef Roland Henin at The Dunes Club in Narragansett, R.I. Henin, who today is corporate chef for the Delaware North Cos., said he initially gave Keller the job of preparing meals for the staff.

“A lot of the staff were sons and daughters of our members, and they used to always bitch about the food,” Henin recalled. “Thomas took over, and within four or five days the complaints had stopped. How did he do it? He did it with care and attention. His food was meticulous. He cooked with feeling. And he loved what he was doing.”

As a result, Henin offered Keller the job of night saucier, where he introduced him to the fundamentals of classic cooking.

“That was the moment when I really became serious about cooking,” Keller said. “[Henin] showed me how really good cooks work … and how it’s also their job to nurture people.”

Following that, Keller worked at operations in Florida and New York State, eventually moving to Paris, where he served as a “stagiare” at various Michelin-starred restaurants, including Taillevent and Guy Savoy. Returning to New York in 1984, he attracted critical attention as chef de cuisine at La Reserve and then opened Rakel with restaurateur Serge Raoul. Good reviews notwithstanding, the restaurant was sidelined by the recession, and Keller moved to the West Coast to become executive chef at Checkers Hotel in Los Angeles. That endeavor didn’t succeed, either.

Despite the two unsuccessful bids, Keller and a group of partners forged ahead with the purchase of The French Laundry in 1994. His intention was to create a three-star country French restaurant in the wine-rich Napa Valley, and with the opening of The French Laundry, Keller indeed hit his stride. The awards began accumulating.

“There was just an incredible change in his performance,” Zagat observed.

In the ensuing years Keller opened Ad Hoc, Bouchon and Bouchon Bakery outlets. Then, in 2004 he returned to New York with the opening of Per Se. It  was a critical hit, and reinforced his reputation as one of the country’s most influential and innovative chefs.

Over the years, many have attempted to reproduce Keller’s style of cooking, which he characterizes as an “evolutionary process. The most important decision I made [with The French Laundry] was to change the menu every day.”

Keller maintains that he is not trying to be “too progressive or intellectual with the food. We want it to touch guests inside. Food can be emotional or intellectual — ours is more emotional. We know you love mashed potatoes, but we want ours to be extraordinary. Something you’ve never experienced before.”

“I’ve always viewed the restaurants as sports franchises,” he said. “It’s a true team effort. Even when I was washing dishes in Florida, I realized it was being part of a team. Everyone is relying on you.”

And unlike many of his peers, Keller has shied away from pursuing the celebrity-chef route.

“It didn’t exist when I began cooking,” he said. “So it was never important to me. For me, it’s not about being a celebrity, it’s about being a leader and setting examples.”

However, when asked to assess his impact on contemporary American cuisine, he dismisses the question directly.