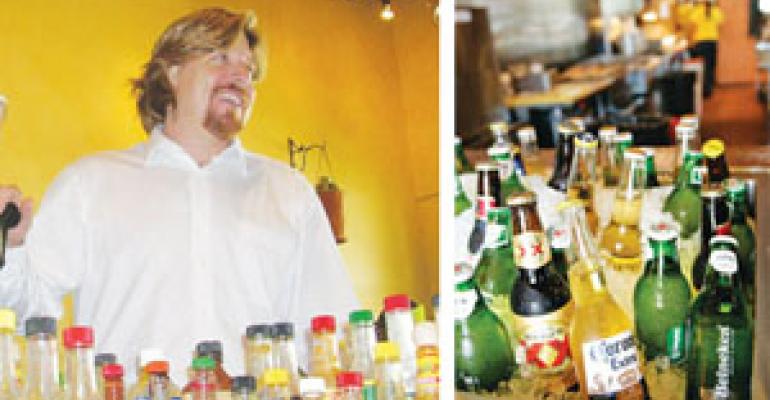 John Kunkel says the fast-casual Lime Fresh Mexican Grill concept he founded has a cult following, not only for its food, but for its frozen sangria, a 16-ounce drink option for $4.95 that pairs well with the spicy menu.

The sangria is an innovative option in the fast-casual world, where an increasing number of concepts are building their beverage menu with beer, wine and even a range of liquors.

Offering alcohol service further blurs the line that separates fast casual from casual dining, and it can have a number of advantages. Among them, alcoholic beverages can appeal to the value-focused diners who have traded down from full-service venues. They also help to boost check averages and can help drive traffic at dinner, typically a more difficult daypart for many fast-casual chains, operators say.

But selling beer, wine or liquor in a counter-service setting is not without its challenges. The permit process for beer-and-wine or liquor licenses can be expensive and slow, depending on the location. And many operators say they have been forced to hire servers to work the floor selling a second drink, as customers are reluctant to return to the counter for another beverage themselves.

For Kunkel, however, whose Five Lime Fresh units are all in Florida, the benefits of selling frozen sangrias, wine-based margaritas and bottled beer have far outweighed the negatives.

About 10 percent of Lime Fresh’s sales come from alcohol, says Kunkel, and, of that, about 2 percent is attributed to the frozen margaritas and sangria. Beer sales make up the remainder—except in the chain’s South Beach location, where Kunkel says he has sold 5,000 cups of sangria so far this year.

“That’s where alcohol sells best within the chain,” he says. “It’s a tourist area.”

Kunkel says sales are brisk in part because the chain displays the frozen drinks prominently at the counter where guests line up to order. Bottled beers are arranged there as well, sitting in big tubs of crushed ice, a tempting offer in South Florida heat.

The chain tried to sell draft beer in the past, but the use of pint glasses just “didn’t work with fast casual,” Kunkel says.

Customers preferred the array of bottled Mexican beers on offer, including Modelo, Pacifica, Corona and Sol.

Staff members are trained to work the dining room, offering a second beer or sangria or even dessert. Kunkel says about 2 percent to 3 percent of sales comes from such follow-up opportunities.

“You have to make it a focus of the front-of-the-house for sure,” Kunkel says.

In suburban locations, white wines made by the California winemaker Barefoot, which come in a screw-top bottle for $3.50, are the top seller among female guests, Kunkel says.

Among the frozen drinks, some locations offer a Long Island Iced Tea—made with agave wine, rather than liquor, to fit within each location’s beer-and-wine license.

In Florida, full liquor licenses are available only through a lottery system or by buying an existing license, which Kunkel estimates would cost as much as $150,000. Add in the additional cost of liability insurance, and “it just doesn’t make sense to do it,” he says—though he wouldn’t rule it out as the company grows to include locations in other states with less burdensome licensing requirements.

Lime Fresh also sees about 60 percent of sales at dinner, and 40 percent at lunch. The average dinner check is about $15 to $17 per person, and Kunkel says alcohol helps nudge that average up, as does the chain’s relaxed atmosphere.

“We’re becoming more of a hang-out destination rather than a grab-and-go one,” he says. “With the interior and the feel of our restaurants, you feel you’re in a full-service destination.”

A recent study by Chicago-based market research firm Mintel indicates that the atmosphere of a restaurant may drive alcohol choices.

Because of the economic downturn, consumers are targeting “fast, affordable restaurants” more often, the study found.

Overall, however, Mintel is forecasting a 2-percent decline in alcohol sales among bars and restaurants across the country as consumers continue to cut back on spending and drink more often at home.

Americans spent an estimated $53.3 billion on alcoholic drinks in restaurants and bars in 2007, up 3 percent from the prior year. In 2008, however, sales began to slow, and spending on such drinks dropped 2.7 percent, according to Mintel.

The decline appears to be slowing, however. Mintel is predicting a rebound in 2010, with sales increasing gradually through 2013 as consumer confidence returns.

Meanwhile, fast-casual operators say their traffic declines have been offset as diners trade down from higher-priced full-service restaurants with bars.

Vapiano, the Germany-based fast-casual Italian concept with six units in the United States, offers a full bar, and the upscale environment encourages diners to stay a while and order a drink or two, says Bill Bessette, chief executive of the chain’s U.S. arm.

At Vapiano, guests receive a smart card when they arrive. To order, they visit various cook stations where “cook-tainers” make their pasta, pizza or salad and swipe their cards. Guests pay as they leave.

Bessette says the bar has evolved at domestic locations to be somewhat different than those in Europe.

In Europe, guests come to the bar, order a drink and bring it to their table. Bars at European locations also have a cappuccino machine and dessert case.

At Vapiano’s U.S. units, the cappuccino machine was moved elsewhere, and stools line the bar for customers to sit with their drinks, if they prefer.

U.S. locations also feature happy hours between 5 p.m. and 8 p.m., and on busy nights servers will roam the dining room with handheld ordering systems to sell a second round of drinks.

As a result, the sale of beer, wine and liquor accounts for about 30 percent of sales at most locations, says Bessette, a ratio more common to high-end full-service dining rather than fast casual.

Vapiano’s U.S. restaurants have an average unit volume of $2.5 million to $3 million within about 5,500 square feet, he says.

Among alcohol options, the top seller at Vapiano is Peroni, an Italian beer, available on draft for $3.95 a glass. Italian wines, ranging in price from $18 to $30 per bottle but also available by the glass, are also popular, says Bessette.

The top-selling cocktail is a martini, available for $8.95.

“We’re not trying to be cutting-edge,” Bessette says.

For Vapiano, getting a full liquor license has been a core part of the “cool, lounge-y” concept, Bessette adds, so locations have been selected based on compatible laws.

In the 20 other countries where Vapiano operates, the concept has morphed into what works for the location. In Europe, the restaurants don’t offer much in the way of cocktails, and in Saudi Arabia, there’s no alcohol at all, “just smoke pipes and coffee,” Bessette says.

At Pizza Fusion, a fast-casual concept based in Ft. Lauderdale, Fla., the beer and wine options must meet the same standards required of the food.

The concept’s menu aims to include organic ingredients without artificial additives or preservatives and to be environmentally sustainable. Beers served by the chain are certified organic and wines are either organic or biodynamic, a designation that refers to a growing method deemed to be in harmony with nature.

All must also meet certain standards for good environmental and social practices, said Ashley Rathgeber, the chain’s director of procurement.

The 22 mostly franchised units across the country can select beer and wines from a preapproved list of vendors, which allows each unit to select locally produced beers or wine.

This fall, however, Pizza Fusion is moving to a core wine list, which will allow the restaurants to develop partnerships with winemakers, Rathgeber said.

Because Pizza Fusion is known for offering an alternative gluten-free pizza, the chain also offers several gluten-free beers—made with sorghum, a grain that tends not to be an allergen. Among the brands are New Grist, produced by Lakefront Brewery based in Milwaukee, and Greens Belgian-style beers from England.

Some Pizza Fusion locations are hosting special gluten-free nights when Greens beer—typically priced between $8 and $9 per bottle—is available at half price, says Rathgeber.

Beer and wine make up about 10 percent of sales, a number that Rathgeber would like to see increase to 12 percent.

Some stores, such as the one in New Jersey, where liquor licenses are hard to come by, don’t offer alcohol at all, she adds. There, she says, the process for obtaining the license was too difficult and expensive.

Other locations have a full liquor license, but the chain has chosen to stay with beer and wine only.

“There are a few good organic vodkas out there now,” she says. “I might consider that at some point.”

When Jeff Starbeck and his partners, Bob and Bonnie Ray, in 2002 opened the first Sonoma Chicken Coop in San Jose, Calif., they knew they wanted to serve beer and wine because the location is close to a downtown sports arena. But at the time they felt a full liquor license didn’t make sense for the concept. Sonoma Chicken Coop serves rotisserie chicken, pizza, pastas and salads in a fast-casual wine-country-theme setting.

For their second location, however, the partners fell in love with an existing restaurant site in nearby Campbell, Calif., a 17,000-square-foot space with a brewery. The location had a liquor license, so in addition to producing beer that now supplies the chain’s other three restaurants, the Campbell location has a full bar.

Though guests order at the counter throughout the chain, Starbeck has hired cocktail servers to work the floor at the Campbell location only, where alcohol makes up about 23 percent of sales, though it’s mostly draft beer.

That unit averages about $5 million in sales, though the rest of the system boasts an average unit volume of about $4.8 million in locations ranging in size from 4,500 square feet to 8,000 square feet.

Because of the liquor license and the space available, the unit also does a brisk business in catering and banquets—a benefit few fast-casual players can claim, Starbeck notes.

Seeing the Campbell unit’s success with the full bar, the partners obtained liquor licenses for the third and fourth locations as well. A fifth location, which is scheduled to open later this year in San Jose’s airport, will be an express unit with a limited menu.

Future growth will come from franchising. Last year, the brand was acquired by Brand Capital, a private-equity firm affiliated with franchise development firm Fransmart, though Starbeck and his partners still own the first four locations as franchisees.

Starbeck says franchisees will likely go for a beer-and-wine license only, simply because it’s generally easier to obtain, although the franchisors are open to locations with full bars if local laws permit and the franchisees are able to obtain them.

Though liquor is available at most locations, Starbeck says, they don’t promote it—aside from an occasional vodka promotion to draw in younger diners.

“Because we’re known as family fast casual, it’s not a high emphasis,” he says.

Instead, they actively promote their higher-margin house-brewed beers. Recently, the chain launched a “Brew Crew” loyalty club, a “frequent-drinker program” offering points for every dollar spent.

“We signed up 600 people in the first month,” Starbeck says.

The partners have also added plasma televisions to the bar areas and have worked on staff training to sell a second round of drinks.

“It’s taken us four years to figure out what will work,” he says. “But alcohol has really helped build incremental sales.”— [email protected]