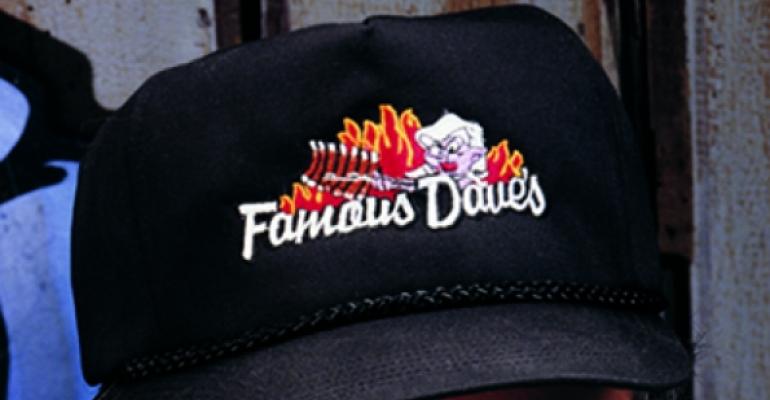 “Famous Dave” Anderson, the founder of the 182-unit Famous Dave’s Legendary Pit Bar-B-Que brand, said the contestants were noticeably nervous and tense during the filming of the first “judges’ table” segment on the Food Network’s barbecue competition show, “Best in Smoke.”

What made this taping different from other competitions like “Top Chef” or “America’s Next Great Restaurant,” Anderson said, was that the chain founder was not seated with the judges but rather stood before them as a contestant.

While celebrity chefs like Bobby Flay and Tom Colicchio and well-known restaurateurs like Chipotle’s Steve Ells and Myriad Restaurant Group’s Drew Nieporent have judged TV cooking competitions, Anderson believes he is one of the first chain founders to compete as an established restaurateur against upstart chefs. He almost got kicked off the first episode of “Best in Smoke,” which debuted May 8 and wraps up this Sunday, before a second-round dish favored by judges kept him around for the next two episodes.

“After the first day, and especially after the first round when I thought I was going home, I said, ‘Man, I just ruined it,’” Anderson said. “I could see the stock price plummeting and all my raving loyal fans being disappointed. I must have been nuts to think I could go on and compete.”

However, Anderson “came roaring back” with a smoked, sliced pork loin dish covered in a blackberry barbecue sauce he improvised for the challenge, and he now is one of three finalists for Sunday’s finale. The sauce from the first episode currently is being featured at all Famous Dave’s restaurants in 37 states, on Blackberry BBQ Ribs or in lettuce wraps.

Anderson competed on “Best in Smoke” on a broken ankle and severely sprained knee he suffered the night before filming started, after falling from atop a customer smoker while trying to attach a flue. He told Nation’s Restaurant News that appearing on the show was worth the pain and tension, because he got to share the story of his life and his brand.

Why did you choose to compete?

I’ve got to be one of the first chain founders or leaders to appear as a competitor. The first thing was, even though my picture is in the restaurants, lots of people can’t believe there’s an actual Famous Dave. A lot of people think it’s a corporate concept created in the boardroom. It was important for me to show that I got my start in the restaurant business … helping my mom set up an Indian fry bread booth at the state fair as a kid and making Indian wild-rice soup. Today in all Famous Dave’s restaurants that soup is one of the most popular soups out there.

The story of Famous Dave’s is that it’s an American dream come true and an against-all-odds story. For me personally, being able to show people in America that there really is a Famous Dave, and that he’s a role model Native American entrepreneur, was important.

Watch a promo commercial for the show.

My ulterior motive was to show people that Famous Dave’s makes everything and all our recipes from scratch. We smoke all our meats in the restaurant, grind the seasonings fresh and hand-rub all our meats. We’re an old-fashioned, down-home concept.

Do those qualities get lost on people?

Even today, I fight being named a restaurant chain. My quick comeback is always that Famous Dave’s is a family of restaurants. Most locations aren’t exactly alike. We have a hard time getting local press sometimes because the news outlets may perceive us to be some chain not worthy of their salt like the hole-in-the-wall barbecue joints.

How does the exposure help your brand?

One of the things about Famous Dave’s is we travel every summer to tons of cook-offs. I’ve been adamant since I founded Famous Dave’s that, unlike any other food grouping, there’s no other category that has more passionate, devoted people that are crazy about their recipes as barbecue. We have something like a NASCAR race team that just competes so that Famous Dave’s remains sharp.

How have the competition and struggles in the casual-dining sector the past few years affected Famous Dave’s?

In March of 2009 when the economy was plummeting, we had our tough times with sales, and the stock was around $2. Then in the last three years, we’ve actually quintupled the stock price, and that’s because people love what we do. Even though we’ve struggled, it’s caused all of us in the industry to get sharp. We’re in a hyper-accelerated marketplace unlike anything we’ve seen before. You could have had concepts around for 50 years and not needed to change, but you won’t see that with new concepts going forward.

I’m very optimistic. We feel we serve America’s food and that it’s more than a special occasion when you go out for barbecue. Analysts would always ask me, does barbecue travel, and they’d insist barbecue is regional. But our No. 1 goal was always great-tasting food, which is why we go everywhere from D.C. to Oregon to Texas. The other part is that the downturn has caused us to have more of an open mind toward what our future prospects look like. At one time, investors would ask us what our footprint looked like, expecting chains to have just a specific one, and today you need to be flexible to the marketplace. We’re going to have to be flexible going forward … and what we’re facing is that people are more cost-conscious. They’re going out, but they’re watching their dollars more, and we think we can make barbecue affordable for them.