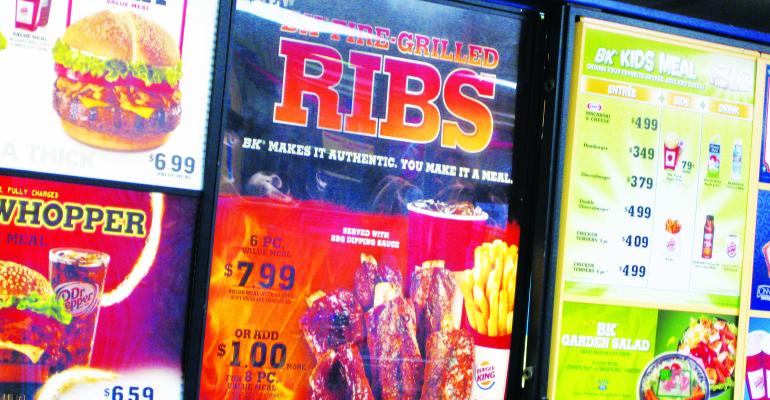 Burger King became the latest quick-service player to edge into casual-dining pricing territory when it began rolling out its Fire-Grilled Ribs eight-piece combo meal for $8.99 in major markets earlier this month.

But while other QSR operators have offered items that are near or exceed $9 — Subway sells its Big Philly Cheese Steak sub for $9.28 in some markets — observers say Burger King’s attempts to establish a broader range of menu prices could result in customer pushback.

“Adding items at this price point is definitely a bold move for Burger King, and would be for any QSR,” said Leslie Kerr, president of the Intellaprice  pricing advisory firm in Boston.

“Burger King is currently promoting $1 menu items and five meals for $5, so introducing $8 and $9 items could send a message that confuses customers or at least create some sticker shock,” Kerr said. “The $9 price point is one that customers typically associate more closely with fast-casual or casual-dining  concepts.”

In an extreme example of “barbell” pricing, with value  items in the dollar range at one end, BK’s limited-time-only bone-in pork rib introduction assumes that at least some of the quick-service chain’s customers are willing to trade up to casual-dining prices for some items.

Customers who purchase a rib meal “will be taking a bit of a step up,” Kerr said. “If customers frequenting Burger King for its core items happen to have a hankering for ribs and don’t mind spending additional money, then they might not balk at the price.”

To help address the pricing differential and convince patrons to try the ribs, Burger King in some markets is inviting them to purchase three ribs together with a burger value menu for an additional $1.99.

However, BK’s decision to push the pricing envelope with some costlier menu items also may reflect a wider trend emerging in the quick-service sector. Researchers say that as the nation begins to rebound from the economic downturn, restaurants will be introducing premium-priced products more frequently to divert customers’ attention away from steep discounts that helped keep traffic and sales on life support during the recession.

Bonnie Riggs, restaurant analyst at The NPD Group in Chicago and author of the just-released study, “Light at the End of the Tunnel … What Can We Expect,” said consumers like to try new things, and operators “hope by offering up those more premium products that they will get consumers’ minds off the dollar-menu items and those kinds of things.”

Burger King’s new Flame-Grilled Ribs, which use the new batch broilers that are now in nearly all domestic units, top out at the $8.99 price for a combo meal, which includes eight ribs, French fries and a drink.

While the price for an eight-piece rib combo meal remains steady at $8.99 across the country, BK franchisees apparently have been given some latitude on pricing for a six-piece rib combo meal. Prices are $7.99 in Dallas, $7.49 in Chicago and $7.69 at stores in the Phoenix and Salinas, Calif., areas. The company said its “value-conscious customers” could have a three-piece ribs order for $2.99, a six-piece for $5.69 or an eight-piece for $7.19.

The combo-meal ticket price nearly rivals some offerings at casual-dining restaurants like Chili’s and Applebee’s, which often start meal options at $9.99. Some casual-dining brands have dropped prices as low as $5.99 for special promotions on burgers, for example.

Kerr cited Intellaprice data that found the average price of a half-rack of ribs at casual-dining chains was $11.68 in 2009, while a riblet basket averaged $8.87. Both meals included side items, she said.

“If customers can get comparable items for a similar price or just a few dollars more in a full-service environment, it could make the sale a bit challenging for Burger King,” Kerr said.

Burger King has reiterated its commitment to a variety of price points, especially since it still faces a lawsuit by franchisees who claimed a $1 double cheeseburger promotion last year forced them to lose money. That value meal product was reformulated this year as the BK Dollar Double, which included two beef patties and one slice of cheese.

In February, John W. Chidsey, chief executive of Burger King Corp., told analysts the company wanted to provide “extreme affordability” with value promotions. He added that the chain “will balance those offerings with a strong, indulgent product pipeline that includes Steakhouse XT, ribs, stuffed burgers, chicken LTOs and others.”

But observers note that those two messages can run at odds.

Kerr said Burger King has worked to solidify its value-oriented position, and premium-priced items can erode that carefully crafted image.

“Inherent in the QSR segment is a certain price tiering, and customers are accustomed to certain price points in each segment of the industry, from QSR to casual to fine dining,” she said.

“Pricing is one piece of each concept’s branding, and typically, marketing programs seek to maintain consistent brand positioning,” Kerr said. “The upside, if Burger King can gain traction with ribs, is the customer trade-up.”

John Schaufelberger, Burger King’s senior vice president for global product marketing and innovation, said in a statement, “Our guests’ initial reaction to this product has exceeded our expectations, further validating the Burger King system’s investment in our new game-changing broiler.

“Because of this proprietary cooking technology,” Schaufelberger continued, “we’ve been able to up the ante in our product development across the board, and BK Fire-Grilled Ribs are just the beginning of the innovative product line we can offer with this new cooking platform.”

The company said marketing support for the ribs rollout includes in-restaurant merchandising and national TV advertising that plays off the adage, “when pigs fly.” The 30-second television commercial shows a pig with wings trying to convince a skeptical guest that Burger King restaurants are now home to bone-in ribs.