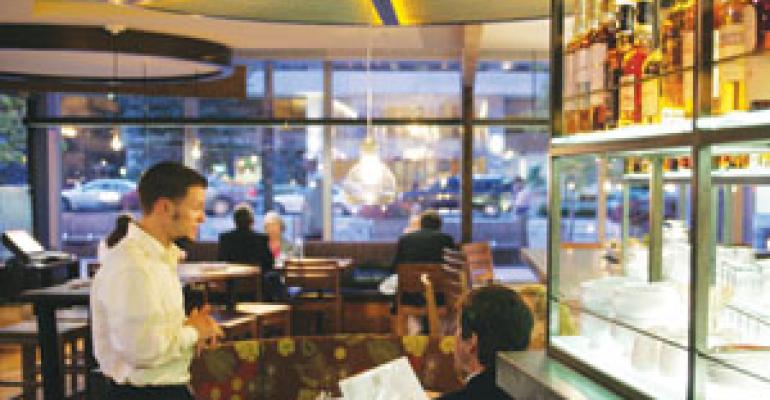 Energy conservation has been discussed in America at least since the oil crises of the 1970s, and energy-efficient restaurant equipment perhaps nearly as long.

But for many restaurant operators, it was last year’s spiking oil prices and resultant hikes in a wide range of commodities that turned good intentions into action. Although energy prices have moderated of late, the need to reform energy usage remains acute, especially in light of the threat of global warming as a result of fossil fuel dependence.

To get a handle on energy costs, a growing number of restaurant operators are ramping up their conservation practices and choosing more efficient kitchen equipment. Some are realizing added customer goodwill as well as lower operating costs in the bargain.

“Since going green can often save money for businesses, we expect to see ever-increasing interest in sustainability efforts this year and beyond,” Chris Moyer, project manager of the National Restaurant Association’s Conserve environmental initiative, says in an e-mailed statement.

Yum also reported that Taco Bell saves more than 30,000 kilowatt hours of electricity annually per restaurant and conserves about 300 million gallons of water systemwide with the Grilled to Order cooking system that it introduced last year. For its part, Pizza Hut is installing high-efficiency, Energy Star-rated fryers in its WingStreet restaurants and has a new pizza oven with an energy-management system that reduces gas usage up to 15 percent.

A full slate of energy-efficient equipment and conservation measures are in place at Founding Farmers, an eco-friendly restaurant in Washington, D.C., that is owned by the Jamestown, N.D.-based North Dakota Farmers Union and operated by Vucurevich Simons Advisory Group, a foodservice consulting and development company based in Kensington, Md.

“We went after some of the big hogs,” says Lara Hardcastle, Founding Farmers project manager and a VSAG vice president. “Dish machines are big, steamers are big.”

The months-old restaurant has a number of pieces that are Energy Star-rated for energy efficiency, including a large conveyor dish machine, an undercounter glass washer at the bar, steamers, freezers and fryers.

“Our electric bill has consistently come in far lower than what we originally projected, based on a similarly sized restaurant in the D.C. area,” Hardcastle says. “So I feel we have realized some energy savings, although exactly how much is difficult to quantify now.”

For help with energy issues, operators turn to several sources, including consultants, vendors, utility companies and industry groups. Moyer notes that the website, which the NRA launched last May, is receiving “very positive feedback” about its low-cost and no-cost suggestions for going green as well free webinars on energy- and water-saving measures.

“We are fortunate to have very strong relationships with the utilities in most of our areas,” says director of facilities Dan Milojevich. “We go to them with suggestions, and sometimes they bring opportunities to us.”

Last year, El Pollo Loco received a Southern California Gas Co. award for energy efficiency excellence for reducing its annual natural gas consumption by 9,700 therms. The chain also pocketed more than $13,000 in financial incentives from the gas company to offset the cost of upgrading fryers and ovens in 11 of its units, which were said to save the company about $5,000 in energy costs.

Mindful that kitchen ventilation is one of the largest energy users in a commercial kitchen, El Pollo Loco is testing a demand ventilation control system. It varies the speed of the fan in the kitchen hood to match the level of cooking emissions that need to be exhausted, rather than running the fan constantly at full speed as restaurants customarily have done.

“It’s unclear yet whether this will be feasible in a kitchen with a smaller footprint like ours, because there are substantial up-front costs and a long payback time,” Milojevich says. “But in certain industry segments, like large hotel kitchens, it would be a slam dunk.”

Another approach to energy-efficient ventilation is used at an ecologically advanced Chipotle Mexican Grill restaurant in Gurnee, Ill., part of the Denver-based fast-casual chain of more than 800 units. It has a ventilation hood that creates an air curtain in its immediate footprint, capturing not only cooking grease and particulates but also the heat that escapes from a conventional hood, says Chipotle spokesman Chris Arnold. That reduces the overall heat load and in turn the amount of energy needed to condition that air.

However, the unit’s most visible sign of green commitment is a 60-foot-tall wind turbine on the roof, which is designed to generate about 10 percent of the unit’s electrical power. Inside, there is a bevy of Energy Star equipment, including upright and undercounter refrigeration, an ice machine, a fryer and undercounter food warmers.

“This restaurant is where we put all these different things together in one place,” Arnold says. “We’re confident it will pay benefits in terms of reducing operating costs.”

For David Friedman, owner-operator of Epic Burger, a Chicago quick-service eatery that favors all-natural beef, nonpetroleum-based packaging, recycling and Energy Star refrigeration equipment, being green is worth a few points with customers as well as dollars off on utilities.

“I do think it is probably saving me on some of my utility bills,” Friedman says of the equipment.

The green consciousness also attracts a certain customer, he notes.

“I get people who might not otherwise visit me because of that, or who become aware of me because of that,” he says, “but I just sleep better because I do business this way. I think it’s the future. You have to jump on the train sooner or later.”