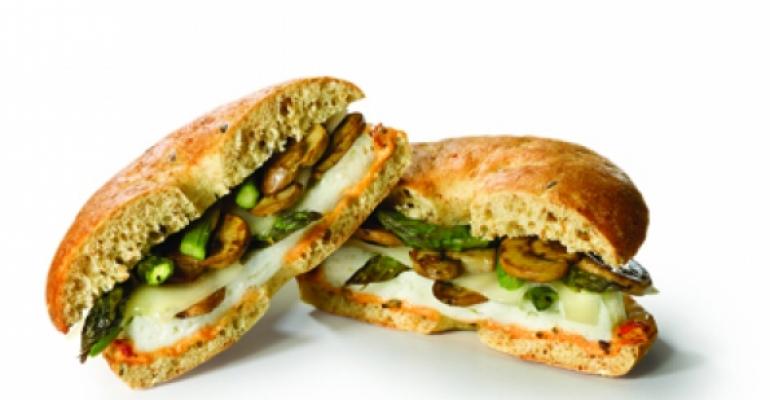 Einstein Bros. Bagels has rolled out a new “Smart Choices” menu featuring 14 items that each have less than 350 calories, the company said Monday.

The move is part of an ongoing strategy to position Einstein Bros. as a better-for-you bagel brand, as well as to build the chain’s growing catering business.

The Smart Choices line includes seven existing menu items and seven new options, several of which were in restaurants at the beginning of April with the rollout of a new overall menu. The more healthful options are highlighted on a separate menu panel to make them easier to find, said Richard Burjaw, Einstein’s marketing consultant.

The menu also aims to capitalize on the success of the company’s Bagel Thin platform, a line of slimmer bagels introduced in 2010 that appeals to the carb-averse and calorie counters who want the taste of a bagel with less bread.

“Our Bagel Thin sandwiches have been a popular choice for our loyal guests, so it was a logical next step to develop a menu specifically geared toward consumers looking for ways to enjoy our bagels in a lighter way,” said Jeff O’Neill, chief executive for Einstein Bros.’ parent company Einstein Noah Restaurant Group.

Also among Smart Choices options are two salads: Chipotle Chicken or Harvest Chicken. Other items include soups, fresh fruit and yogurt parfaits, as well as smoothies, including Strawberry Banana or Ultimate Blueberry.

In addition to being lower in calorie, all Smart Choices options have less than 15 grams of fat and are priced at $5.50 or less.

The menu is available at Einstein’s 631 locations, as well as 70 units of sister brand Noah’s New York Bagels.

Einstein Noah also operates the Manhattan Bagel brand, with 72 locations, but that chain has a separate menu. Burjaw said the company might look at offering the Smart Choices menu there in the future.

In addition to the more healthful offerings, Einstein has been building its specialty coffee platform with espresso, and hot and cold espresso-based drinks.

The new menu in April also includes new beverages, such as a cold Caramel Blender.