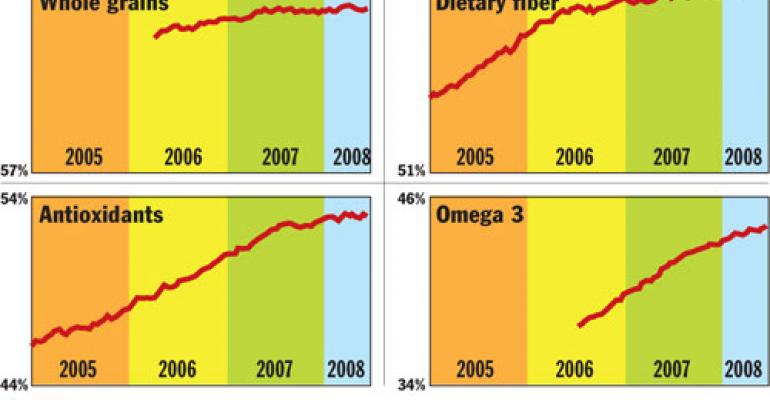 January, the month of New Year’s resolutions, may be over, but the opportunity for restaurant operators to capitalize on dieting consumers is not.

According to new data from market research firm The NPD Group, the dieting season that kicks off Jan. 1, with one out of five adults on some kind of diet, extends beyond Jan. 31. By the end of March, the number of dieting adults has grown to one in four. This year, according to NPD, dieters will not only be looking for more healthful fare and better-for-you versions of their favorite foods, they will be seeking out restaurants that offer such items at a value.

“[Consumers are asking], ‘Can you help me address my need to diet? Can you make it easy and affordable?’” said Harry Balzer, vice president of Port Washington, N.Y.-based NPD. “It poses a big challenge for operators.”

One of the biggest challenges for operators may be that health is a mercurial concept in America. For the current generation, health is about adding beneficial ingredients, not removing harmful substances from diets, NPD found. The percentage of adults seeking to add more healthful ingredients, such as whole grains, dietary fiber, antioxidants and Omega-3 fatty acids, to their diet has been on the rise since 2005.

In contrast, the percentage of consumers trying to eliminate trans fats, cholesterol, sodium, caffeine, sugar and carbohydrates has declined drastically since it peaked in the late 1980s and early 1990s, NPD found.

Consumption of low-sodium products also is on the rise. In the year ended February 2008, 38 percent of those surveyed said they still checked nutrition labels for sodium content, NPD found. During the same period, the percentage of annual eatings per person of products with a low-sodium or low-salt label increased to almost 50 percent.

Given the correlation between sodium and health risks such as heart disease, many quick-service chains already take sodium reduction with more than a grain of salt. In recent months, Yum! Brands Inc.’s KFC, Pizza Hut and Taco Bell, as well as Burger King and Au Bon Pain all have announced that they are looking at ways to reduce sodium levels in their foods.

Consumers use all manner of tactics to control their weight, but the most popular diet is one that consumers have made up themselves, NPD found. In 2007, the top five diets were described as “my own diet,” “diet prescribed by a doctor,” “Weight Watchers,” “low-calorie diet” and “low-fat diet.” Other popular diets included “appetite suppressants,” “sugar-free diet,” “Atkins,” “South Beach diet” and “low-sodium diet.”

Another constant is calorie control, NPD found. While the easiest way for operators to help dieters reduce calories is through portion control, the problem, say industry experts, is that consumers’ perception of value at a restaurant is still directly related to the amount of food served.

“The issue has always been about calories,” Balzer said, noting that operators could benefit if they could figure out how to sell lower-calorie items in a profitable way.

While consumers are watching their waistlines, they still want to eat foods they like. Despite the lengthy diet season, the No. 1 foods in America still are carbonated soft drinks, French fries and hamburgers, according to NPD data.

“I don’t think we’re as concerned about our weight,” Balzer said. “I think it’s more about eating better-for-you versions of our favorite foods. Consumers will be asking operators to give [them] the healthful version of what [they] like to eat.”

Operators have been trying to increase the healthfulness of their most popular offerings for years. Some efforts like the McDonald’s Snack Wrap, a downsized version of the chain’s classic chicken sandwich, served in a tortilla, have been hugely successful. Many others have failed, often because they just didn’t taste good, experts say.

“I think we’ve got to operate from the notion that taste is king,” said Hope Warshaw, author of such healthful-dining books as “Eat Out, Eat Right: The Guide to Healthier Eating Out” and “The Guide to Healthier Fast Food Eating.” “Making healthier items as tasty as possible and promoting them is a good idea [for operators].”

Good taste has been the recipe for success for healthful fare at Pizzeria Uno. The Boston-based pizza chain has scored points with diners with more healthful versions of its pizzas and entrées for years now, despite doing little to tout them.

“We are not in the lifestyle-managing business, but nonetheless want to give our customers choices,” said Rick Hendrie, senior vice president of marketing at Uno. “You can indulge or be more careful. We don’t call it out as healthy on the menu.”

Hendrie, who said that over the years the chain has seen a modest shift toward consumers eating lighter fare, attributes the success of more healthful menu items such as flatbread pizzas and multigrain pasta to the fact that they taste good.

“First and foremost, we’re a company about flavor,” Hendrie said.

Also concerned with meeting consumers’ desire for good-tasting healthful options is Chili’s Grill & Bar. The chain first introduced its Guiltless Grill menu in 1993 but has updated it multiple times. The menu received its most dramatic update in mid-January, and now all featured items, including fare such as Carne Asada Steak, Cedar Plank Tilapia and Buffalo Grilled Chicken, have fewer than 750 calories, 25 grams of fat and 8 grams of saturated fat.

“Our culinary team felt the need to keep the Guiltless items relevant, while adding more and unique flavorful options for our guests,” said Cammie Spillyards, director of culinary development for Chili’s.

Other operators also are trying to appeal to health-conscious consumers with tasty versions of favorite food and beverages. For example, in late 2008, SushiSamba, a New York-based, multiunit concept serving Japanese, Brazilian and Peruvian cuisine, launched a menu of virgin, health-oriented cocktails.

“While the rise of artisanal cocktails has made a splash in the past year, health-conscious, affordable cocktails that combine fresh ingredients are growing in popularity,” said Joanna Cisowski, SushiSamba’s director of public relations. “SushiSamba launched its virgin cocktail program to provide something often overlooked in health-conscious dining: tasty cocktails.”

SushiSamba’s new menu includes so-called “mocktails,” such as the Açai Fizz with açai, passion fruit, mango and egg white; and the Coco Leite with coconut milk, pineapple and mango. Already helping to drive traffic, the virgin menu will be available throughout 2009, Cisowski said.

“Many times we try to sell health as a value-added,” Balzer said. “I think that’s a downfall.”

Further, just because operators view a menu change as more healthful for consumers, doesn’t mean it will be better for business, Balzer pointed out.