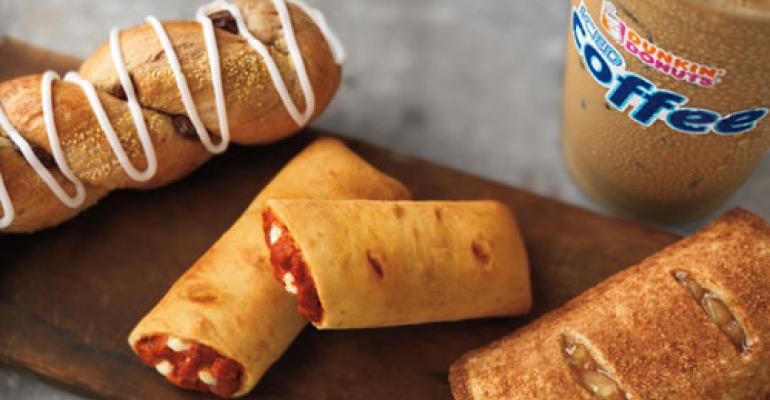 Dunkin’ Donuts introduced Monday a line of snacks priced under $2 each in a move to boost sales in the between-meal dayparts.

The “Hearty Snacks” include two varieties of stuffed breadsticks — cheeseburger, and pepperoni and cheese — for a suggested $1.59, and an apple pie for $1.29. Also on the menu are the chain’s bagel twists, available in cheddar cheese or cinnamon raisin, for $1.39 each.

The stuffed breadsticks, made with pizza dough, are a new item for the 9,700-unit chain. The apple pie was available last fall in the Northeast, but this is the first time it is available nationally, a company spokeswoman said.

Consumer research firm The NPD Group has attributed about 40 percent of restaurant sales growth in the past five years to snack dayparts. The rest of the growth has been at breakfast.

Dunkin’ Brands indicated in a press release that the new line was launched in response to consumer feedback.

“Our guests have told us they seek fast, fresh and satisfying snacks that can be enjoyed any time of day, with no compromise on taste or quality. With our new ‘Hearty Snacks,’ we continue to expand our all-day menu to offer more and more choices at a great value that meet the needs of our guests' busy, on-the-go lifestyles," said John Costello, chief global customer and marketing officer for Canton, Mass.-based Dunkin’ Brands.

Several of Dunkin’ Donuts’ competitors also are after snack sales, including Starbucks, which last month launched a Petites line of mini desserts under 200 calories each. Meanwhile, McDonald’s has expanded its Snack Wrap offerings beyond chicken, as with its Angus Snack Wraps, and Au Bon Pain offers several small plates under its Portions line.