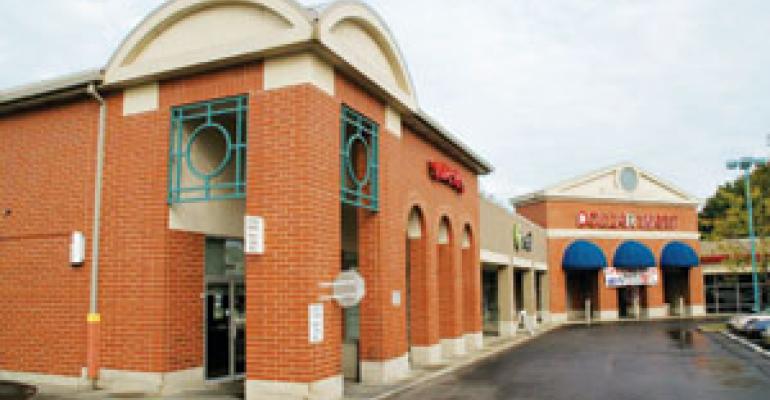 Like plain Janes that blossom into raving beauties, strip center end-cap sites are looking increasingly good to chains like Popeyes and Wienerschnitzel that are blazing new paths to drive-thru operations in suburban strip malls.

The weak economy’s squeeze on commercial property, especially shuttered bank branches that already have drive-thrus, is helping make end caps among the most coveted and cost-effective sites in foodservice. Build-to-suit strip centers also are adding drive-thrus at the behest of chains opting away from costlier free-standing locations.

“In a slow-growing foodservice environment weakened all the more by our economic troubles, end caps have become a very viable alternative for small and moderate-sized chains to get good locations,” said Paul Fetscher, principal of the Great American Brokerage in Long Beach, N.Y. “The low-hanging fruit had been shuttered free-standers. But most of those have been picked through.

“End caps in a strip center or lifestyle center become a cost-effective way to get prominent exposure with your real estate.”

Fast-casual and fast-food players, in particular, are among those operators being drawn to end caps by dint of their store formats, including non-drive-thru concepts.

The Newport Beach, Calif.-based chain spends about $500,000 for such a site, versus $1 million or more for a traditional free-standing location. End caps are built-to-suit turnkey deals, Tase indicated, meaning Wienerschnitzel only has to finish the interiors and install equipment.

The end-cap locations give the impression of being freestanding by allowing the space to show off the brand’s distinctive exterior design, which often features huge murals of pandas at play, stylized logo lettering, festive canopies for outdoor dining and Asian-accented towers, Landsberg said.

Popeyes Louisiana Kitchen, the 2,000-unit chain formerly known as Popeyes Chicken and Biscuits, is using end caps to roll out its “Heritage” prototype, said Greg Vojnovic, vice president of development for Atlanta-based parent AFC Enterprises. The locations also serve as training centers for new franchisees. About 15 percent of the chain’s outlets are in end caps, and the number is growing, he said.

Ken Reimer, founder of Baker Bros. American Deli, a 16-unit fast-casual chain based in Dallas, zeroes in on end caps as a more cost-effective way to grow. Today, only two outlets are not corner spots on strip centers, said Reimer. With 27 new franchised stores about to open, Reimer said, only a few may not be located in end caps.

Fetscher noted that end caps allow operators to design locations that give the illusion of being free-standing by, in the case of hotels or office buildings, constructing an entrance 100 feet or more from the building itself.

Reimer of Baker Bros. recalled participating on a MUFSO panel in the early 1990s in which strip-center end caps were considered “nontraditional locations” in league with gas stations, hospitals, business towers or cruise ships.

“Nobody uses that term anymore to describe them,” Reimer said, “especially when it comes to end caps. In fact, in my original business plan for Baker Bros., I told our investors that to maximize our return on investment, end caps are the only way to go.”

Noting that the average unit volume for Baker Bros. is about $26,000 a week and that his end cap leases range from as low as $28 a square foot to as much as $40 a square foot, Reimer said end caps are the next best thing to a freestanding restaurant.

Avoid strip centers with big grocery stores; parents are far less likely to buy a burger for Little Johnny if they’ve just purchased $100 worth of groceries, especially freezer foods and other perishables.

Vojnovic of Popeyes said the standing strategic real estate goal for the chain is that every unit is a stand-alone with a drive-thru. But an end cap is the next best thing, he said.

At Popeyes, where end caps are still classified as nontraditional locations, Vojnovic said the company has been most aggressive about acquiring abandoned banks on the outside lot of inline strips despite some of the unexpected problems and expenses retrofitting banks.

“We are converting banks as fast as possible,” he said. “We’re converting one in Richmond, Va., right now. But the problem with many of them is getting rid of that vault. You have no idea how difficult it is to get rid of the vault.

“The other thing with banks is that they tend to have nowhere near the amplitude we need to run our stores, no gas lines and no venting. Why would they? But we are making them work when we get our hands on them.”

Fetscher noted that even though many bank units have closed, they are still paying above-market-rate rents on empty spaces and will often work out deals with foodservice operators to sublease and finance as much as half of a restaurant’s monthly rent.

Krolick of Stevi B’s said he competes against a few brands, such as Rotelli’s Pizza and Pasta, that prefer locations in the centers of in-line strips or the middle of L-shaped malls.

“But for us, the best visibility at the right price is the end cap,” he said. “The other thing about an end cap is that it eases the operation’s access to utilities, garbage collection and deliveries without getting in the way of customer flow or shoppers.”

Many veterans say the economy has put operators in control of lease negotiations, often yielding below-market leases and other build-out or preopening expenses the landlord is willing to pay for. But Panda Express’ Landsberg said the economy is not influencing his aggressive pursuit of end caps.

“End caps are a good growth vehicle in any economy,” he said. “We have grown in end caps for 10 years, and they are our primary growth vehicle, even though we have the flexibility to do food courts and freestanding drive-thrus.”