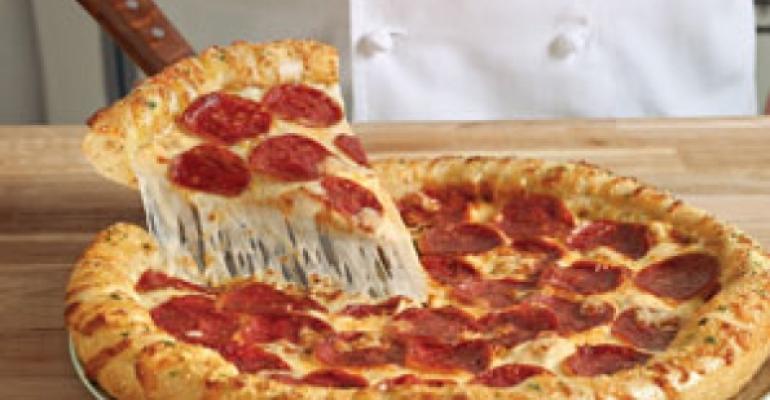 In a conference call Tuesday discussing the company's latest results, president and chief executive J. Patrick Doyle said that while traffic in the first quarter was driven by customers interested in trying Domino's new pizza, continued sales momentum in the second quarter indicated that that they liked what they had tried and were ordering more often.

"Our strong sales momentum in the U.S. is evidence of the success of our improved pizza and focus on operations," Doyle said in a statement. "The increased sales were not just driven by trial, but by repeat orders from our new larger customer base."

Doyle said in the call with investors that Domino's check averages were down slightly, but that the pricing structure introduced seven months ago of two medium pizzas with two toppings for $5.99 was appropriate for the current economic times. He added that the company had no plans for a price increase anytime soon.

“We haven’t changed it for a reason,” he said of the price, adding that consumers “are still hurting.”

Domino's international same-store sales were up 6.2 percent, the 66th consecutive quarter of sales growth in that category, and global sales overall were up by 12.5 percent. Excluding currency fluctuations, Domino’s global sales would have been up by 10.3 percent, the company said.

Domino's opened 62 restaurants internationally. Domestically, 21 stores opened and 22 closed, which was close to the company’s goal of net flat domestic unit growth for all of 2010.

“I really like where we are overall as a global brand,” Doyle said, adding that the company had a new master franchisee in Poland and that four new markets would be announced later this year.

He said overseas performance was achieved mostly without the new pizza formulation, which is being tested in some markets but has not been rolled out, except in Australia, which was using the new sauce but not the garlic oil crust. Domino’s restaurants in Australia only serve pan pizza.

Although the cheese had also been reformulated domestically, the cheese overseas was already different from that of the U.S. market and would not be changed, Domino's said.

Doyle said Domino's domestic performance was benefiting from the foundation the company had been laying over the past two years that included adding new menu items and improving marketing. He said the advertising budget was “flush” at 5.5 percent of sales.

Doyle said that online ordering, which was made available to customers about three years ago, accounted for between 20 percent and 25 percent of total sales in the second quarter, about the same as during the first quarter. He said that the second quarter generally saw a lull in the increase of online ordering, which he speculated was a result of college students, who are heavy Internet users, going home for the summer.

He said the dinner daypart had improved over a year ago, but noted that dinner had been a “real weak spot” in 2009.

Domino’s said it repurchased $20.4 million of its debt in the second quarter, following a $10 million repurchase in the first quarter.