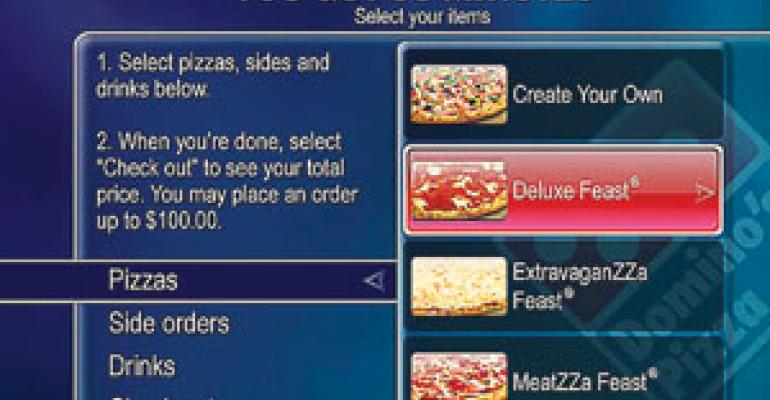 TiVo users who see a commercial for Domino’s can click “I want it” through their remote control devices to place orders and can expect delivery in about 30 minutes, said Rob Weisberg, vice president of precision and print marketing for Domino’s. Only TiVo users with broadband Internet access, who account for about 850,000 households, can use the new ordering gateway, he said. —

“This is the first time in history that the ‘on-demand’ generation will be able to fully experience ‘couch commerce’ by ordering pizza directly through their television set,” Weisberg said. —

Domino’s officials declined to discuss initial results tied to the new strategy, in terms of added sales or the number of orders placed through the alternative channel. The pizza chain’s TiVo deal comes at a time when competitors on all sides are trumpeting new ordering channels via social-networking sites, a la Pizza Hut and its interface, and heightened mobile marketing, such as Papa John’s Pizza’s use of camera-phone-triggered 2-D bar codes to pull consumers to its mobile-Web-ordering page. —

Orders placed using TiVo ultimately move across Domino’s online-ordering system, which is integrated with the store-level point-of-sale systems in nearly all of the chain’s approximately 5,000 U.S. locations. Weisberg said Domino’s operators must use the chain’s proprietary Pulse point-of-sale system to take part in the TiVo initiative, but he added that, as of today, “nearly 100 percent” of the system runs that technology. TiVo users also can access Domino’s Web-based Pizza Tracker for a graphical peek at the progress of their pies from the time they place an order until the food is handed off for delivery, he said. —

TiVo subscribers can order Domino’s fare from several entry points on the TiVo user interface, including the areas labeled, “Gold Star Sponsorship,” “Program Placement,” “Interactive Tags” in live-TV spots and through “Music, Photos, Products & More.” Once within one of those on-screen areas, they click on “Order Your Domino’s Pizza Now.” —

Using the TiVo remote, consumers can customize their orders and enter their addresses. To save time, they can set up an account at and use their affiliated account number to quickly log in while navigating TiVo. Weisberg said Domino’s one day hopes to make ordering pizza through TiVo and cable TV a one-click routine, but for now that is not possible. —

“Today, TiVo and cable boxes do not store customer information due to privacy concerns, so customers must log-in or enter their address information to verify their delivery address and identify their local store,” Weisberg said. —

Domino’s is not paying TiVo transaction fees or amounts beyond a “Gold Sponsor” media buy, of an unspecified amount, he said. All of TiVo’s approximately 3.6 million subscribers are exposed to Domino’s commercials, even if only about a quarter can use the online-ordering feature at this time, he pointed out. Weisberg said TiVo is not paying Domino’s any fees, but is featuring the chain in “a number of marketing materials to their customers and prospects.” —

The overall cost of partnering with TiVo, Weisberg said, amounts to “a relatively small percentage of our overall media buy.” —