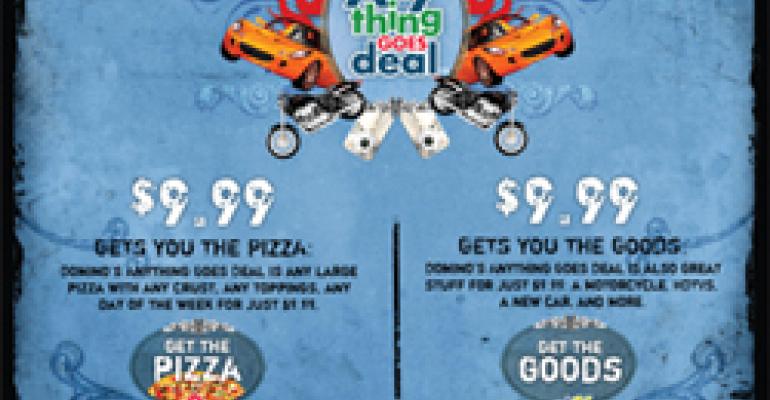 That Domino’s Pizza and Bob Evans Restaurants launched product promotions in January is not particularly earth-shaking news, but the fact that both involved the eBay auction website indicates that restaurant chains have found a way to engage consumers through yet another nontraditional medium.

Domino’s used eBay as a marketing partner for its “Anything Goes Deal,” sponsoring a “treasure hunt” on the site for premium items valued at $250,000. Bob Evans promoted its new Stacked and Stuffed Hotcakes with an eBay charity auction.

By choosing to use eBay, the chains are doing what is becoming increasingly important to marketers in all industries: going where consumers spend a lot of their time, whether it’s on their cell phones, MP3 players or computers.

“Their [eBay’s] customers and ours have similar needs and attitudes,” said Trisha Drueke,Domino’s vice president of brand marketing, research and development. “It was a perfect match.”

The Anything Goes Deal offered any large pizza on any style of crust with any toppings for $9.99. Adding a unique twist to what could have been a standard product promotion, Domino’s set up a special website and posted clues to how consumers could find and buy iPod Nanos, Gibson guitars, Sony flat-screen TVs and other products on eBay for only $9.99.

One participant in the Domino’s promotion bought a 2007 Saab 9-3 Aero convertible for that price. Another bought a Hitachi plasma high-definition TV for $9.99.

Domino’s supported the promotion with a series of three “viral” videos, created by JWT New York, which appeared on social networking websites. The videos featured characters, complete with MySpace profiles, who wanted to sell the big-ticket items.

One series, called “MacKenzie Gets What MacKenzie Wants,” in which a female character offered her Saab for $9.99 because it was the wrong color, generated more than 2 million views.

Ann Arbor, Mich.-based Domino’s, which has 8,238 pizza delivery outlets worldwide, positions itself generally as offering “great deals” and decided that eBay would be a logical marketing partner because of the deals consumers find there every day, Drueke said.

“We wanted to connect with somebody that had the same characteristics we do,” she said.

At the same time, Domino’s was aware that instead of “interrupting” consumers with promotional messages that they’d probably ignore anyway, it needed to engage them with the brand.

“When we think about brands in QSR and all the different categories—retail, packaged goods, electronics—cool brands are brands that are authentic and original and what people want to spend time with,” Drueke said. “We’ve had great feedback from our customers.”

Holding consumers’ interest is the key, and choices as to which media can accomplish that are changing, she said.

“We’re going to continue to do things and create things that people want to spend time with,” Drueke said. “That may or may not be right in front of the television set anymore.”

For Bob Evans Restaurants, hosting a charity auction on eBay and a supporting blog was a tactic designed to appeal to a broader customer base, said Tammy Roberts Myers, director of investor relations and corporate communications for the 589-unit chain based in Columbus, Ohio.

Over the years, Bob Evans’ core customers have skewed older, she said, and the auction and blog were “a great way” to reach younger diners.

The auction raised $1,825 for Habitat for Humanity, which builds houses for low-income families. Combined with in-store donations, the promotion raised nearly $60,000 for the charity.

The Bob Evans blog kept track of the auction’s process and drew about 170 viewers a day.

Because Habitat for Humanity builds houses, it just happened to fit in with the construction theme of the ads promoting Stacked and Stuffed Hotcakes, Roberts Myers said. The hotcakes are “built” for customers, she said, and the ads feature a spokesman at a construction scene talking about them.

The auction winner will get to choose either of two three-day trips for four: to the Bob Evans Farm Homestead Museum in Rio Grande, Ohio, to have breakfast with restaurant founder Bob Evans and chairman and chief executive Steve Davis, or to any city where a Bob Evans restaurant is located.

“We thought, ‘Wouldn’t it be great if we could auction breakfast with the founder on eBay?’ ” Roberts Myers said. “That does a great thing for Habitat for Humanity, and it helps us extend our reach to a slightly younger and broader audience.”

The auction was quite a departure in tactics for Bob Evans, which has limited itself to traditional marketing in the past.

“We went out on a limb,” said Roberts Myers, who considers the chain’s first foray onto eBay a success, and maybe not the last.

“Who knows? There could be another opportunity later,” she said.