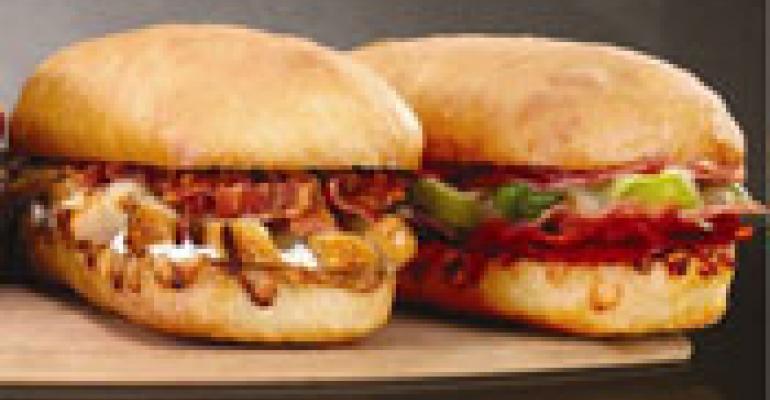 Domino’s to add subs as delivery market revs up

ANN ARBOR Mich. Domino’s Pizza plans to add oven-baked sub sandwiches to its delivery menu beginning next Monday in part to boost lunch sales, the pizza chain said Monday. The delivery specialist’s menu extension comes as a host of direct and indirect competitors are either adding delivery service or increasing the options they offer to at-home patrons.

The chain said it would initially offer four sandwiches: Philly Cheese Steak, Chicken Bacon Ranch, Chicken Parm and Italian. Each is priced at about $4.99, though customers need a minimum order of $8 to $10, depending on the market, to qualify for delivery, Domino’s said. Patrons also will have to pay a delivery fee of $1 to $2.

The sandwich rollout will be supported by an aggressive television and direct-mail campaign, and should reach all 5,107 U.S. stores by Sept. 22, Domino's said. Although it described the move as a way to greatly increase lunch business, the sandwiches will be available all day.

With the rollout, Domino’s will be competing against such sub sandwich specialists as 29,000-unit Subway, which has been adding delivery in some of its urban markets, and Quiznos, which now offers delivery from about half of its 4,000 shops, with 400 more units expected to add the service by the fall. For delivery service, Quiznos requires a minimum purchase of $8 and charges a $2 fee.

Domino’s rollout of sandwiches comes as Pizza Hut and parent company Yum! Brands Inc. are lauding the success of the chain's Tuscani baked pasta line, which was added as a takeout and delivery option about five months ago. Pizza Hut also has retrofitted some 1,500 stores with a wing takeout and delivery concept-within-a-concept called Wing Street.

Meanwhile, a few casual-dining chains, including The Cheesecake Factory, are experimenting with delivery service.

Domino’s reported a same-store sales fall of 5.4 percent in its second quarter ended July 22, which followed a 5.2-percent drop in its first quarter.