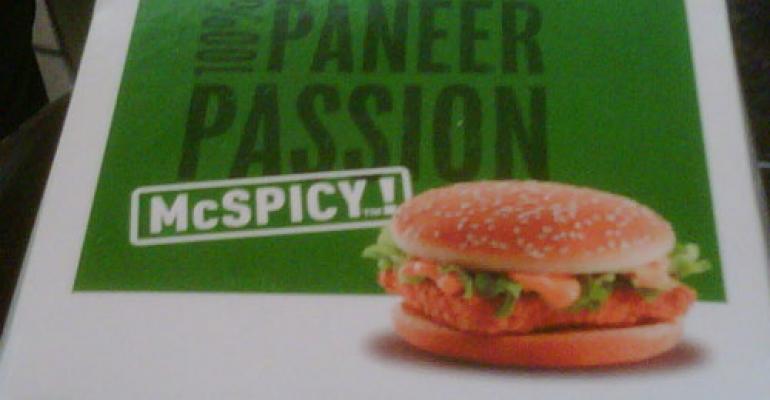 Dispatch from India: A taste of McD, CPK

Observations from NRN’s Bret Thorn as he travels with U.S. restaurant brands in India

EDITOR’S NOTE: Nation’s Restaurant News reporter Bret Thorn is traveling this week in India on a trip organized by the U.S. Commercial Service for American franchisors, including restaurant chains, that are seeking franchisees in the country. Follow Thorn’s reports and observations on NRN.com, as well as on his blog, Food Writer’s Diary, and Twitter (hashtag #nrninIndia).

Restaurateurs on the franchise trade mission to India were eager to see firsthand how McDonald’s, a pioneer in opening Western-style quick-service restaurants in the country, had modified its menu to suit local tastes.

So on a trip to the High Street Phoenix shopping mall in Mumbai for lunch at the California Pizza Kitchen that had opened there a few months ago, we stopped by the nearby McDonald’s beforehand.

Many tried the Maharajah Mac — India’s answer to the Big Mac — I also sampled the new McSpicy, which is available with chicken or paneer, a sort of solid cottage cheese that is widely used in India.

The Maharaja Mac uses ground chicken instead of ground beef. It’s a small patty, much like the patties in a Big Mac, but the flavor is completely different. I think I identified coriander, but other Indian spices were in there as well, giving the sandwich a certain earthiness without the mild tang of the “special sauce” that it has in the United States. Overall, the Maharaja Mac, which came topped with tomato and sliced red onion, did not have the right flavor profile to satisfy the cravings of a Big Mac Attack.

The McSpicy Paneer, on the other hand, was very similar to a Filet-O-Fish. The paneer proved to be an able vehicle to carry all of the flavors present in the McDonald’s classic, minus the fish, which is very mild in the American menu item.

I also had a bite of someone else’s Aloo Tikki burger, the first sandwich devised specifically for McDonald’s India. It is made with potatoes and peas, and that’s how it tasted, dusted with Indian spices. It was available on the 20-rupee Happy Price menu, and like the Maharaja Mac, did not taste like McDonald’s food. The two sandwiches together, with a Diet Coke, cost 203 rupees, or roughly $4.50.

The CPK menu was a surprise after eating at McDonald’s: It resembled the American menu almost exactly, minus the beef. The meat lover’s pizza was redolent of pepperoni and sausage, and the margherita pizza’s flavor was dominated by strips of shredded basil.

In discussing the meals, one restaurateur suggested that changes on the scale of McDonald’s might be necessary for deep penetration into the country, but that a CPK approach could do well in large cities with cosmopolitan diners to support them.